CHESTNUT HILL, MA (5/18/2011) – Carbon found within ancient rocks has played a crucial role developing a time line for the emergence of biological life on the planet billions of years ago. But applying cutting-edge technology to samples of ancient rocks from northern Canada has revealed the carbon-based minerals may be much younger than the rock they inhabit, a team of researchers report in the latest edition of the journal Nature Geoscience.

The team – which includes researchers from Boston College, the Carnegie Institution of Washington, NASA's Johnson Space Center and the Naval Research Laboratory – says new evidence from Canada's Hudson Bay region shows carbonaceous particles are millions of years younger than the rock in which they're found, pointing to the likelihood that the carbon was mixed in with the metamorphic rock later than the rock's earliest formation – estimated to be 3.8 to 4.2 billion years ago.

The samples come from the Nuvvuagittuq Supracrustal Belt, a sedimentary banded iron formation located in the Archean Superior craton, one of the earth's ancient continental shields. Samples were subjected to a range of high-tech tests in an effort to more clearly characterize the carbon in the rock.

Traditional techniques used by scientists have involved collecting samples and crushing them into powder and then determining the bulk characteristics of carbon minerals. The new approach relies upon a variety of microscopy and spectroscopy methods to characterize intact micro-fabricated cross-sections of crystalline graphite removed from the rock samples. The results found that the carbon was very young compared to the age of these oldest rock samples ever unearthed.

"The characteristics of the poorly crystalline graphite within the samples are not consistent with the metamorphic history of the rock," said Boston College Assistant Professor of Earth and Environmental Sciences Dominic Papineau, a co-author of the report. "The carbon in the graphite is not as old as the rock. That can only ring a bell and require us to ask if we need to reconsider earlier studies." 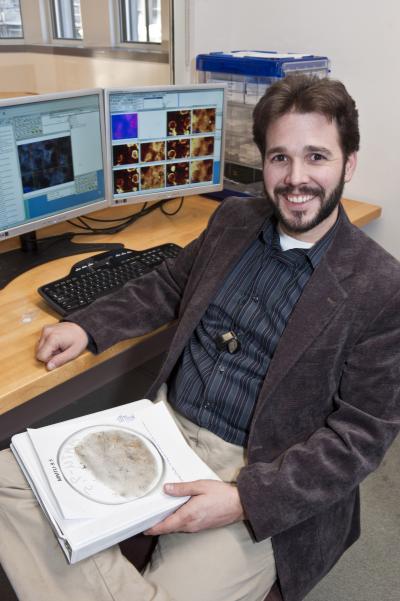 Boston College assistant professor of Earth and environmental sciences Dominic Papineau and colleagues report in the journal Nature Geoscience that carbon laced within ancient rock formations may be millions of years younger than the rock itself, raising questions about the evidence of the earliest signs of life.

Nearly 4,000-million years old samples from Greenland have been used to develop the dominant time line regarding the emergence of the earliest biosphere. The recent findings suggest the biosphere may have emerged millions of years later, a hypothesis that now demands a rigorous study, said Papineau.

"It could be that researchers in the field need to go back to Greenland to restudy these rocks and determine if the the carbonaceous materials are in fact as old as the metamorphosed rock itself," Papineau said.

As the planet evolved, rock and other matter was subjected to a range of temperatures that leave telltale signatures scientists can now study. The team's examination found that the rock samples were subjected to high-grade metamorphism. Yet the crystalline structure of the graphite present in the samples was not, leading scientists to conclude the matter infiltrated the rock at a later stage in time, though the exact timing is not clear at this point.

The presence of carbon and the specific characteristics of that carbon's source material are crucial to understanding the evolution of the early microbial biosphere. The subject of much debate within scientific circles, a new set of assumptions may be required when using the presence of carbon to date milestones in the earth's evolution.

"We can no longer assume that carbon is indigenous in the oldest metamorphosed sedimentary rock," said Papineau. "In very old rocks, the fundamental questions are now whether the carbon is biological in origin and if it is indigenous to the rocks."