PULLMAN, Wash.—Washington State University researchers have found "the most famous wheat gene," a reproductive traffic cop of sorts that can be used to transfer valuable genes from other plants to wheat.

The discovery clears the way for breeders to develop wheat varieties with the disease- and pest-resistance traits of other grasses, using a legion of genetic tools that can reduce crop losses and pesticide use while foregoing the cost, regulatory hurdles and controversy of Genetically Modified Organisms, or GMOs.

"The real exciting part of this gene is that it has tremendous potential for application," said Kulvinder Gill, a WSU professor, who reports his findings in the journal Proceedings of the National Academy of Sciences.

For some 35 million years, the wild ancestors of wheat routinely traded genes as they accidentally cross-bred with each other. But with the rise of agriculture and cultivated wheat 10,000 years ago, the plant's genetic structure changed. Instead of being diploid, with two sets of chromosomes like humans and most other living things, it became polyploid, with, in the case of bread wheat, seven sets of six related chromosomes.

Starting in 1958, just five years after the discovery of DNA's double-helix structure, researchers suspected that a specific gene controls the orderly pairing of wheat chromosomes during reproduction.

"If this gene was not present, there would be chaos in the nucleus," said Gill. "Six chromosomes would pair with each other, and sometimes five chromosomes would go to one cell and one to the other, resulting in a sterile plant. Because of this gene, wheat can be fertile. Without this gene, it would be more like sugar cane, where it is a mess in the nucleus and it can only be vegetatively propagated."

But the gene also prevents wheat from breeding with related ancestors that can contain a vast array of traits preferred by growers.

"This gene would not allow rye chromosomes to pair with wheat," said Gill. "We cannot get a single gene transfer into wheat as long as this gene is present."

Interest in the gene, called Ph1, has spawned scores of research papers, making it what Gill called, "the most famous wheat gene."

In 2006, British researchers writing in the journal Nature said they identified the gene.

"In this paper," said Gill, "we show that their gene is not the Ph1."Knowing their findings would be controversial, Gill and his colleagues spent a year repeating the experiments that led to their conclusion. They are now moving on.

"Now that we have the gene, we can actually use that gene sequence to temporarily silence the gene and make rye and other chromosomes pair with wheat and transfer genes by a natural method into wheat without calling it GMO," Gill said.

Their first effort involves transferring a gene from jointed goatgrass, a wild relative of wheat, to confer resistance to stripe rust. The fungus is considered the world's most economically damaging wheat pathogen, costing U.S. farmers alone some $500 million in lost productivity in 2012.

While facilitated by technology, the actual exchange of genetic material is similar to what has long taken place in nature, only faster. Incorporating the gene transfer into the overall breeding process, researchers can develop a new variety in five years, said Gill.

"If we let wheat evolve for another few millions years in the wild, maybe it will develop enough variation, but we don't have that kind of time," said Gill. "We need to solve this problem today." 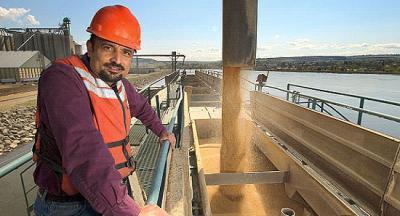 Washington State University wheat researcher Kulvinder Gill has found 'the most famous wheat gene,' a reproductive traffic cop of sorts that can be used to transfer valuable genes from other plants to wheat.