Physicists may have created the smallest drops of liquid ever made in the lab.

That possibility has been raised by the results of a recent experiment conducted by Vanderbilt physicist Julia Velkovska and her colleagues at the Large Hadron Collider, the world's largest and most powerful particle collider located at the European Laboratory for Nuclear and Particle Physics (CERN) in Switzerland. Evidence of the minuscule droplets was extracted from the results of colliding protons with lead ions at velocities approaching the speed of light.

"With this discovery, we seem to be seeing the very origin of collective behavior," said Velkovska, professor of physics at Vanderbilt who serves as a co-convener of the heavy ion program of the CMS detector, the LHC instrument that made the unexpected discovery. "Regardless of the material that we are using, collisions have to be violent enough to produce about 50 sub-atomic particles before we begin to see collective, flow-like behavior."

These tiny droplets "flow" in a manner similar to the behavior of the quark-gluon plasma, a state of matter that is a mixture of the sub-atomic particles that makes up protons and neutrons and only exists at extreme temperatures and densities. Cosmologists propose that the entire universe once consisted of this strongly interacting elixir for fractions of a second after the Big Bang when conditions were dramatically hotter and denser than they are today. Now that the universe has spent billions of years expanding and cooling, the only way scientists can reproduce this primordial plasma is to bang atomic nuclei together with tremendous energy.

The new observations are contained in a paper submitted by the CMS collaboration to the journal Physics Review D and posted on the arXiv preprint server. In addition, Vanderbilt doctoral student Shengquan Tuo recently presented the new results at a workshop held in the European Centre for Theoretical Studies in Nuclear Physics and Related Areas in Trento, Italy. 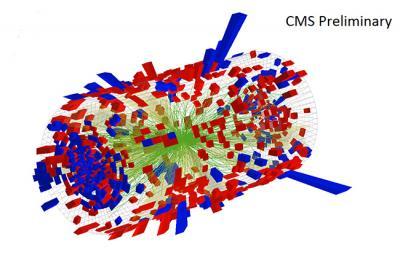 This is a three-dimensional view of a proton-lead collision that produced collective flow behavior. The green lines are the trajectories of the sub-atomic particles produced by the collision reconstructed by the CMS tracking system. The red and blue bars represent the energy measured by the instrument's two sets of calorimeters.

Scientists have been trying to recreate the quark-gluon plasma since the early 2000s by colliding gold nuclei using the Relativistic Heavy Ion Collider (RHIC) at Brookhaven National Laboratory. This exotic state of matter is created when nuclei collide and dump a fraction of their energy into the space between them. When enough energy is released, it causes some of the quarks and gluons in the colliding particles to melt together to form the plasma. The RHIC scientists had expected the plasma to behave like a gas, but were surprised to discover that it acts like a liquid instead.

When the LHC started up, the scientists moved to the more powerful machine where they basically duplicated the results they got at RHIC by colliding lead nuclei.

In what was supposed to be a control run to check the validity of their lead-lead results, the scientists scheduled the collider to smash protons and lead nuclei together. They didn't expect to see any evidence of the plasma. Because the protons are so much lighter than lead nuclei (they have only one-208th the mass), it was generally agreed that proton-lead collisions couldn't release enough energy to produce the rare state of matter.

Last September, the LHC did a brief test run to make sure it was adjusted properly to handle proton-lead collisions. When the results of the run were analyzed, team members were surprised to see evidence of collective behavior in five percent of the collisions—those that were the most violent. In these cases, it appeared that when the "bullet" passed through "apple" it released enough energy to melt some of the particles surrounding the bullet hole. They appeared to be forming liquid droplets about one tenth the size of those produced by the lead-lead or gold-gold collisions.

However, the initial analysis was limited to tracking the motion of pairs of particles. The researchers knew that this analysis could be influenced by another well-known phenomenon, the production of particle jets.

So, when the scheduled proton-lead run took place in January and February, they searched the data for evidence of groups of four particles that exhibit collective motion. After analyzing several billion events, they found hundreds of cases where the collisions produced more than 300 particles flowing together.

According to Tuo, only two models were advanced to explain their observations at the workshop. Of the two, the plasma droplet model seems to fit the observations best. In fact, he reported that the new data is forcing the authors of the competing model – color glass condensate, which attributes the particle correlations to the internal gluon structure of the protons themselves – to incorporate hydrodynamic effects, meaning that it is also describing the phenomenon as liquid droplets.