RIVERSIDE, Calif. — In 2009, a borehole drilled at Krafla, northeast Iceland, as part of the Icelandic Deep Drilling Project (IDDP), unexpectedly penetrated into magma (molten rock) at only 2100 meters depth, with a temperature of 900-1000 C. The borehole, IDDP-1, was the first in a series of wells being drilled by the IDDP in Iceland in the search for high-temperature geothermal resources.

The January 2014 issue of the international journal Geothermics is dedicated to scientific and engineering results arising from that unusual occurrence. This issue is edited by Wilfred Elders, a professor emeritus of geology at the University of California, Riverside, who also co-authored three of the research papers in the special issue with Icelandic colleagues.

"Drilling into magma is a very rare occurrence anywhere in the world and this is only the second known instance, the first one, in 2007, being in Hawaii," Elders said. "The IDDP, in cooperation with Iceland's National Power Company, the operator of the Krafla geothermal power plant, decided to investigate the hole further and bear part of the substantial costs involved."

Accordingly, a steel casing, perforated in the bottom section closest to the magma, was cemented into the well. The hole was then allowed to heat slowly and eventually allowed to flow superheated steam for the next two years, until July 2012, when it was closed down in order to replace some of the surface equipment.

"In the future, the success of this drilling and research project could lead to a revolution in the energy efficiency of high-temperature geothermal areas worldwide," Elders said. 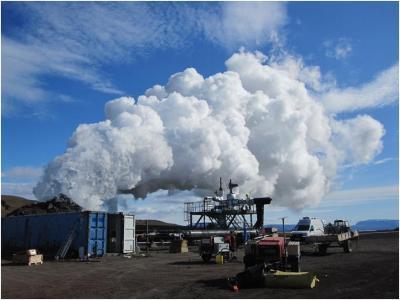 This image shows a flow test of the IDDP-1 well at Krafla. Note the transparent superheated steam at the top of the rock muffler.

He added that several important milestones were achieved in this project: despite some difficulties, the project was able to drill down into the molten magma and control it; it was possible to set steel casing in the bottom of the hole; allowing the hole to blow superheated, high-pressure steam for months at temperatures exceeding 450 C, created a world record for geothermal heat (this well was the hottest in the world and one of the most powerful); steam from the IDDP-1 well could be fed directly into the existing power plant at Krafla; and the IDDP-1 demonstrated that a high-enthalpy geothermal system could be successfully utilized.

Elders explained that in various parts of the world so-called enhanced or engineered geothermal systems are being created by pumping cold water into hot dry rocks at 4-5 kilometers depths. The heated water is pumped up again as hot water or steam from production wells. In recent decades, considerable effort has been invested in Europe, Australia, the United States, and Japan, with uneven, and typically poor, results.

"Although the IDDP-1 hole had to be shut in, the aim now is to repair the well or to drill a new similar hole," Elders said. "The experiment at Krafla suffered various setbacks that tried personnel and equipment throughout. However, the process itself was very instructive, and, apart from scientific articles published in Geothermics, comprehensive reports on practical lessons learned are nearing completion."

The IDDP is a collaboration of three energy companies — HS Energy Ltd., National Power Company and Reykjavik Energy — and a government agency, the National Energy Authority of Iceland. It will drill the next borehole, IDDP-2, in southwest Iceland at Reykjanes in 2014-2015. From the onset, international collaboration has been important to the project, and in particular a consortium of U.S. scientists, coordinated by Elders, has been very active, authoring several research papers in the special issue of Geothermics. 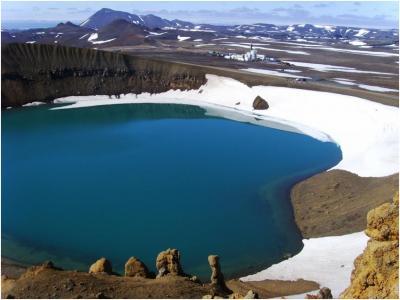 This image shows the drill site of the IDDP-1 well near the explosive volcanic crater Víti. Viti erupted in 1724 AD.