DENALI NATIONAL PARK AND PRESERVE, Alaska — When a breeding wolf dies, its sex and the size of its pack can determine whether that pack continues, according to research published July online by the Journal of Animal Ecology.

In 2012, biologists at Denali National Park and Preserve noted a drop in wolf sightings following the death of a breeding female from a pack that lived along the Denali Park Road. This was one of several instances where the death of an individual wolf from legal trapping or hunting sparked widespread attention in recent years.

"This isn't the first time we have noticed that the loss of a breeding wolf can affect the fate of the pack. We thought it would be valuable to systematically look at what happens to the pack and population following the death of a breeder," said author Bridget Borg, a University of Alaska Fairbanks biology graduate student and National Park Service biologist.

"Given the park's current low wolf densities and small average pack sizes, we are concerned about harvest of wolves from packs that reside primarily within the park," said Don Striker, Superintendent of Denali National Park and Preserve. "The death of a breeding wolf could harm the packs that provide the greatest opportunities for park visitors to see a wolf in the wild, either through a lack of reproduction or the loss of the entire pack."

Gray wolves typically live in packs consisting of the parents and their offspring from one or more years. Turnover among young members of a pack is common as they leave to search for mates and start packs of their own. Breeding members typically spend more time in the pack and act as "social glue." 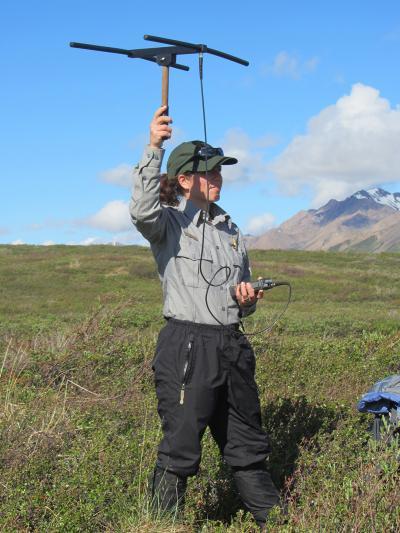 Borg and other park researchers and collaborators from UAF and the Alaska Department of Fish and Game examined data collected on 70 packs during a long-term study of wolves in Denali National Park and Preserve. They found that although breeder death preceded or coincided with 77 percent of the cases where packs were no longer found, the death of a breeding individual did not always lead to the end of a pack. In about two out of three cases where a breeder died, the pack continued.

"It appears that the sex of the breeder that was lost and the size of the pack prior to that loss were important factors explaining pack fate following the death of a breeder," Borg said. "The probability of a pack continuing was less if a female died or if the pack was small prior to the death."

Borg's data also suggests that the death of a breeder has a greater influence on a pack if the wolf died during the pre-breeding or breeding season.

"We noticed that human-caused mortality rates were highest during the winter and spring, which correspond to the pre-breeding and breeding seasons for wolves," said Laura Prugh, co-author and wildlife ecologist at the UAF Institute of Arctic Biology. "Harvest may lower the odds of pack survival because of this timing, especially when pack sizes are small."

Surprisingly, higher rates of breeder mortality and pack disruption did not correspond to lower population growth, indicating that the wolf population was resilient to loss of breeding individuals at a population level, according to the authors. They suggest that wolves may compensate for the death of breeders in a variety of ways, such as rapid replacement of breeders or increased reproductive success the following year.

Although breeder loss appeared to have little effect on Denali wolves at the population level, the loss of individuals may be important at a local level.

The researchers note that rates of denning and successfully raising pups decreased for packs in which a breeder died or was killed but the pack remained together. The wolf packs that successfully raise pups near the park road tend to be those seen most often by tourists. 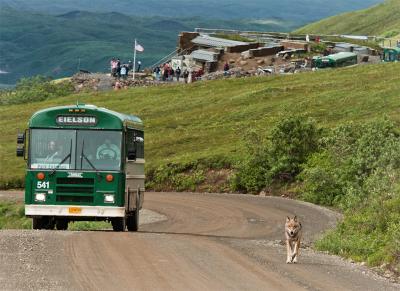 A gray wolf, a favorite sight for visitors, trots along the park road in front of a tourist bus at Denali National Park and Preserve.