With 'biological sunscreen,' mantis shrimp see the reef in a whole different light

In an unexpected discovery, researchers have found that the complex eyes of mantis shrimp are equipped with optics that generate ultraviolet (UV) color vision. Mantis shrimp's six UV photoreceptors pick up on different colors within the UV spectrum based on filters made from an ingredient other animals depend on as built-in biological sunscreen, according to research reported in the Cell Press journal Current Biology on July 3.

"The mantis shrimp visual system contains six types of photoreceptors functioning completely outside the visual range of humans," says Michael Bok of the University of Maryland Baltimore County. "Surprisingly, they produce their six UV photoreceptors using only two types of visual pigments by pairing one visual pigment with one of four UV filters. The UV filters block certain wavelengths of light from reaching the photoreceptors, chromatically shifting their sensitivity." 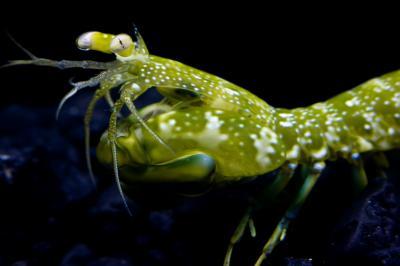 The filters are composed of so-called mycosporine-like amino acids (or MAAs), which are commonly found in the skin or exoskeleton of marine organisms, where they absorb damaging UV rays. They do the same thing in mantis shrimp eyes, but for an entirely novel purpose.

"The effect is akin to putting red-tinted glasses over your eyes that block other wavelengths of light, except this is being done at the photoreceptor cellular level in shrimp," Bok explains.

Exactly why mantis shrimp need such a sophisticated visual system remains mysterious, Bok says. Mantis shrimp use their eyes to navigate and spot predators and prey on the vibrant reef that is their home. Mantis shrimp also have complex social interactions that are likely mediated by distinct visual signals on their bodies.

Their complex eyes, which include 16 or more types of photoreceptors in all, may provide them with a complex color and polarization visual system without a big brain to post-process lots of information. In other words, their eyes may sense and respond to complex visual inputs without the need to think very hard about it, Bok explains. 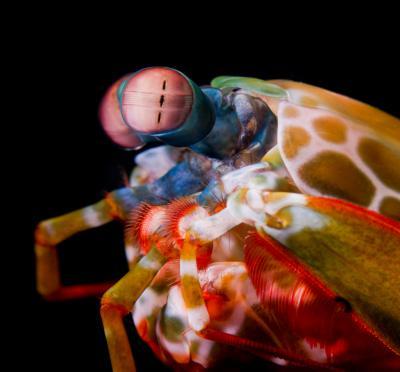 This is an image of mantis shrimp eyes.

Despite the new discovery, the researchers say, it's still tough to imagine the reef as mantis shrimp see it. "The way their eyes are built and how visual information is processed in their brains is so fundamentally different [from] humans that is very difficult to conceptualize what the world actually looks like to them," Bok says. 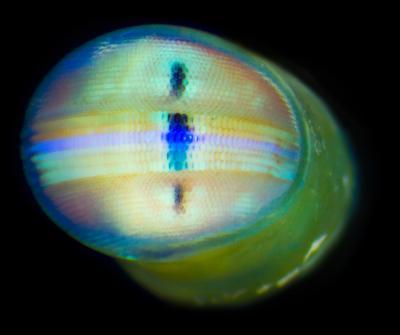 This is a close up Mantis Shrimp Eyes