CHAMPAIGN, Ill. — Researchers report that they have determined the precise chemical structure of the HIV capsid, a protein shell that protects the virus's genetic material and is a key to its virulence. The capsid has become an attractive target for the development of new antiretroviral drugs.

The report appears as the cover article in the journal Nature.

Scientists have long sought to understand how the HIV capsid is constructed, and many studies have chipped away at its mystery. Researchers have used a variety of laboratory techniques – cryo-electron microscopy, cryo-EM tomography, nuclear magnetic resonance spectroscopy and X-ray crystallography, to name a few – to peer at individual parts of the capsid in revealing detail, or to get a sense of the whole.

Until the arrival of petascale supercomputers, however, no one could piece together the entire HIV capsid – an assemblage of more than 1,300 identical proteins forming a cone-shaped structure – in atomic-level detail. The simulations that added the missing pieces to the puzzle were conducted during testing of Blue Waters, a new supercomputer at the National Center for Supercomputing Applications at the University of Illinois.

"This is a big structure, one of the biggest structures ever solved," said U. of I. physics professor Klaus Schulten, who, with postdoctoral researcher Juan R. Perilla, conducted the molecular simulations that integrated data from laboratory experiments performed by colleagues at the University of Pittsburgh and Vanderbilt University. "It was very clear that it would require a huge amount of simulation – the largest simulation ever published – involving 64 million atoms." (Watch a video about the research.)

Previous research had established that the HIV capsid contained a number of identical proteins. Scientists knew that the proteins were arranged into pentagons and hexagons, and guessed that the pentagons formed the most tightly rounded corners of the capsid shape seen under an electron microscope. But they did not know how many of these protein building blocks were needed, or how the pentagons and hexagons fit together to form the capsid. 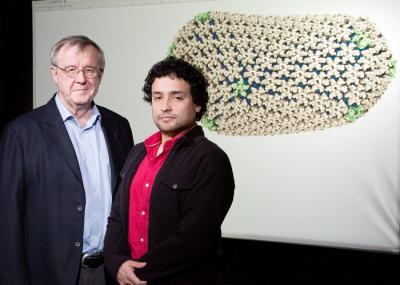 Led by structural biology professor Peijun Zhang, the Pittsburgh team exposed the building blocks of the capsid to high salt conditions, leading the proteins to assemble into tubes made entirely of hexagons. Further experiments revealed interactions among specific regions of the proteins that were "critical for capsid assembly and stability, and for viral infectivity," the researchers report.

The team also conducted cryo-electron tomography of the complete capsid, slicing it into sections to get a rough idea of its overall shape.

Perilla and Schulten used the data from these experiments and from their own simulations of the interactions between the hexamers and pentamers to conduct a series of large-scale computer simulations that accounted for the structural properties of the capsid's building blocks.

"The work of matching the overall capsid, made of 64 million atoms, to the diverse experimental data can only be done through computer simulation using a methodology we have developed called molecular dynamic flexible fitting," Schulten said. "You basically simulate the physical characteristics and behavior of large biological molecules but you also incorporate the data into the simulation so that the model actually drives itself toward agreement with the data."

The simulations revealed that the HIV capsid contained 216 protein hexagons and 12 protein pentagons arranged just as the experimental data had indicated. The proteins that composed these pentagons and hexagons were all identical, and yet the angles of attachment between them varied from one region of the capsid to another.

"That is really the mystery of it," Schulten said. "How can a single type of protein form something as varied as this thing? The protein has to be inherently flexible."

The pentagons "induced acute surface curvature," the researchers reported, allowing the capsid to be a closed structure that would not have been possible if the capsid were composed only of hexagons.

Possessing a chemically detailed structure of the HIV capsid will allow researchers to further investigate how it functions, with implications for pharmacological interventions to disrupt that function, Schulten said.

"The HIV capsid has actually two completely opposite properties," he said. "It has to protect the genetic material but once it gets into the cell it has to release the genetic material. That has to happen with really good timing – too quick is not good, too slow is not good. And this is a moment when you can throw a wrench into the system."

Some of the most potent antiviral drugs target the viral capsid, Schulten said.

"The timing of the opening of the capsid is essential for the degree of virulence of the virus," he said. "This is where we could perhaps best interfere with HIV infection." 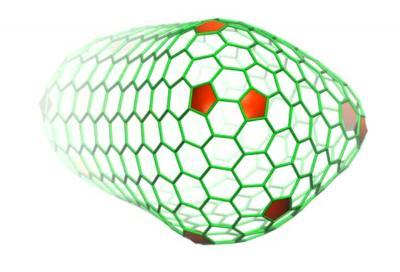 The researchers used the supercomputer Blue Waters to determine the complete HIV capsid structure, a simulation that accounted for the interactions of 64 million atoms.