SALT LAKE CITY - Brain scans from nearly 200 adolescent boys provide evidence that the brains of compulsive video game players are wired differently. Chronic video game play is associated with hyperconnectivity between several pairs of brain networks. Some of the changes are predicted to help game players respond to new information. Other changes are associated with distractibility and poor impulse control. The research, a collaboration between the University of Utah School of Medicine, and Chung-Ang University in South Korea, was published online in Addiction Biology on Dec. 21, 2015.

"Most of the differences we see could be considered beneficial. However the good changes could be inseparable from problems that come with them," says senior author Jeffrey Anderson, M.D., Ph.D., associate professor of neuroradiology at the University of Utah School of Medicine.

Those with Internet gaming disorder are obsessed with video games, often to the extent that they give up eating and sleeping to play. This study reports that in adolescent boys with the disorder, certain brain networks that process vision or hearing are more likely to have enhanced coordination to the so-called salience network. The job of the salience network is to focus attention on important events, poising that person to take action. In a video game, the enhanced coordination could help a gamer to react more quickly to the rush of an oncoming fighter. And in life, to a ball darting in front of a car, or an unfamiliar voice in a crowded room. 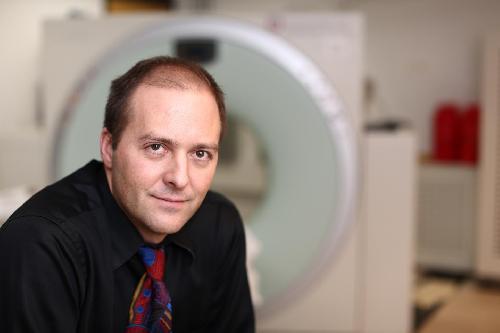 Jeffrey Anderson, M.D., Ph.D., associate professor of neuroradiology at the University of Utah School of Medicine, is senior author of a study investigating differences in the brains of adolescent boys who are compulsive video game players. Credit: University of Utah Health Sciences

"Hyperconnectivity between these brain networks could lead to a more robust ability to direct attention toward targets, and to recognize novel information in the environment," says Anderson. "The changes could essentially help someone to think more efficiently." Follow up studies will be needed to directly determine whether the boys with these brain differences do better on performance tests.

A more troublesome finding is a coordination between two brain regions, the dorsolateral prefrontal cortex and temporoparietal junction, that is more strong than in individuals who are not compulsive video game players. "Having these networks be too connected may increase distractibility," says Anderson. The same change is seen in patients with neuropsychiatric conditions such as schizophrenia, Down's syndrome, and autism, and in people with poor impulse control. At this point it's not known whether persistent video gaming causes rewiring of the brain, or whether people who are wired differently are drawn to video games.

This work is the largest, most comprehensive investigation of differences in the brains of compulsive video game players to date, says first author Doug Hyun Han, M.D., Ph.D., professor at Chung-Ang University School of Medicine and adjunct associate professor at the University of Utah School of Medicine. Study participants were screened in South Korea, where video game playing is a major social activity, much more than in the United States. The Korean government supports his research with the goal of finding ways to identify and treat addicts.

In this study, researchers performed magnetic resonance imaging on 106 boys between the ages of 10 to 19 who were seeking treatment for Internet gaming disorder, a psychological condition that the Diagnostic and Statistical Manual of Mental Disorders (DSM-5) says warrants further research. The brain scans were compared to those from 80 boys without the disorder, and analyzed for regions that were activated simultaneously when participants were at rest. The more frequently two brain regions light up at the same time, the stronger the functional connectivity.