Wildfires can cause dangerous debris flows 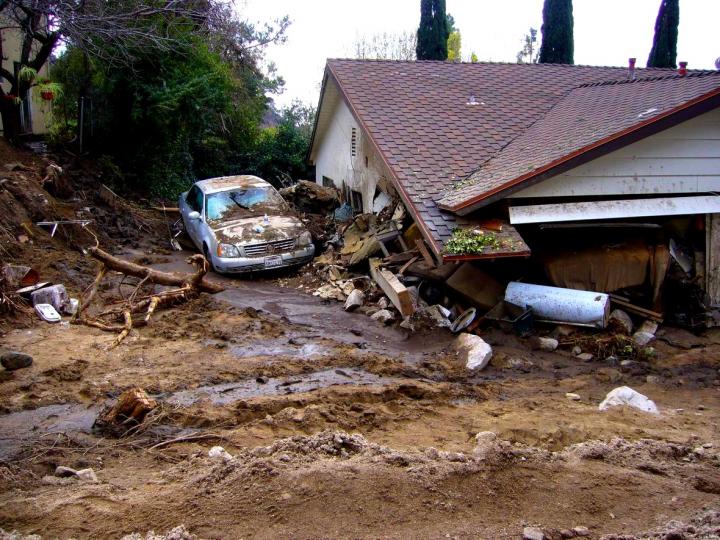 IMAGE: House damaged by debris flows generated in Los Angeles County's Mullally Canyon in response to a rainstorm on February 6, 2010.

Wildfires don't stop being dangerous after the flames go out. Even one modest rainfall after a fire can cause a deadly landslide, according to new UC Riverside research.

Instead, the rainwater runs off the soil surface causing debris flows, which are fast-moving landslides that usually start on steep hills and accelerate as they move.

"The water doesn't behave like water anymore, it's more like wet cement," Guilinger said. "It can pick up objects as big as boulders that can destroy infrastructure and hurt or even kill people, which is what happened after the 2018 Thomas fire in Montecito."

Guilinger and his team of mentors and collaborators wanted to understand in detail how multiple storm cycles affect an area that's been burned by wildfire, since Southern California tends to have much of its rain in the same season.

The team headed to the burn scar caused by the 23,000-acre Holy Fire near Lake Elsinore to observe this phenomenon, and their results have recently been published in the Journal of Geophysical Research: Earth Surface.

"It's only recently that technology has advanced to the point that we can directly monitor soil erosion at extremely small scales," said Andrew Gray, assistant professor of watershed hydrology and Guilinger's advisor. Gray's laboratory works to understand how wildfire impacts the movement of water and sediment through landscapes after wildfire.

Even with the latest technology, the data was not easy to obtain. To deploy their ground-based laser scanner, which uses visible and infrared waves to reconstruct surfaces down to millimeter accuracy, the scientists had to climb steep hill slopes. They also deployed drones in collaboration with Nicolas Barth, assistant professor of geomorphology, in order to zoom out and see up to 10 hectares of land after the storms.

What they found is that most of the soil in channels at the bottom of valleys between hill slopes eroded during the first few rains, even though the rains were relatively modest. The channels fill with material during the years between fires as well as in response to fire, with rain then causing rapid erosion resulting in the debris flows.

"This proves the first storm events that strike an area are the most critical," Guilinger said. "You can't really mitigate them at the source. Instead, people downstream need to be aware of the dangers, and land managers need hazard modeling tools to help them respond effectively and create a plan to catch the sediment as it flows."

U.S. Geological Survey models incorporate widely available 10-meter data for watershed slopes and information about burn severity from satellite images to estimate the probability and magnitude of debris flow that would occur under a given amount of rainfall.

However, elevation data at the 1-meter scale is becoming more widely available in fire-prone areas like California. This more refined data could allow the researchers to extract finer-scale information, such as variations in hill slope gradient and the shape of water channels that may play a large role in controlling debris flows.

"We can use data like these and the results of studies like ours to inform dynamically updating hazard models in the future," Guilinger said. "Rather than have a single set of predictions for the entire wet season, we may be able to update these models after each storm."

Guilinger plans to use funding from the federal Joint Fire Science Program to improve upon existing hazard models.

"This could prove very useful to land managers either immediately affected by or planning to mitigate the dangerous aftermath of wildfires," he said.