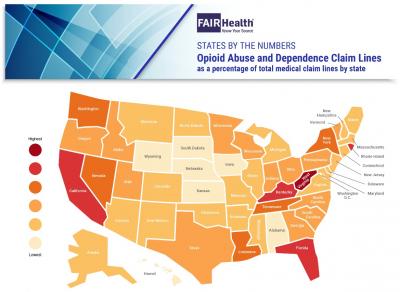 IMAGE: The heat map represents opioid abuse and dependence claim lines as a percentage of total medical claim lines by state in 2017 from the FAIR Health private healthcare insurance data...

NEW YORK, NY--August 14, 2018--Whether treatment for opioid abuse and dependence most commonly emphasized methadone administration, naltrexone injection, group psychotherapy or another procedure in 2017 depended on the state or region where the patient received care, according to a new white paper and state-by-state infographics from FAIR Health, a national, independent, nonprofit organization dedicated to bringing transparency to healthcare costs and health insurance information. Which procedures made up the largest share of total expenditures for opioid abuse and dependence also varied by region and state.

Analyzing 2017 data from its database of more than 26 billion privately billed healthcare claim records dating back to 2002, FAIR Health identified the top 10 procedure codes for specific treatments and services associated with opioid abuse and dependence diagnoses by utilization and aggregate cost in each US census region (Northeast, Midwest, South, West) and also reported the top 5 codes by utilization and aggregate cost in each state and the District of Columbia. Procedures include therapeutic procedures and other services, such as drug tests and visits to doctor's offices or emergency departments (EDs).

Among the regional differences the study revealed:

Methadone administration (H0020) was one of the 10 most common procedures by utilization in every region, but it was among the top 10 by cost in only one region, the Northeast.

Naltrexone injection (J2315) was in the top 10 list by cost in only one region, the Midwest.

Group psychotherapy (CPT® 90853) was one of the 10 most common procedures by utilization in every region except the South.

The top 10 procedures by utilization in the South included 7 drug tests or test-related procedures, more than in any other region.

The top 10 procedures by cost in the West included 6 therapeutic procedures, more than in any other region.

Two outpatient rehabilitative services were found in the top 10 lists by utilization or cost only in the South and West: intensive outpatient treatment (H0015) and partial hospitalization (S0201).

Two inpatient treatments, sub-acute detoxification (H0010) and short-term residential (H0018), were included among the top 10 procedures by cost in one region, the West.

ED visits were found in the top 10 lists by cost only in the Northeast and Midwest.

Across states, the study found these differences, among others:

Only New York had group counseling (H0005) as one of its five most common procedures by utilization and cost.

Only five states--Delaware, Nebraska, North Dakota, South Dakota and Wisconsin--included psychotherapy, 45 minutes (CPT 90834), as one of their five most common procedures by utilization.

Only California had intensive outpatient treatment in its top five list by utilization.

Sub-acute detoxification appeared in the top five lists of only two states, Mississippi and Tennessee, and there only by cost.

Dr. Martin A. Makary, Johns Hopkins Professor of Health Policy, said: "FAIR Health has issued an excellent study of an important aspect of the opioid crisis. Treatment of opioid abuse and dependence should be driven by science. This report represents a step in that direction."

FAIR Health President Robin Gelburd commented: "Our study unveils a tapestry of variation by region and state in the procedures most commonly associated with opioid abuse and dependence. The findings transform the states into living laboratories, offering opportunities to research the outcomes linked to the different treatment strategies."