Why Hurricane Irene fizzled as it neared New Jersey in 2011

A dynamic process that cools the coastal ocean and can weaken hurricanes was discovered as Hurricane Irene made landfall in New Jersey, according to a Rutgers University-led study published today.

The study's findings could help reduce the uncertainty in hurricane intensity forecasts for hurricanes and typhoons that cross coastal ocean waters before striking populated shorelines. 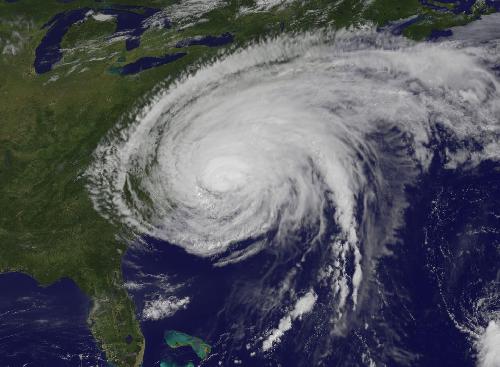 "This is a missing piece required to close the intensity gap for land-falling mid-Atlantic hurricanes in summer," said Greg Seroka, a study coauthor and doctoral candidate in Rutgers' Department of Marine and Coastal Sciences.

The study, published online in Nature Communications, used observations and models from an ocean observatory that has operated for more than a decade in the mid-Atlantic as part of the U.S. Integrated Ocean Observing System (IOOS) network.

"We used IOOS to assemble an unprecedented view of a land-falling hurricane during the highly stratified summer season. We discovered new processes responsible for rapid ocean cooling that reduce storm intensities," said Scott Glenn, the study's lead author and a professor at Rutgers.

Stratification is when the ocean is divided into a warm surface water layer and a cold bottom layer in summer.

While accurate forecasts of Irene's track provided time for preparations and coastal evacuations, the top wind speeds in Irene's official forecasts along the mid-Atlantic coast were too high. Uncertainties in intensity forecasts can lead to unnecessary preparation costs, future public skepticism about storm warnings, and other impacts.

Many people did not immediately heed the warnings for Hurricane Sandy in 2012 because Irene wasn't as bad as forecast. Irene weakened to tropical storm strength just before it hit New Jersey.

Incorporating coastal ocean water conditions in forecasts of storm intensity and impacts will be increasingly critical in the Earth's mid-latitude areas as sea levels rise and peak tropical cyclone intensities migrate toward the poles, according to the study.

"The mid-Atlantic's extensive network of surface current mapping radars indicated that the strong winds on the leading edge of the storm set up the circulation pattern that cooled the ocean surface," said Rutgers' Hugh Roarty, study coauthor and regional coordinator for the radar network.

"Then the ocean and atmospheric models confirmed the forcing mechanisms for the cooling process and its impact on the storm," said Travis Miles, assistant research professor at Rutgers and study coauthor.

"Satellite imagery from before and after the storm revealed that the ocean surface cooled up to 11 degrees Celsius, or 20 degrees Fahrenheit," said Oscar Schofield, a Rutgers professor and study coauthor.

Josh Kohut, another coauthor and Rutgers associate professor, leads a U.S. Environmental Protection Agency and N.J. Department of Environmental Protection marine water monitoring program that helped make the discovery. "A U.S. EPA- and N.J. DEP-funded underwater glider demonstrated that most of the cooling took place ahead of Irene's eye," he said.

Robert Forney, a Rutgers undergraduate who participated in the study, said the researchers subsequently "examined the 30-year historical record and found that the cooling occurred in every hurricane that crossed the mid-Atlantic coastal waters in summer."

"We then looked at typhoons in Asia, and found extensive cooling occurred in Super Typhoon Muifa as it crossed the Yellow Sea" in 2011, said Yi Xu, a study coauthor who earned a Ph.D. at Rutgers and is now a researcher at East China Normal University in Shanghai, China.