Why is Earth so biologically diverse? Mountains hold the answer 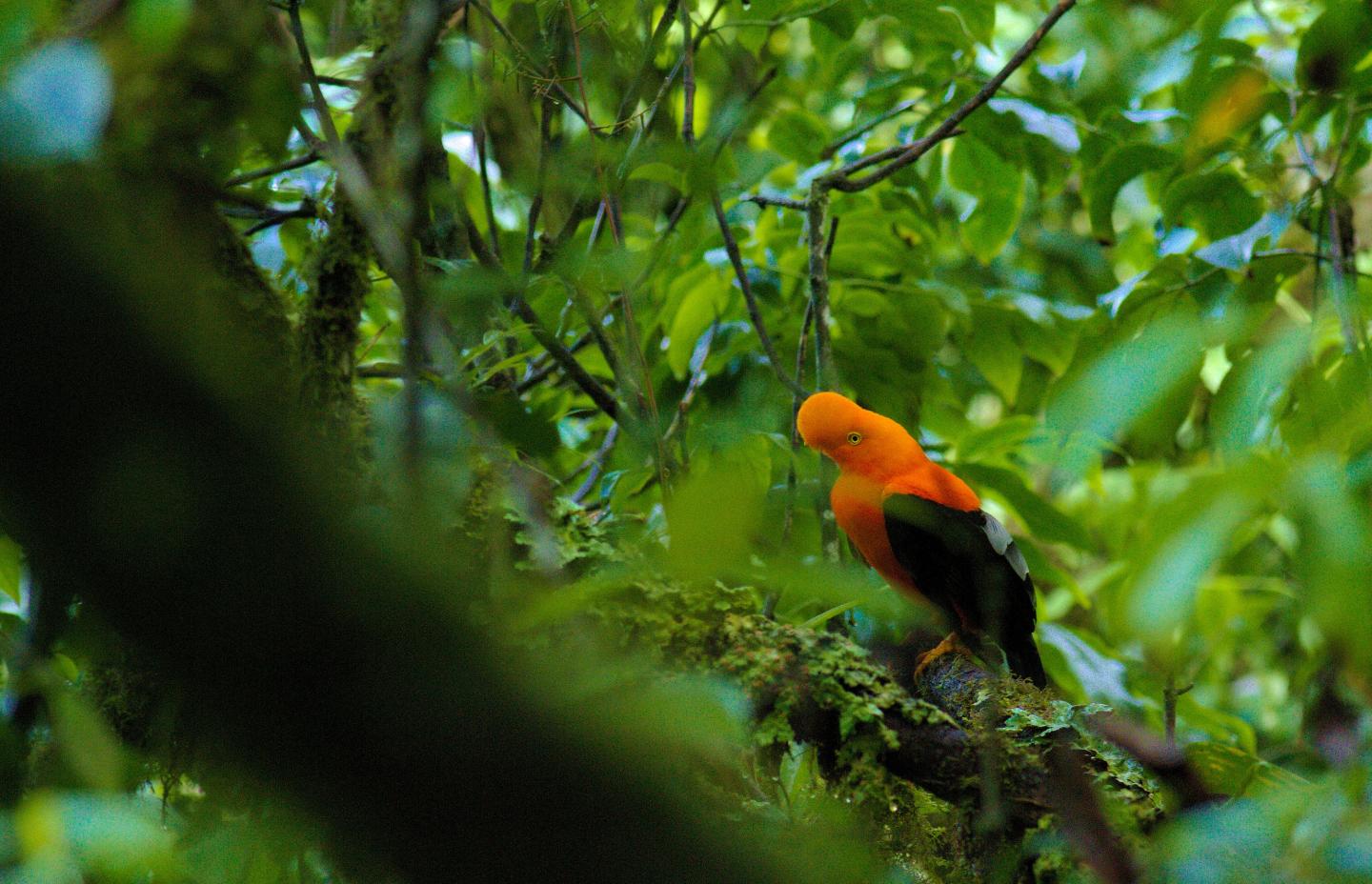 IMAGE: Andean cock-of-the-rock at its lek at 2000 m in the Peruvian Andes. Photographer: Jesper Sonne/CMEC

Life on Earth is amazingly diverse, and exhibits striking geographical global patterns in biodiversity. A pair of companion papers published Sept. 13 in Science reveal that mountain regions -- especially those in the tropics -- are hotspots of extraordinary and baffling richness. Although mountain regions cover only 25% of Earth's land area, they are home to more than 85% of the world's species of amphibians, birds, and mammals, and many of these are found only in mountains.

What determines global patterns of biodiversity has been a puzzle for scientists since the days of von Humboldt, Darwin, and Wallace. Yet, despite two centuries of research, this question remains unanswered. The global pattern of mountain biodiversity, and the extraordinarily high richness in tropical mountains in particular, is documented in two companion Science review papers this week. The papers focus on the fact that the high level of biodiversity found on mountains is far beyond what would be expected from prevailing hypotheses.

"The challenge is that, although it is evident that much of the global variation in biodiversity is so clearly driven by the extraordinary richness of tropical mountain regions, it is this very richness that current biodiversity models, based on contemporary climate, cannot explain: mountains are simply too rich in species, and we are falling short of explaining global hotspots of biodiversity," says Professor Carsten Rahbek, lead author of both review papers published in Science.

To confront the question of why mountains are so biologically diverse, scientists at the Center for Macroecology, Evolution and Climate (CMEC) at the GLOBE Institute of the University of Copenhagen work to synthesize understanding and data from the disparate fields of macroecology, evolutionary biology, earth sciences, and geology. The CMEC scientists are joined by individual collaborators from Oxford University, Kew Gardens, and University of Connecticut.

Part of the answer, these studies find, lies in understanding that the climate of rugged tropical mountain regions is fundamentally different in complexity and diversity compared to adjacent lowland regions. Uniquely heterogeneous mountain climates likely play a key role in generating and maintaining high diversity.

"People often think of mountain climates as bleak and harsh," says study co-leader Michael K. Borregaard. "But the most species-rich mountain region in the world, the Northern Andes, captures, for example, roughly half of the world's climate types in a relatively small region--much more than is captured in nearby Amazon, a region that is more than 12 times larger".

Stressing another unique feature of mountain climate, Michael explains, "Tropical mountains, based in fertile and wet equatorial lowlands and extending into climatic conditions superficially similar to those found in the Arctic, span a gradient of annual mean temperatures over just a few km as large as that found over 10,000 km from the tropical lowlands at Equator to the arctic regions at the poles. It's pretty amazing if you think about it".

Another part of the explanation of the high biodiversity of certain mountains is linked to the geological dynamics of mountain building. These geological processes, interacting with complex climate changes through time, provide ample opportunities for evolutionary processes to act.

"The global pattern of biodiversity shows that mountain biodiversity exhibits a visible signature of past evolutionary processes. Mountains, with their uniquely complex environments and geology, have allowed the continued persistence of ancient species deeply rooted in the tree of life, as well as being cradles where new species have arisen at a much higher rate than in lowland areas, even in areas as amazingly biodiverse as the Amazonian rainforest," says Professor Carsten Rahbek.

From ocean crust, volcanism and bedrock to mountain biodiversity

Another explanation of mountain richness, says the study, may lie in the interaction between geology and biology. The scientists report a novel and surprising finding: the high diversity is in most tropical mountains tightly linked to bedrock geology--especially mountain regions with obducted, ancient oceanic crust. To explain this relationship between geology and biodiversity, the scientists propose, as a working hypothesis, that mountains in the tropics with soil originating from oceanic bedrock provide exceptional environmental conditions that drive localized adaptive change in plants. Special adaptations that allow plants to tolerate these unusual soils, in turn, may drive speciation cascades (the speciation of one group leading to speciation in other groups), all the way to animals, and ultimately contribute to the shape of global patterns of biodiversity.

The legacy of von Humboldt - his 250th anniversary

Acknowledging von Humboldt's contribution to our understanding of the living world, Professor Carsten Rahbek, one of the founding scientists of the newly established interdisciplinary GLOBE Institute at the University of Copenhagen says:

"Our papers in Science are a testimony to the work of von Humboldt, which truly revolutionized our thinking about the processes that determine the distribution of life. Our work today stands on the shoulders of his work, done centuries ago, and follows his approach of integrating data and knowledge of different scientific disciplines into a more holistic understanding of the natural world. It is our small contribution of respect to the legacy of von Humboldt."