Whitebark pine trees: Is their future at risk?

There's trouble ahead for the whitebark pine, a mountain tree that's integral to wildlife and water resources in the western United States and Canada.

Over the last decade, some populations of whitebark pines have declined by more than 90 percent. But these declines may be just the beginning.

New research results, supported by the National Science Foundation (NSF) and published today in the Journal of Ecology, suggest that as pine stands are increasingly fragmented by widespread tree death, surviving trees may be hindered in their ability to produce their usually abundant seeds.

Each year, pollen from male cones is carried on the air to fertilize female seed cones perched atop nearby trees.

"But as more and more whitebark pines die, every year becomes a low-cone year." 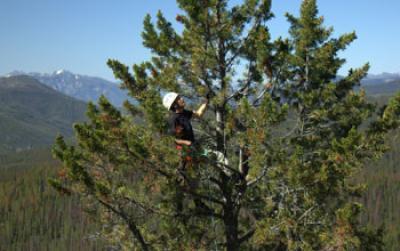 In isolated pockets of trees, the gene pool is also diminished, meaning the seeds produced may be less viable over time.

"By combining field data on seed and pollen production for whitebark pines with models that simulate mature cone production, this study helps to answer that question for these pines."

To reach their conclusions, the scientists had to look back in time.

Whitebark pine seeds are an essential food source for many animals in mountain habitats. 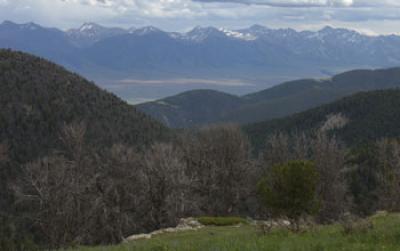 The Clark's Nutcracker, a mountain bird, can store up to 100,000 seeds in underground caches each year. Squirrels also store thousands of seeds underground.

A diminished number of seed cones has an effect on grizzly bears, the scientists say; the bears regularly raid squirrel seed caches to prepare for winter hibernation.

"In the past, low years for whitebark pine cones have led to six times more conflicts between grizzlies and humans, as hungry bears look for food in campgrounds," says Crone.

"Now, concerns about viability of whitebark pine populations are one of the main reasons grizzly bears in Yellowstone National Park are still listed as threatened under the Endangered Species Act."

Birds, squirrels and bears are not the only species that depend on whitebark pine.

Vast stands of whitebark pine help to maintain the mountain snowpacks that provide water to more than 30 million people in 16 U.S. states each year.

Whitebark pines are often the only trees at the highest elevations. Their branches retain snow as it blows across gusty mountaintops. Their shade moderates snow-melt in the spring, keeping flows down the mountain in check.

A small percentage of whitebark pine trees have outlived the ongoing destruction by pests and disease. These trees are the next area of focus for Crone's team.

"We want to find out whether the surviving trees are still producing cones," Crone says. "They represent the future of whitebark pines." 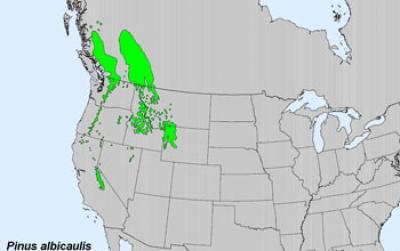 This is the current range of the whitebark pine tree: Will it soon be much smaller?