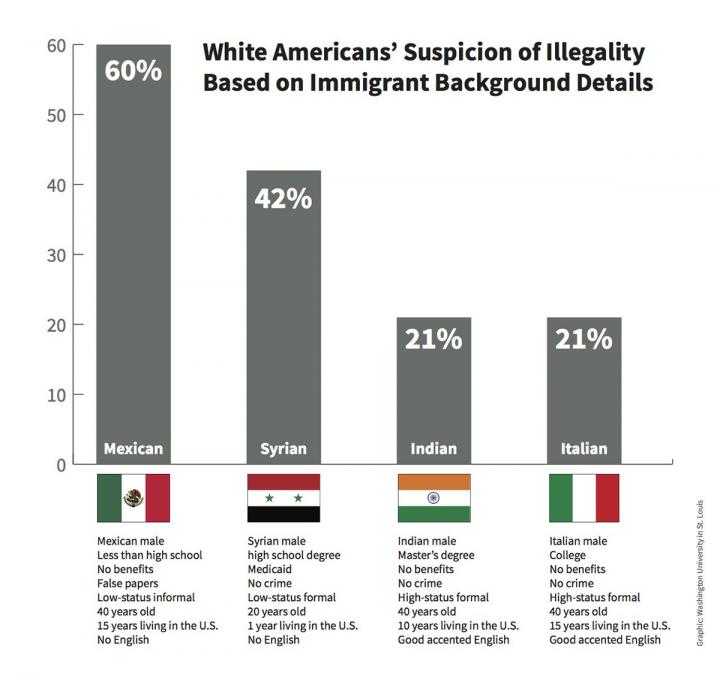 IMAGE: Bar chart shows percentage of White Americans who suspected an immigrant was illegal based on biographical details shown. (Source: Who are the "Illegals "? The Social Construction of Illegality in the...

In the eyes of many white Americans, just knowing an immigrant's national origin is enough to believe they are probably undocumented, said Ariela Schachter, study co-author and assistant professor of sociology in Arts & Sciences at Washington University in St. Louis.

"Our study demonstrates that the white American public has these shared, often factually incorrect, stereotypes about who undocumented immigrants are," Schachter said. "And this is dangerous because individuals who fit this 'profile' likely face additional poor treatment and discrimination because of suspicions of their illegality, regardless of their actual documentation."

Findings suggest that the mere perception of illegal status may be enough to place legal immigrants, and even U.S. citizens, at greater risk for discrimination in housing and hiring, for criminal profiling and arrest by law enforcement, and for public harassment and hate crimes in the communities they now call home.

"When people form impressions about who they think is 'illegal,' they often do not have access to individuals' actual documents. There have actually been a number of recent incidents in which legal immigrants and even U.S. born Americans are confronted by immigration authorities about their status. So these judgments seem to be based on social stereotypes. Our goal was to systematically uncover them," said study co-author René D. Flores, the Neubauer Family Assistant Professor of Sociology at the University of Chicago.

From a broader sociological perspective, Schachter and Flores argue that an immigrant's real standing in American society is shaped not just by legal documentation, but also by social perceptions.

"These findings reveal a new source of ethnic-based inequalities -- 'social illegality' -- that may potentially increase law enforcement scrutiny and influence the decisions of hiring managers, landlords, teachers and other members of the public," they conclude in the research.

Conducted in November 2017, the experimental survey asked a representative sample of 1,500 non-Hispanic white Americans to guess whether a hypothetical immigrant was in the country illegally -- and perhaps a threat worth reporting to authorities -- based on the reading of a brief biographical sketch.

By systematically varying the immigrant's nation of origin, education level, language skills, police record, gender, age, race and other variables, researchers created a pool of nearly 7 million unique immigrant sketches that touched on a range of stereotypes. Each respondent was randomly assigned to view 10 of these unique sketches during the survey.

Using complex statistical analysis, researchers estimated how much each of these individual immigrant traits and stereotypes influenced the assumptions of white Americans from various demographic backgrounds, geographic regions and self-identified political affiliations.

Surprisingly, the study found that white Republicans and white Democrats jump to many of the same conclusions about the legal status of hypothetical immigrants -- except when it comes to the receipt of government benefits.

Democrats rightfully recognize that in order to receive government benefits, immigrants must have legal documentation, whereas Republicans are more likely to suspect that receiving benefits marks an immigrant as illegal, even though by law undocumented immigrants are blocked from receiving federal benefits such as welfare.

Most tellingly, even the slightest hint of an immigrant with a criminal background has a huge effect on whether a white American suspects that the immigrant is in the country illegally.

"Saying an immigrant committed a crime had a larger impact on suspicions of illegality than saying they were, say, Mexican," Schachter said. "This is true for both white Democrats and white Republicans. There's a clear implication that the Trump administration's rhetoric on immigrant criminality is driving these beliefs, which, again, are not based in reality. In fact, other research finds that undocumented immigrants are less likely to commit crimes than native-born Americans."

The study also demonstrates significant differences in how immigrants from various countries and differing social statuses are likely to be treated in the United States.