When foams collapse (and when they don't) 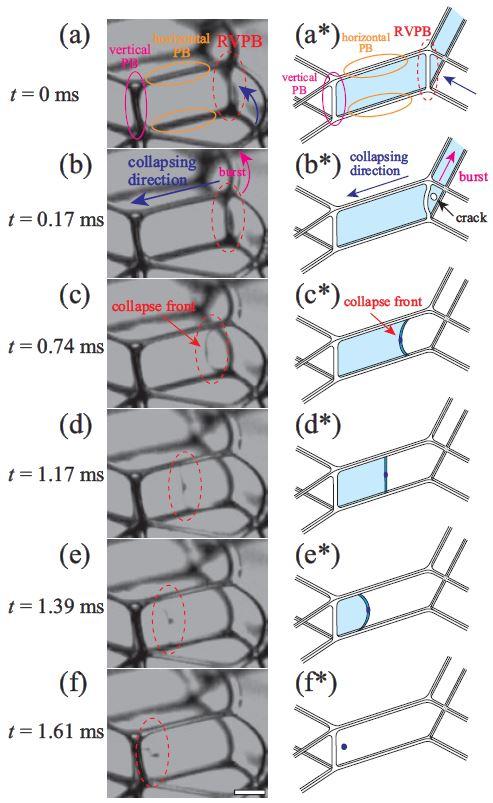 IMAGE: An initial crack in a film creates a RVPB (a). A second crack event in the film (b) causes a "collapse front " to be formed which sweeps up the RVPB...

Tokyo, Japan - Researchers from Tokyo Metropolitan University have revealed how liquid foams collapse by observing individual collapse "events" with high-speed video microscopy. They found that cracks in films led to a receding liquid front which sweeps up the original film border, inverts its shape, and releases a droplet which hits and breaks other films. Their observations and physical model provide key insights into how to make foams more or less resistant to collapse.

Understanding how foams collapse is serious business. Whether it's ensuring fire extinguishing foams stay long enough to put out flames, cleaning up toxic foams in seas and rivers, or simply getting the perfect rise on a cake, getting to grips with how foam materials collapse is vital to tailoring their properties, both to keep foams around longer or help them disappear quicker.

That's why a team led by Prof. Rei Kurita of Tokyo Metropolitan University have been carrying out high-speed video microscopy experiments on liquid foams. By generating foams sandwiched between two thin, transparent plates, they have direct access to the whole range of complex phenomena that occur when they begin to collapse. In previous work, they showed that a key way in which foams collapse is via the generation of droplets when individual films rupture. These droplets fly off at high speeds and break other surrounding films, leading to a cascade of breakages that cause the foam to break down. Yet, it was not yet known how exactly the droplets were formed. Importantly, it was not clear when droplets were formed, and when they weren't.

Now, the team has begun to unravel the complex mechanism behind how these droplets are made. When an initial crack forms in a film, the film recedes and leaves a wobbling line of liquid where the original film border was, named as the Released Vertical Plateau Border (RVPB). While it wobbles, there is an accumulation of liquid in the center of the RVPB. When a further crack is created in the remaining film, a receding line of liquid is created which sweeps up the RVPB (see Figure). Interestingly, videos showed that this front has a tendency to invert in shape as it travels. The team found that this is largely due to an inertial effect, as the heavier central part moves less under a constant force. Importantly, it is this inversion that ultimately causes a droplet to be released, initiating a cascade of film breakage events. Their work stands in contrast to previous investigations that looked at standing individual films; the accumulation of liquid in the middle of RVPBs is only possible inside foams, where liquid can be supplied by surrounding films and borders. The physical model they developed to describe the dynamics was shown to give reliable predictions of front velocity and relevant time scales.

Finally, the team replaced lab reagents with a household detergent and repeated the experiment, creating a much more long-lasting foam. When a bubble is burst at the side, they found a similar accumulation of liquid in the center of RVPBs, though significantly less than before. The enhanced elasticity of the film also meant it was extremely unlikely for two cracks to form in the same film; that meant no droplets were formed i.e. no collective bubble collapse: in light of the mechanism found above, this shows conclusively that both less transport within RVPBs and fewer cracks contributed directly to foam stability. Insights like these are vital for guiding the design of new foam materials with enhanced properties; the team hopes that their work may inspire state-of-the-art insulation materials, detergents, food products and cosmetics.