Bodies of water are "sinks", and thereby bind contaminants particularly well. If even slightly toxic concentrations in water are to be detected, the growth and swimming behavior of small crustaceans, mini-snails and copepods should be used for ecotoxicological assessments. This was the conclusion of a scientist from the TUM, who carried out a number of studies on the subject in cooperation with the University of California in Davis. She also confirmed that it is more informative to test several substances in parallel on various aquatic species, rather than only carrying out individual toxicity tests.

If a small crustacean does not grow properly, this can affect its reproduction. And if it is no longer able to move normally, it cannot flee from predators or from changing temperatures, which eventually has a fatal outcome. In scientific research, these effects are referred to as "sublethal effects". However, worldwide standard methods of pesticide analysis and the risk assessments associated with them only consider the lethal (deadly) effects. For the first time, three studies published in "Ecotoxicology", "Environmental Science and Pollution Research" and "Environmental Toxicology and Chemistry" demonstrate the sublethal effects on swimming behavior and growth, caused by widely used pesticides on the animals being studied. Moreover, the results indicate that the substances influence the underwater world for weeks, even if they are no longer detectable using standard methods. 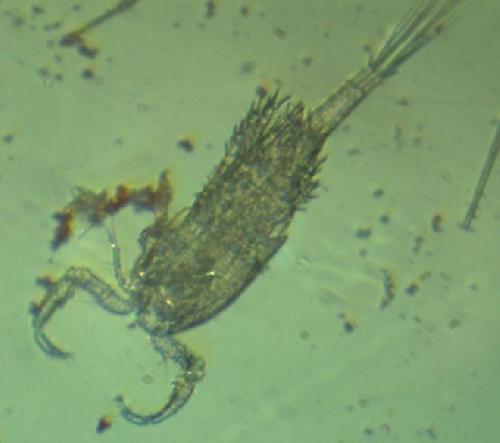 The scientists observed several species in the contaminated water body, including the less standard species for these tests, such as mini-snails and copepods. Credit: (Photo: Hasenbein)

Another factor is the mix of pesticides: "We looked at the insecticides not individually, but as a mixture, in order to investigate their interaction with one another", explains lead author Dr. Simone Hasenbein. "In addition, we observed several species in the contaminated water body, including the less standard species for these tests, such as mini-snails and copepods."

The tests took place over a period of ten days in the laboratory and also for six months in the field. Eventually, significantly negative effects resulting from the combined pesticide pollution in the water were found for twelve of the 15 small invertebrates and ten of the 16 zooplankton species. "Another point that was considered was how long the insecticide remained detectable in water", was Dr. Hasenbein's explanation of the method - "thus, one of the three substances was still detectable after six weeks."

A clear result delivered by a combination of study series

- Firstly, the laboratory tests provided an indication of the concentrations at which the contaminants influence the growth and swimming behavior of the organisms.

- The field studies proved the long-term effects on an entire ecosystem, its food web and its community structures.

The negative effects on aquatic ecosystems could only be pinned down once all the results were combined. Since the microorganisms being studied can be influenced by the pesticides for much longer than these substances remain detectable, this also leads to the conclusion that bodies of water are far more polluted than all previous research had demonstrated.

The changes in the animals which are detectable from their swimming behavior, growth or weight, and which eventually lead to their death (sublethal), are an important indicator of this. To date, however, there is no valid scale showing the point from which, for example, a delay in growth has a fatal outcome for the animal. Therefore, study author Dr. Hasenbein is advocating this approach in particular: "Sublethal endpoints need to be integrated into the methods used in ambient water monitoring, to allow long-term negative effects on aquatic ecosystems to be detectedreliably, even when the pesticide concentrations in the water are low", says the scientist. "A crustacean population which is exposed to low-level contaminant pollution could be more susceptible to invasive species, changes in water temperature or different salt concentrations, because the permanent, low-level pesticide contamination increases stress on the animals." This is an important aspect, especially in the light of climate change, and should therefore be taken into consideration in future ecotoxicologic assessments.