Water is detected in a planet outside our solar system

Water has been detected in the atmosphere of a planet outside our solar system with a new technique that could help researchers to learn how many planets with water, like Earth, exist throughout the universe. The team of scientists that made the discovery includes astronomers at Penn State University and other institutions. The astronomers detected the water in the atmosphere of a planet as massive as Jupiter that is orbiting the nearby star tau Boötis. The discovery is described in a scientific paper published in the 24 February 2014 online version of The Astrophysical Journal Letters.

Chad Bender, a research associate in the Penn State Department of Astronomy and Astrophysics and a co-author of the paper, said "Planets like tau Boötes b, which are as massive as Jupiter but much hotter, do not exist in our solar system. Our detection of water in the atmosphere of tau Boötes b is important because it helps us understand how these exotic hot-Jupiter planets form and evolve. It also demonstrates the effectiveness of our new technique, which detects the infrared radiation in the atmospheres of these planets."

Scientists previously had detected water vapor on a handful of other planets, using a technique that works only if a planet has an orbit that passes it in front of its star, when viewed from Earth. Scientists also were able to use another imaging technique that works only if the planet is sufficiently far away from its host star. However, significant portions of the population of extrasolar planets do not fit either of these criteria, and there had not been a way to discover information about the atmospheres of these planets. 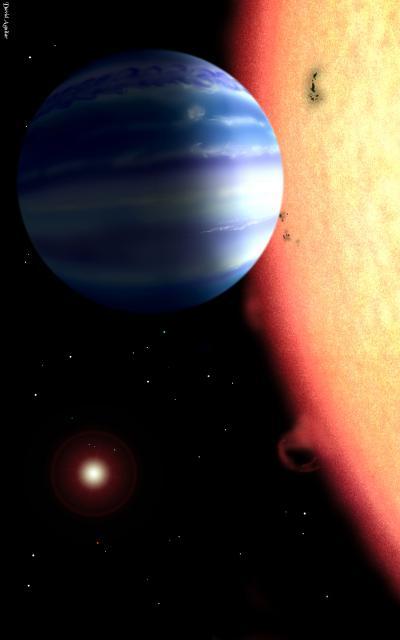 This artist's conception shows a hot-Jupiter extrasolar planet orbiting a star similar to the nearby star tau Boötes, where water has been detected in the atmosphere of an orbiting planet. The detection was made possible with a new technique that could help researchers to learn how many planets with water, like Earth, exist throughout the universe. The team of scientists that made the discovery includes astronomers at Penn State University, Caltech, and other institutions.

"We now are applying our effective new infrared technique to several other non-transiting planets orbiting stars near the Sun," Bender said. "These planets are much closer to us than the nearest transiting planets, but largely have been ignored by astronomers because directly measuring their atmospheres with previously existing techniques was difficult or impossible." With the new detection technique and more-powerful future telescopes such as the James Webb Space Telescope and the Thirty Meter Telescope, the astronomers expect to be able to examine the atmospheres of planets that are much cooler and more distant from their host stars, where liquid water is even more likely to exist.

Bender is leading a larger project to characterize the atmospheres of many hot-Jupiter extrasolar planets. The tau Boötis discovery is one subcomponent of this larger project. The data analysis and publication of the tau Boötis discovery was led by Alexandra Lockwood at Caltech as part of her thesis with her advisor Geoffrey Blake, Professor of Cosmochemistry and Planetary Sciences and Professor of Chemistry at Caltech, and much of the initial data reduction for this discovery was carried out by Alexander Richert, a Penn State graduate student. 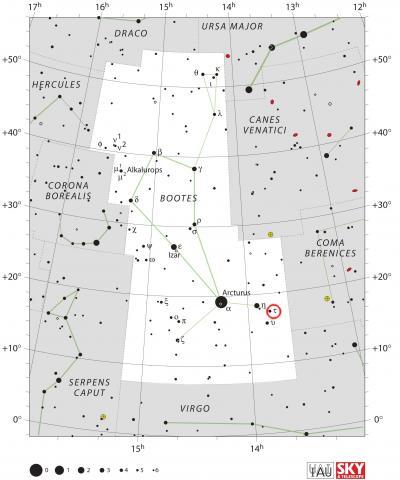 Water has been detected in the atmosphere of a planet outside our solar system with a new technique that could help researchers to learn how many planets with water, like Earth, exist throughout the universe. The planet is orbiting the near-by star nearby star tau Boötes. This map shows the constellation Boötes. The exoplanet tau Boötes b orbits the star tau Boötes, which is indicated by the red circle.