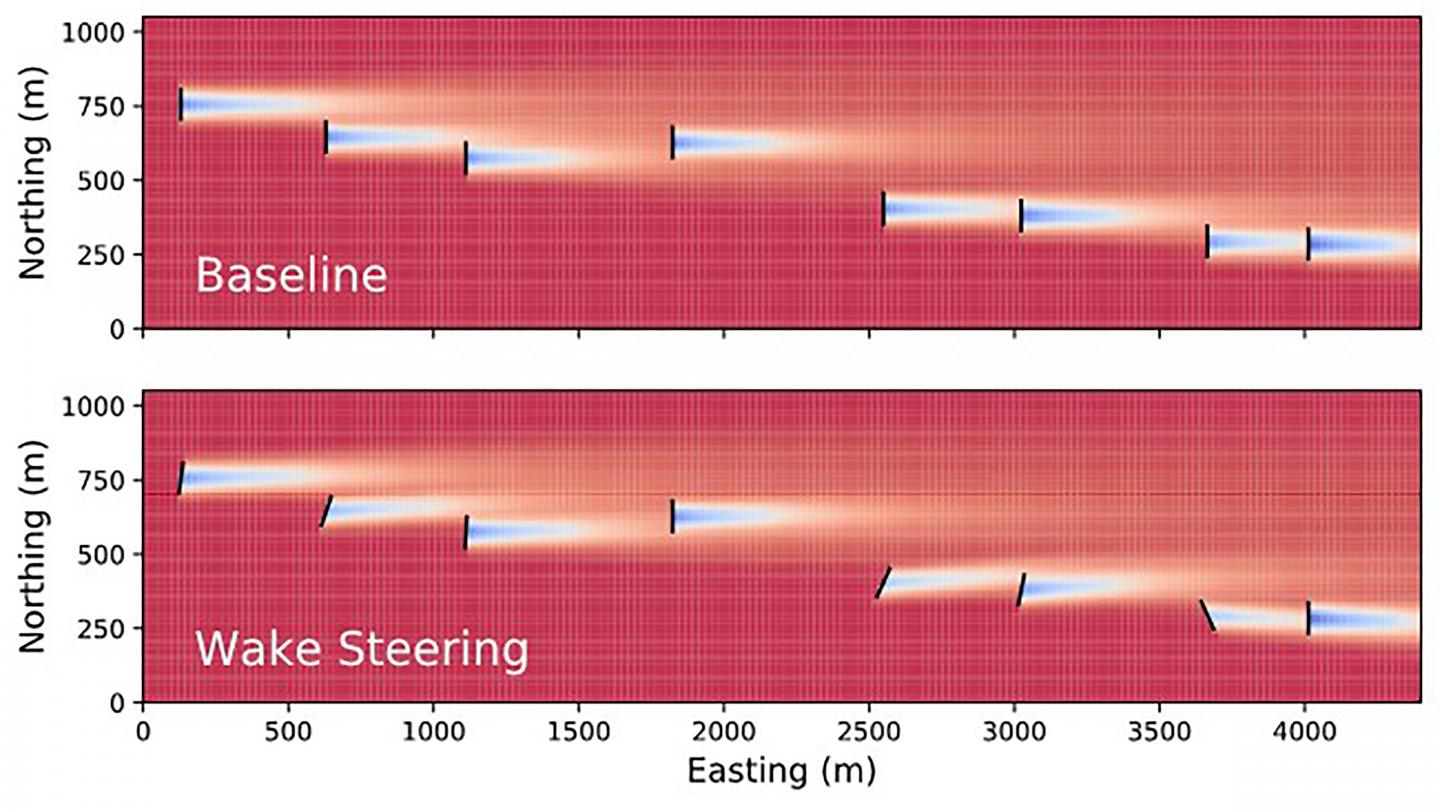 IMAGE: Illustration of wake steering for an example wind plant. Wind turbines are misaligned with the wind to redirect their wakes away from downstream turbines. Blue regions indicate lower wind speeds...

WASHINGTON, May 18, 2021 -- Wake steering is a strategy employed at wind power plants involving misaligning upstream turbines with the wind direction to deflect wakes away from downstream turbines, which consequently increases the net production of wind power at a plant.

While some plants showed less potential for wake steering due to unfavorable meteorological conditions or turbine layout, several wind power plants were ideal candidates that could benefit greatly from wake steering control.

Overall, a predicted average annual production gain of 0.8% was found for the set of wind plants investigated. In addition, the researchers found that on wind plants using wake steering, wind turbines could be placed more closely together, increasing the amount of power produced in a given area by nearly 70% while maintaining the same cost of energy generation.

"We were surprised to see that that there was still a large amount of variability in the potential energy improvement from wake steering, even after accounting for the wake losses of different wind plants," said author David Bensason.

Just as umbrellas may cast a shadow, wind turbines create a region of slower, more turbulent air flow downstream of their rotor, which is known as a wake. When these wakes flow into another turbine, they reduce its power production capacity.

The wake steering strategy "steers" these wakes away from turbines by offsetting the angle between the rotor face and the incoming wind direction. This technique sacrifices the power efficiencies of a few turbines in order to increase the performance of the wind power plant as a whole. Wake steering can only increase energy production if there are wake losses to start. Consequently, the benefits of wake steering tend to increase for wind plants with higher wake losses.

The study is one of the first to use the Gauss-Curl-Hybrid wake model, which NREL developed. This model predicts wake behavior in a wind plant more accurately than prior models and captures effects that are more prominent in large-scale plants. The researchers also combined several publicly available databases and tools that together make the investigation of wake steering potential for a large sample of U.S. wind plants possible.

"We hope that this study, which highlighted the potential for wake steering for a large sample of existing commercial wind plants in the U.S., motivates wind plant owners to implement wake steering in their wind plants to increase energy production and contribute to making wind energy a widely deployed affordable clean energy source," said co-author Eric Simley.