Volcano location could be greenhouse-icehouse key

HOUSTON -- (Feb. 6, 2013) -- A new Rice University-led study finds the real estate mantra "location, location, location" may also explain one of Earth's enduring climate mysteries. The study suggests that Earth's repeated flip-flopping between greenhouse and icehouse states over the past 500 million years may have been driven by the episodic flare-up of volcanoes at key locations where enormous amounts of carbon dioxide are poised for release into the atmosphere.

"We found that Earth's continents serve as enormous 'carbonate capacitors,'" said Rice's Cin-Ty Lee, the lead author of the study in this month's GeoSphere. "Continents store massive amounts of carbon dioxide in sedimentary carbonates like limestone and marble, and it appears that these reservoirs are tapped from time to time by volcanoes, which release large amounts of carbon dioxide into the atmosphere."

Lee said as much as 44 percent of carbonates by weight is carbon dioxide. Under most circumstances that carbon stays locked inside Earth's rigid continental crust.

"One process that can release carbon dioxide from these carbonates is interaction with magma," he said. "But that rarely happens on Earth today because most volcanoes are located on island arcs, tectonic plate boundaries that don't contain continental crust."

Earth's climate continually cycles between greenhouse and icehouse states, which each last on timescales of 10 million to 100 million years. Icehouse states -- like the one Earth has been in for the past 50 million years -- are marked by ice at the poles and periods of glacial activity. By contrast, the warmer greenhouse states are marked by increased carbon dioxide in the atmosphere and by an ice-free surface, even at the poles. The last greenhouse period lasted about 50 million to 70 million years and spanned the late Cretaceous, when dinosaurs roamed, and the early Paleogene, when mammals began to diversify.

Lee and colleagues found that the planet's greenhouse-icehouse oscillations are a natural consequence of plate tectonics. The research showed that tectonic activity drives an episodic flare-up of volcanoes along continental arcs, particularly during periods when oceans are forming and continents are breaking apart. The continental arc volcanoes that arise during these periods are located on the edges of continents, and the magma that rises through the volcanoes releases enormous quantities of carbon dioxide as it passes through layers of carbonates in the continental crust. 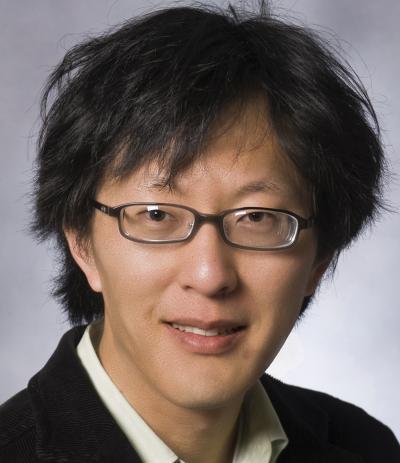 Lee, professor of Earth science at Rice, led the four-year study, which was co-authored by three Rice faculty members and additional colleagues at the University of Tokyo, the University of British Columbia, the California Institute of Technology, Texas A&M University and Pomona College.

Lee said the study breaks with conventional theories about greenhouse and icehouse periods.

"The standard view of the greenhouse state is that you draw carbon dioxide from the deep Earth interior by a combination of more activity along the mid-ocean ridges -- where tectonic plates spread -- and massive breakouts of lava called 'large igneous provinces,'" Lee said. "Though both of these would produce more carbon dioxide, it is not clear if these processes alone could sustain the atmospheric carbon dioxide that we find in the fossil record during past greenhouses."

Lee is a petrologist and geochemist whose research interests include the formation and evolution of continents as well as the connections between deep Earth and its oceans and atmosphere..

Lee said the conclusions in the study developed over several years, but the initial idea of the research dates to an informal chalkboard-only seminar at Rice in 2008. The talk was given by Rice oceanographer and study co-author Jerry Dickens, a paleoclimate expert; Lee and Rice geodynamicist Adrian Lenardic, another co-author, were in the audience.

"Jerry was talking about seawater in the Cretaceous, and he mentioned that 93.5 million years ago there was a mass extinction of deepwater organisms that coincided with a global marine anoxic event -- that is, the deep oceans became starved of oxygen," Lee said. "Jerry was talking about the impact of anoxic conditions on the biogeochemical cycles of trace metals in the ocean, but I don't remember much else that he said that day because it had dawned on me that 93 million years ago was a very interesting time for North America. There was a huge flare-up of volcanism along the western margin of North America, and the peak of all this activity was 93 million years ago.

"I thought, 'Wow!'" Lee recalled. "I know coincidence doesn't mean causality, but it certainly got me thinking. I decided to look at whether the flare-up in volcanic activity that helped create the Sierra Nevada Mountains may also have affected Earth's climate."

Tectonic and petrological evidence indicated that many Etna-like volcanoes existed during the Cretaceous greenhouse, Lee said. He and colleagues traced the likely areas of occurrence by looking for tungsten-rich minerals like scheelite, which are formed on the margins of volcanic magma chambers when magma reacts with carbonates. It wasn't easy; Lee spent an entire year pouring through World War II mining surveys from the western U.S. and Canada, for example.

"There is evidence to support our idea, both in the geological record and in geophysical models, the latter of which show plausibility," he said. For example, in a companion paper published last year in G-Cubed, Lenardic used numerical models that showed the opening and breakup of continents could change the nature of subduction zones, generating oscillations between continental- and island-arc dominated states.

Though the idea in the GeoSpheres study is still a theory, Lee said, it has some advantages over more established theories because it can explain how the same basic set of geophysical conditions could produce and sustain a greenhouse or an icehouse for many millions of years.

"The length of subduction zones and the number of arc volcanoes globally don't have to change," Lee said. "But the nature of the arcs themselves, whether they are continental or oceanic, does change. It is in the continental-arc stage that CO2 is released from an ever-growing reservoir of carbonates within the continents." 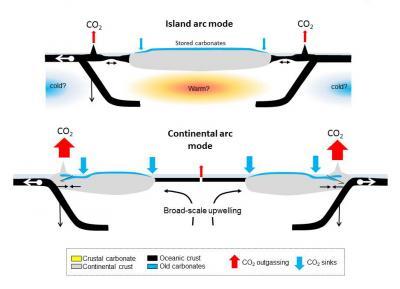 This diagram illustrates how fluctuations between continental-arc states and island-arc states could lead to episodic deposition and purging of carbon dioxide in Earth's continental crust.