Virus grows tube to insert DNA during infection then sheds it

WEST LAFAYETTE, Ind. — Researchers have discovered a tube-shaped structure that forms temporarily in a certain type of virus to deliver its DNA during the infection process and then dissolves after its job is completed.

The researchers discovered the mechanism in the phiX174 virus, which attacks E. coli bacteria. The virus, called a bacteriophage because it infects bacteria, is in a class of viruses that do not contain an obvious tail section for the transfer of its DNA into host cells.

"But, lo and behold, it appears to make its own tail," said Michael Rossmann, Purdue University's Hanley Distinguished Professor of Biological Sciences. "It doesn't carry its tail around with it, but when it is about to infect the host it makes a tail."

Researchers were surprised to discover the short-lived tail.

"This structure was completely unexpected," said Bentley A. Fane, a professor in the BIO5 Institute at the University of Arizona. "No one had seen it before because it quickly emerges and then disappears afterward, so it's very ephemeral."

Although this behavior had not been seen before, another phage called T7 has a short tail that becomes longer when it is time to infect the host, said Purdue postdoctoral research associate Lei Sun, lead author of a research paper to appear in the journal Nature on Dec. 15.

Researchers at the BIO5 institute mutated the virus so that it could not form the tube. The mutated viruses were unable to infect host cells, Fane said.

The virus's outer shell, or capsid, is made of four proteins, labeled H, J, F and G. The structures of all but the H protein had been determined previously. The new findings show that the H protein assembles into a tube-shaped structure. The E. coli cells have a double membrane, and the researchers discovered that the two ends of the virus's H-protein tube attach to the host cell's inner and outer membranes.

Images created with a technique called cryoelectron tomography show this attachment. The H-protein tube was shown to consist of 10 "alpha-helical" molecules coiled around each other. Findings also showed that the inside of the tube contains a lining of amino acids that could be ideal for the transfer of DNA into the host.

"This may be a general property found in viral-DNA conduits and could be critical for efficient genome translocation into the host," Rossmann said.

Like many other viruses, the shape of the phiX174 capsid has icosahedral symmetry, a roughly spherical shape containing 20 triangular faces. 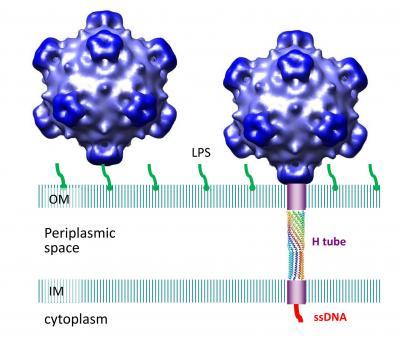 Researchers have discovered a tube-shaped structure that forms temporarily in a certain type of virus to deliver its DNA during the infection process and then dissolves after its job is completed. The virus is pictured here infecting an E. coli cell. The tube attaches to the cell's inner and outer membranes, bridging the "periplasmic space" in between.A publication-quality graphic is available at http://www.purdue.edu/uns/images/2013/rossmann-tail.jpg.