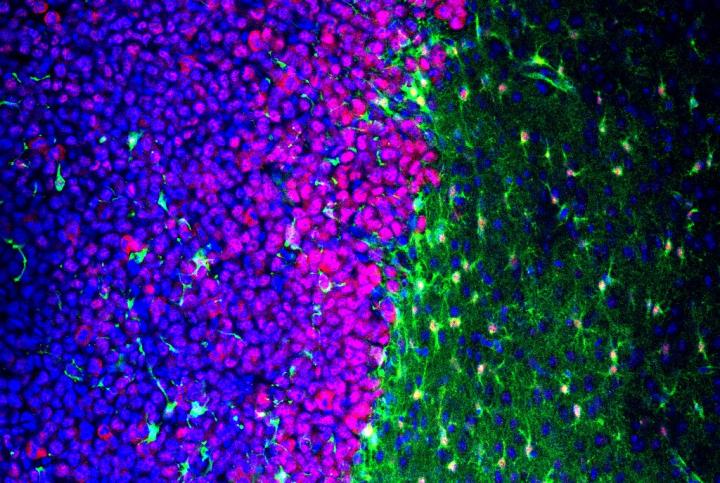 When the brain gets injured, star-shaped brain cells called astrocytes come to the rescue. In the case of glioma - the most common type of primary brain tumor - this protective action comes at a price.

A new study published in Neurochemistry International reveals that gliomas alter astrocyte function, which normally prevents the brain from being flooded with excess excitatory chemicals. This could contribute to the seizures experienced by many brain cancer patients.

"Seizures are a serious and debilitating comorbidity that affect most patients with primary brain tumors. Unfortunately, epilepsy dramatically reduces quality of life, and our current anti-epileptic drugs are not effective for all patients," said Stefanie Robel, an assistant professor at the Fralin Biomedical Research Institute at VTC and the study's co-senior author.

"My lab is looking for other cellular and molecular targets that contribute to seizures resulting from gliomas, and so far, what we're finding is that the scar-forming astrocytes that surround the tumor play an important role."

Gliomas are competitive, fast-growing tumors that - just like all other living cells - need an energy source to survive. Composed primarily of glia cells, gliomas take over the brain's microvasculature, syphoning off a fresh supply of nutrients from other healthy cells. The tumors also release toxic levels of glutamate, an excitatory neurotransmitter, which can kill off the brain's densely packed healthy neurons, making space for the cancer to grow. An abundance of glutamate can also cause more neurons to become electrically active, which can result in seizures.

Astrocytes swiftly scar the tumor to protect the brain from further damage - but this comes at a price.

"Under ordinary circumstances, you'd expect astrocytes to buffer any additional glutamate. Part of their job is to maintain balanced, homeostatic conditions for neurons by removing excess glutamate and potassium," said Robel, who is also an assistant professor in Virginia Tech's School of Neuroscience and the Virginia Tech Carilion School of Medicine. "Like micro vacuum cleaners, they tidy up neurotransmitters and ions floating amid brain cells."

But the astrocytes encasing gliomas exhibited different molecular signatures based on their proximity to the cancer. The cells directly touching the tumor were elongated and swollen, mimicking the response to other brain injuries associated with epilepsy, such as stroke or physical trauma.

Electrophysiology and staining experiments revealed the stretched cells also lacked proper localization or function of proteins needed to carry potassium and glutamate inside an astrocyte. The cells had also lost a vital enzymatic process that converts glutamate into glutamine, a molecule that neurons use to suppress activity.

Under these conditions, the brain's delicate balance of excitation and inhibition tips, and problems arise.

Toxic levels of glutamate emitted from the tumor, exacerbated by the astrocytes dysfunctional state, destroy healthy neurons. Previous studies led by Sontheimer showed that the fluid suspended between brain cells reaches harmful levels of excitability - enough to spark a seizure. After the first seizure, the circuits involved are preferentially strengthened, making future episodes even more likely.

"A tumor is a dynamic, living tissue that sends and receives chemical signals to surrounding glial cells and neurons, influencing their behavior," Robel said. "What we're seeing is that these very fine changes in astrocyte function and morphology in glioma response could have a very big impact for the patient."

As more research about astrocytic response to injury, disease, and cancer is published, Robel hopes that larger patterns will emerge.

"If we can understand what astrocytes do in the context of glioma, brain trauma, or even autism, maybe these overarching biological patterns will help us identify new diagnostics, therapies, and treatments to help patients suffering from a wide range of diseases," Robel said.