Viewing deeper into the quantum world

One of the important tasks for quantum physics researchers and engineers is designing more sensitive instruments to study the tiny fields and forces that govern the world we live in. The most precise measuring instruments devised to date, such as atomic clocks or gravitational wave detectors, are interferometric in nature and operate according to the laws of quantum mechanics.

As with all quantum objects, photons – the basic building blocks of light - display a "wave-particle" duality. Interferometers exploit the wave-like behaviour of photons to measure a signal, known as a phase shift, affected by tiny forces acting on the interferometer. However, the particle-like behaviour of the same photons introduces noise into the measurement, reducing the quality of the results and limiting the sensitivity of these instruments.

This limitation is an expression of Heisenberg's famous Uncertainty Principle, which, in this context, states that the more precisely we know the phase of an interferometer signal, the less precisely we know the number of particles that are being measured, and vice versa. The standard approach for overcoming this sensitivity limit is to use quantum-entanglement among the photons, meaning that individual photons become correlated at the quantum level. The noise introduced by a quantum fluctuation associated with one photon can be cancelled by an equivalent and opposite fluctuation from another photon. 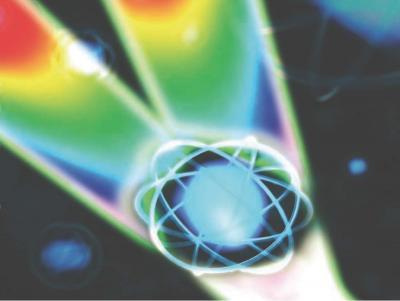 This is an artistic impression of the experiment.

In a pioneering experiment that took place three years ago, ICFO researchers led by ICREA Prof at ICFO Morgan Mitchell were able to experimentally demonstrate a proof-of-principle nonlinear interferometer that exploited interactions between photons to measure the tiny magnetization of a cloud of laser-cooled atoms. Now the same group has gone further with a new study, recently published in Physical Review X, which, for the first time, demonstrates that such a nonlinear interferometer can outperform an equivalent linear measurement, confirming the proposed theoretical predictions.

Robert Sewell, researcher in the group and first author of the article, explains that "this discovery is important because it demonstrates that a nonlinear quantum measurement can actually be better than a linear one. Moreover, we demonstrate this by measuring a quantity of real interest – a magnetic field. "

Morgan Mitchell comments "This is quantum physics in the age of social networks, blogging, and Wikipedia. A group of quantum particles acting together can tell us more about the world than the most perfect group of lonely, isolated particles. This will come as no surprise to a modern teenager, but until very recently it was considered impossible by most physicists. I can't wait to see how this will change our approach to detecting, for example, the magnetic fields of the brain."