Ventilation in buildings: where water sanitation was in the 1800s 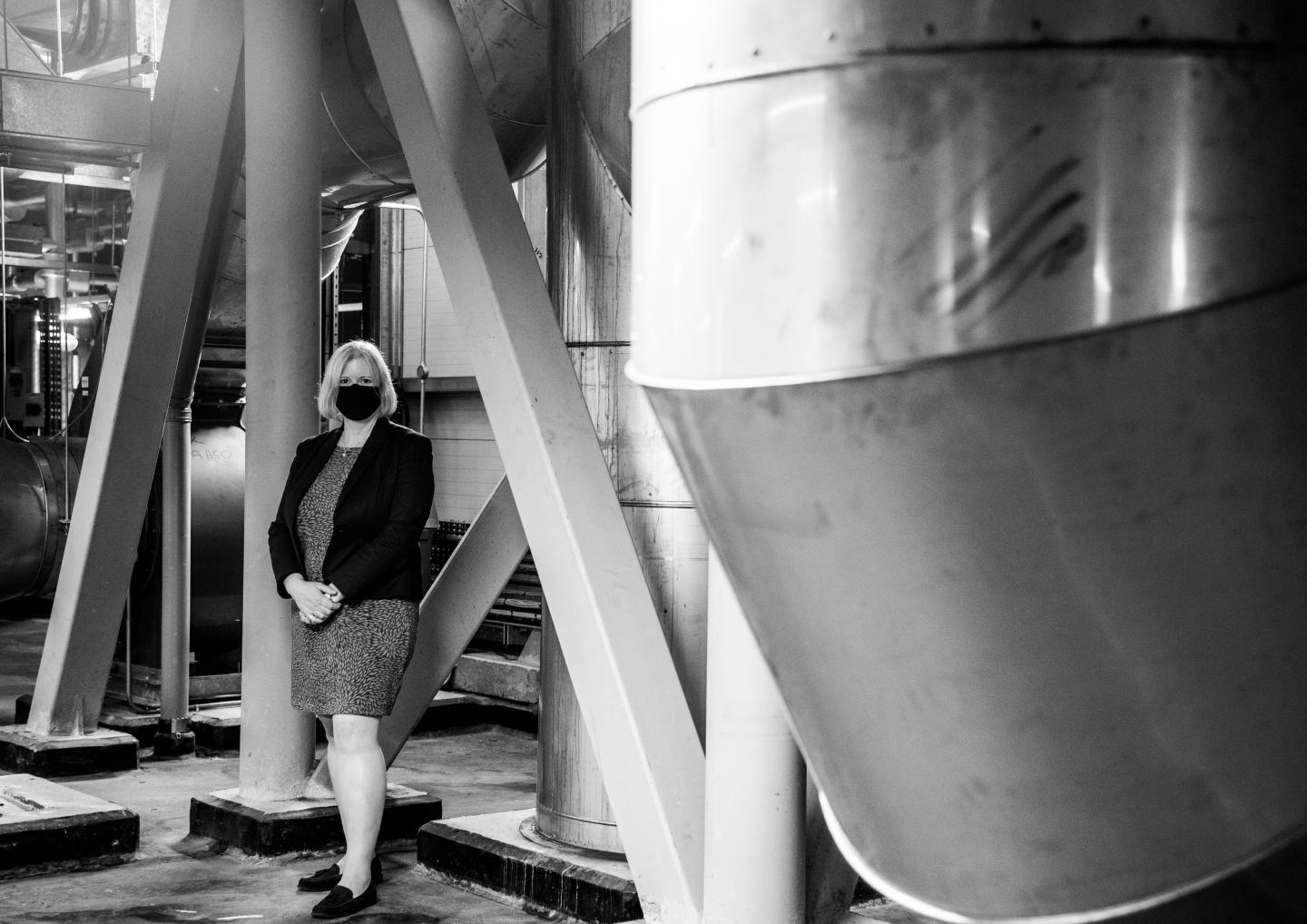 IMAGE: Professor Noakes stands by the side of the ducting in a ventilation system of a large building

A group of the world's leading experts in the transmission of airborne pathogens is calling for a tightened regulatory system to control air quality in buildings - as a way of reducing the spread of covid-19 and other illnesses.

Writing in the journal Science, the 40 scientists say: "A paradigm shift is needed on the scale that occurred when Chadwick's Sanitary Report in 1842 led the British government to encourage cities to organise clean water supplies and centralised sewage systems.

"In the 21st century we need to establish the foundations to ensure that the air in our buildings is clean with a significantly reduced pathogen count, contributing to the building occupants' health, just as we expect for the water coming out of our taps."

The scientists who have contributed to the analysis include Cath Noakes, Professor of Environmental Engineering for Buildings at the University of Leeds and a member of SAGE, the body that advises the UK Government on scientific emergencies.

Professor Noakes said: "Over the years, we have neglected the role that the air circulating inside a building plays in the way germs and viruses may spread between people. The pandemic has exposed that deficiency in our understanding and the way we seek to make buildings safer to use.

"We need to introduce new mechanisms that keep pathogen levels in the air flow in buildings and other enclosed spaces to a minimum. That approach can be achieved with technology backed-up with a requirement to meet new standards."

"Action to improve ventilation to reduce exposure to airborne pathogens will bring other benefits, including reducing exposure to other air pollutants and improved performance and wellbeing."

Historically, public health regulations have concentrated on sanitation, drinking water and food safety, whereas the risk from airborne pathogens whether it is flu or covid-19 is "... addressed fairly weakly, if at all, in terms of regulations, standards, and building design and operation, pertaining to the air we breathe", say the scientists.

But research during the covid-19 pandemic has underlined the role that aerosols play in spreading disease. When a person who has a respiratory infection speaks, coughs or sneezes, tiny infective particles are emitted from their nose and mouth. Indoors, those tiny particles are carried in the air and infect other people.

The paper says: "... community outbreaks for COVID-19 infection in particular most frequently occur at larger distances through inhalation of airborne virus-laden particles in indoor spaces shared with infected individuals.

"Such airborne transmission is potentially the dominant mode of transmission of numerous respiratory infections. We also have strong evidence on disease transmission, for example in restaurants, ships, and schools, suggesting that the way we design, operate, and maintain buildings influences transmission."

That risk of people becoming cross infected inside a building can be reduced through ventilation coupled with air disinfection and air filtration systems. However, the scientists note: "... almost no engineering-based measures to limit community respiratory infection transmission had been employed in public buildings - excluding health care facilities - or transport infrastructure anywhere in the world."

There are ventilation guidelines and standards which architects and builders must follow but the focus is on reducing odours and carbon dioxide levels and in maintaining thermal comfort. None provide recommendations on how to control the spread of pathogens.

The scientists are calling for World Health Organisation indoor air-quality guidelines, which cover pollutants such as carbon monoxide and other chemicals, to be extended to include airborne pathogens. The experts say individual governments need to introduce and enforce domestic regulations.

"None of this means that every indoor space should become a biosafety facility. It means that a building should be designed and operated according to its purpose and the activities conducted there, so that airborne infection risk is maintained below an acceptable level," the scientists write in the paper.

That would mean different standards for a gym where people may be breathing heavily as opposed to people relaxing in a cinema.

The lead author of the paper, Lidia Morawska, Distinguished Professor in the School of Earth and Atmospheric Sciences at Queensland University of Technology in Australia, said: "For decades, the focus of architects and building engineers was on thermal comfort, odour control, perceived air quality, initial investment cost, energy use, and other performance issues, while infection control was neglected."

Quotes from other authors of the paper

Trish Greenhalgh, Professor of Primary Care Health Sciences at the University of Oxford, said: " It's no exaggeration to call this a paradigm shift. Up to now, most of the efforts to prevent transmission of Covid-19 and other airborne respiratory diseases such as tuberculosis has focused on influencing individual behaviour such as mask-wearing, cough hygiene and handwashing. These measures are still important, but they will be relatively ineffective in the indoor environment until we ensure that the air we inhale contains far fewer particles that have been exhaled by others in the room.

"We need to re-think the practice, currently common in many countries, of keeping windows closed and recycling stale air in air-conditioning. Windows should be opened and draughty rooms welcomed; if air is recycled it must be filtered and disinfected; and monitoring air quality--for example using CO2 monitors--should become commonplace. In short, we need to re-think--and re-regulate--what counts as a 'healthy' building."

Stephanie Dancer, Professor of Microbiology at Edninburgh Napier University and Consultant Medical Microbiologist at NHS Lanarkshire, in Scotland, said: "Even just opening the windows provides more than a gesture towards reducing the risk of infection."

The scientists challenge the argument that costs of air quality control in buildings would be prohibitively expensive. They say the monthly cost of covid-19 is conservatively estimated at $1 trillion. Installing ventilation and air-quality systems designed to remove airborne pathogens would add about one percent to the construction costs of a typical building.

Improving air quality in buildings would bring benefits beyond reducing sickness levels due to respiratory infections. It is likely to reduce allergens and the number of people who experience 'sick building syndrome'.