One of the major problems in astronomy is measuring very large distances in the universe. The current most common methods measure relative distances, but now research from the Niels Bohr Institute demonstrates that precise distances can be measured using supermassive black holes. The results are published in the scientific journal, Nature.

The active galaxy NGC 4151 called the, 'Eye of Sauron' due to its similarity to the eye in the film Lord of the Rings, is a modest spiral galaxy. It has a supermassive black hole at its centre and this black hole is still active, that is to say it accretes gas clouds from its surroundings and it is this process that makes it possible to measure the distances to the galaxy.

"When the gas falls in towards the black hole, it is heated up and emits ultraviolet radiation. The ultraviolet radiation heats a ring of dust, which orbits the black hole at a large distance and this heats the dust causing it to emit infrared radiation. Using telescopes on Earth, we can now measure the time delay between the ultraviolet light from the black hole and the subsequent infrared radiation emitted from the dust cloud. The time difference is about 30 days and because we know the speed of light, we can calculate the real physical distance between the black hole and the encircling dust," explains Darach Watson, an associate professor at the Dark Cosmology Centre at the Niels Bohr Institute, University of Copenhagen. 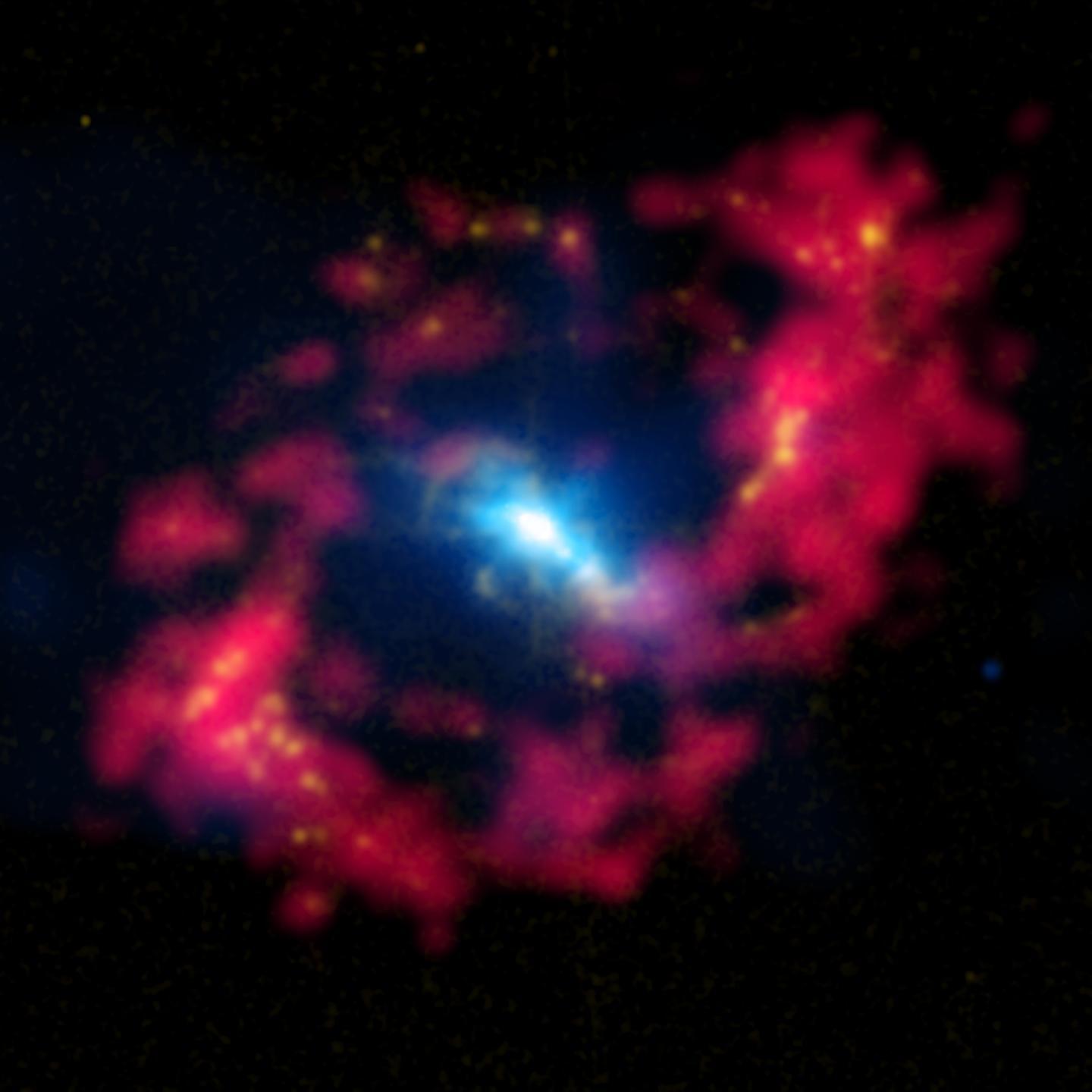 The Galaxy NGC 4151 is called the, "Eye of Sauron" due to its similarity to the eye in the film Lord of the Rings. The image shows the supermassive black hole, which is still active, that is to say that it engulfs gas and dust clouds from its surroundings. In this process, it emits ultraviolet radiation, which heats the ring-shaped dust cloud that orbits around the black hole at a distance and this causes the dust cloud to emit infrared radiation.

He explains that by combining the light from the two 10-meter Keck telescopes on Mauna Kea on Hawaii using a method called interferometry, they could achieve an effective resolution equivalent to a telescope with a perfect 85-meter diameter mirror (the distance between the two telescopes). This provides very high resolution - a hundred times better resolution than the Hubble Space Telescope - and allows them to measure the angle the dust ring makes in the sky, (about twelve millionth of a degree).

By now combining data about the angular size of the dust ring on the sky with the physical size of 30 light days, the distance from the Earth can be calculated by using simple geometri.

"We calculated the distance to be 62 million light-years. The previous calculations based on redshift (a change in the wavelength of the light due to the velocity of the object away from us) were between 13 million and 95 million light-years, so we have gone from a great deal of uncertainty to now being able to determine the precise distance. This is very significant for astronomical calculations of cosmic scale distances," says Darach Watson.

The research is primarily a collaboration between Darach Watson and Sebastian Hönig, who led the study and now works at the University of Southampton, but was then working at the Dark Cosmology Centre at the Niels Bohr Institute. Darach Watson says that they were both thrilled with the results.

"The process was almost magical. The most important thing about measuring distance is high precision - how accurate is the method. We knew that if we could get the uncertainty down to about 10 percent, it would be significant, but we had no idea that it was possible. When we first realised that we could carry out this measurement, we knew that the precision of the measurements of the anglular size using interferometry and the physical size based on the time delay were both only about 30 percent. Normally, when you combine two such numbers, the accuracy of the ratio is worse, so we expected an overall accuracy of 40 percent or so. But that was not what happened. It turned out that the greatest uncertainty in both measurements was the distribution of the brightness across the dust ring. And it was the same in both measurements, so when we took the ratio, the uncertainties cancelled - simply disappeared. Sebastian Hönig, after making the first calculation, came to me and said: "You'll never believe what the precision is, guess! Usually in science you fight so hard to get something to fit or work properly. But every so often - very rarely, something magical happens - it's like a gift and everything just falls into place. That is what happened here," explains Darach Watson. 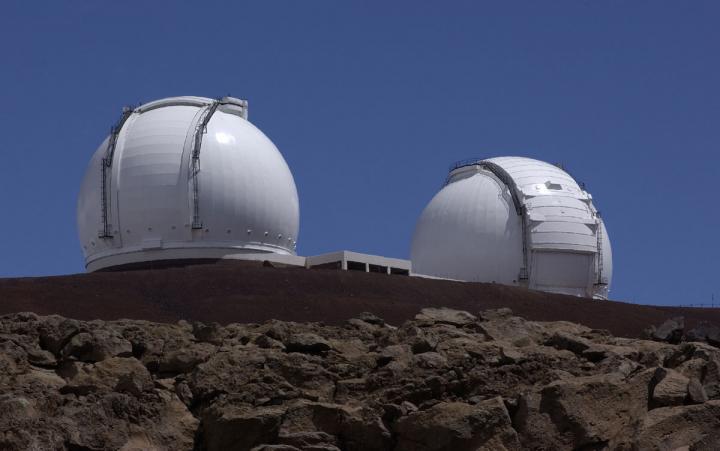 By combining the light from the two 10-meter Keck telescopes on Mauna Kea on Hawaii using a method called interferometry, they could achieve an effective resolution equivalent to a telescope with an 85-meter mirror (the distance between the two telescopes).

Getting an accurate distance to the black hole removes one of the greatest uncertainties in measuring it's mass.

"The calculations of the mass (weight) of the supermassive black holes at the heart of galaxies depends on two main factors: the rotational speed of the stars in the galaxy and how far it is from the black hole to the stars. The rotational speed can be observed and the distance from the black hole out to the rotating disc of stars can now be calculated precisely using the new method. Our calculations show that the supermassive black holes are 40 percent heavier than previously thought. This fundamentally changes determinations of the masses of black holes," explains Darach Watson.

In addition, the new accurate distance measurements could become the most precise way to measure the 'Hubble's constant', that is, the rate at which the universe is expanding and which ultimately determines the age of the universe. 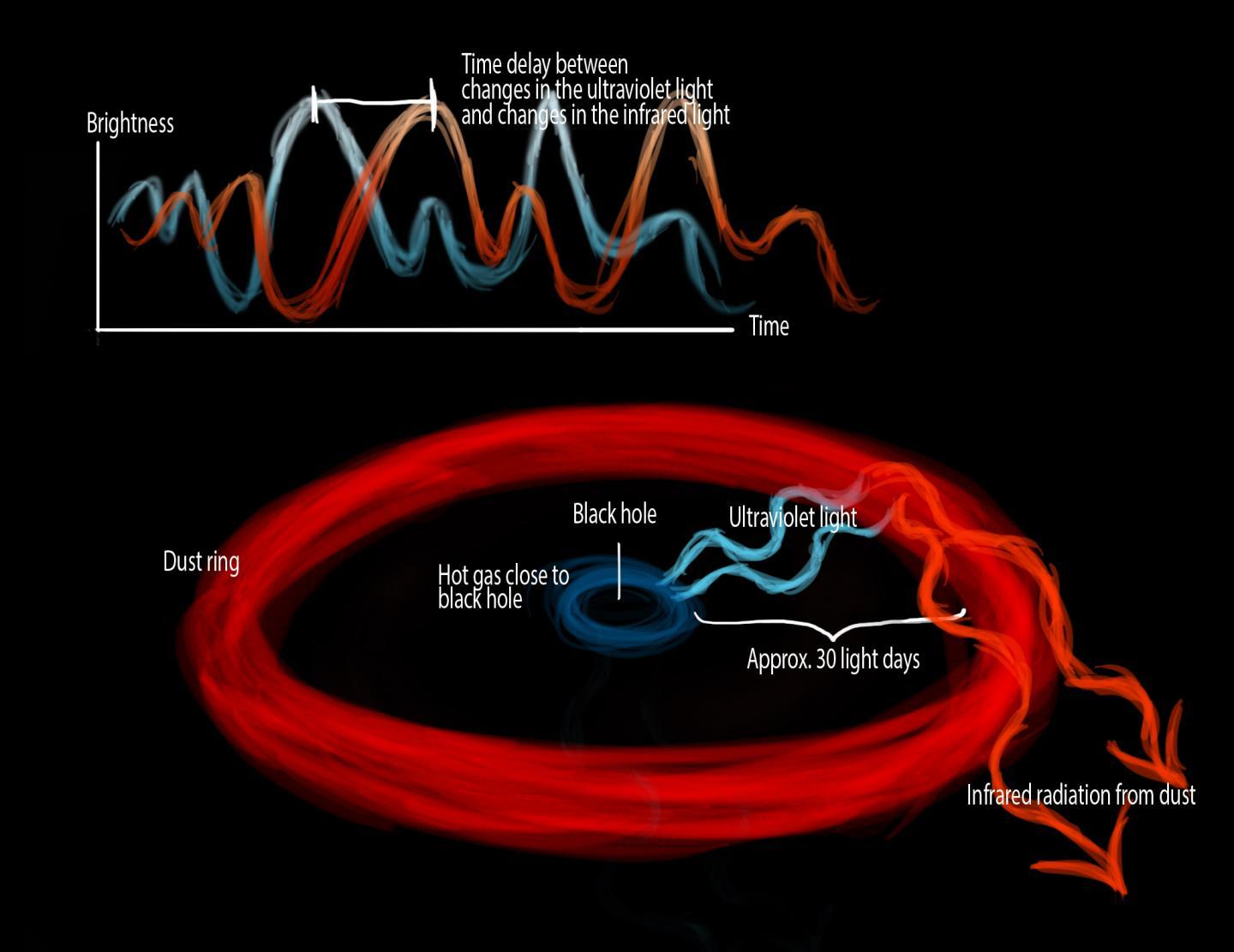