The US needs a national strategy for regulating farm pollution 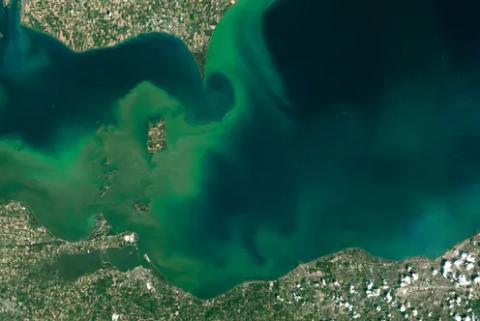 Midsummer is the time for forecasts of the size of this year’s “dead zones” and algal blooms in major lakes and bays. Will the Gulf of Mexico dead zone be the size of New Jersey, or only as big as Connecticut? Will Lake Erie’s bloom blossom to a human health crisis, or just devastate the coastal economy?

We are scientists who each have spent almost 50 years figuring out what causes dead zones and what it will take to resuscitate them and reduce risks of toxic blooms of algae. Researchers can forecast these phenomena quite well and have calculated the nitrogen and phosphorus pollution cuts needed to reduce them.

These targets are now written into formal government commitments to clean up Lake Erie, the Gulf and the Chesapeake Bay. Farmers and land owners nationwide received US$30 billion to support conservation, including practices designed to reduce water pollution, from 2005 to 2015, and are scheduled to receive $60 billion more between 2019 and 2028.

But these efforts have fallen short, mainly because controls on nutrient pollution from agriculture are weak and ineffective. In our view, there is no shortage of solutions to this problem. What’s needed is technological innovation and stronger political will.

State and federal agencies have known since the 1970s that overloading lakes and bays with nutrients generates huge blooms of algae. When the algae die and decompose, they deplete oxygen in the water, creating dead zones that can’t support aquatic life. But in each of these “big three” water bodies, efforts to curb nutrient pollution have been slow and halting.

But the scourges of low-oxygen waters and sometimes-toxic algae reappeared in the mid-1990s. This time, the source was mostly runoff from farm soils saturated with phosphorus from repeated applications of fertilizer and manure. Climate change made matters worse: Warmer waters hold less oxygen and cause faster growth of algae. 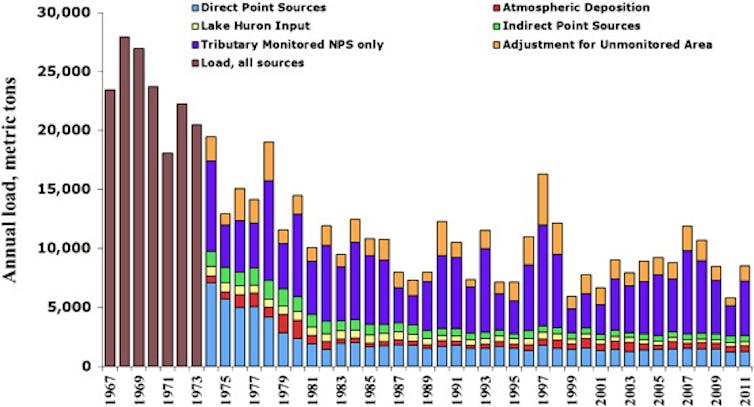 Slow progress in the Chesapeake Bay

Nitrogen and phosphorus reach the Chesapeake Bay from sources including wastewater treatment plants; air pollution emitters, such as factories and cars; and runoff from urban, suburban and agricultural lands. In 1987 the federal government and states around the bay agreed to reduce these flows by 40% by the year 2000 to restore water quality. But this effort relied on voluntary action and failed to make much progress.

In 2010 the states and the U.S. Environmental Protection Agency entered a legally binding commitment, to reduce pollutant loads below prescribed maximum levels needed to restore water quality. If the states make inadequate progress, the EPA can limit or rescind their permitting authority, and the states may lose federal funding.

But with the commitment’s 2025 deadline nearing, nitrogen loads have been reduced by less then 50% of the targeted amounts, phosphorus by less then 64%. Most of the remaining pollution comes from farm runoff and urban stormwater. Intensifying agriculture in rural areas and sprawl in urban areas are counteracting other cleanup efforts.

Cleaning up water bodies with large watersheds, like the Chesapeake Bay (64,000 square miles/165,000 square kilometers, involves many states and thousands of pollution sources.

Failure in the Gulf of Mexico

The Gulf of Mexico dead zone forms every year during the summer, fueled by nutrients washing down the Mississippi River from Midwest farms. It typically covers at least 6,000 square miles, sometimes expanding up to 9,000 square miles (23,000 square kilometers), and affects an area very rich in fisheries.

In 2001, the EPA and 12 Mississippi River basin states agreed to take action to reduce the Gulf dead zone by two-thirds by 2015. Researchers estimated that this would require reducing nitrogen loads reaching the Gulf by about 45%, mostly from the Corn Belt.

Now that deadline has been extended to 2035. Nitrogen and phosphorus loadings at the mouth of the Mississippi River haven’t budged in 30 years, so actions taken to date have failed to shrink the Gulf dead zone. 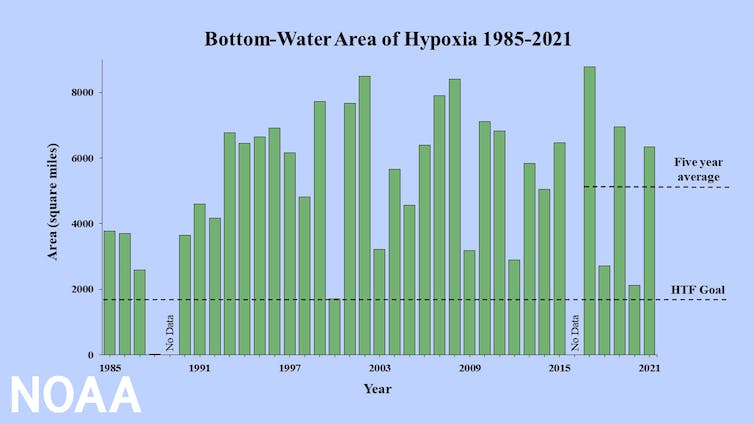 In 2020, the EPA and Ohio adopted an agreement similar to that for the Chesapeake to reduce phosphorus pollution below a prescribed maximum load from the Maumee River watershed at the western end of Lake Erie, where algal blooms occur most often. To date, Mississippi River basin states and even the EPA have opposed similarly mandating maximum pollution loads to reduce the Gulf of Mexico dead zone.

Despite substantial government subsidies to implement various agricultural management practices, nitrogen and phosphorus pollution in streams in Iowa and Illinois has actually increased over the 1980-1996 baseline of the Gulf agreement.

Even with increasing crop yields and more efficient use of fertilizer, the expansion and intensification of agriculture in the Midwest has overwhelmed any water quality gains. One driver is ethanol production, which has increased fortyfold since the Gulf action plan was adopted in 2001. Today, over 40% of corn grown in the U.S. is used for ethanol, mostly in the Midwest, while most of the rest is used to feed animals.

In all three regions, the growth of large-scale livestock farms – hogs in the Midwest, poultry around the Chesapeake Bay – is also contributing to nutrient pollution. Improper management of animal waste adds to nitrogen and phosphorus loads in soils and local waters.

We believe the evidence is clear that the largely voluntary approaches taken to date, with technical assistance and substantial public financing, are not working.

Economists have called for a fundamental shift in policies controlling agricultural pollution. Instead of offering polluters subsidies to clean up their operations, these experts argue, the strategy should be to pay farmers for performance, based on environmental outcomes that can be measured or predicted at appropriate scales and specific places.

Under this approach, government would set limits on the amount of nutrients that can be lost to the environment, and farmers would choose how to meet them, based on what kinds of action work best for their specific soils and climate. For example, restoring wetlands within the watershed could help to capture nutrients that unavoidably wash off of farmlands.

The ongoing shift to electric vehicles offers an opportunity to grow far less grain for ethanol, which doesn’t even help the climate. And in the long run, developing efficient, plant-based food systems would both reduce nutrient pollution and limit climate change.

In June 2022, the Government Accountability Office concluded that federal agencies charged with preventing and controlling harmful algal blooms and dead zones under a 1998 law have failed to establish a national program to address these issues. Fifty years after the federal Clean Water Act was enacted, we believe such a program is long overdue.

This article is republished from The Conversation under a Creative Commons license. Read the original article.