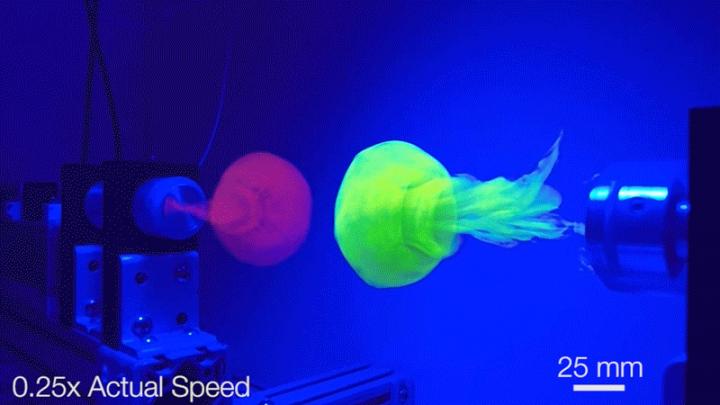 IMAGE: Vortex cannons fire in a 75-gallon aquarium to produce the vortices. Each vortex was dyed a different color, so researchers could observe how they interact.

Turbulence is everywhere -- it rattles our planes and makes tiny whirlpools in our bathtubs -- but it is one of the least understood phenomena in classical physics.

But the mechanics of that descent into chaos have puzzled scientists for centuries.

Researchers at the Harvard John A. Paulson School of Engineering and Applied Sciences (SEAS) may have identified a fundamental mechanism by which turbulence develops by smashing vortex rings head-on into each other, recording the results with ultra-high-resolution cameras, and reconstructing the collision dynamics using a 3D visualization program. Coupled with the analysis of numerical simulations performed by collaborators at the University of Houston and ENS de Lyon, the researchers have gained unprecedented insight into how fluidic systems transform from order to disorder.

The research is described in Science Advances.

"Our ability to predict the weather, understand why a Boeing 747 flies even with turbulent currents in its wake, and determine the global flows in the ocean depends on how well we model turbulence," said Shmuel Rubinstein, Associate Professor of Applied Physics at SEAS and corresponding author of the paper. "However, our understanding of turbulence still lacks a mechanistic description that explains how energy cascades to smaller and smaller scales until it is eventually dissipated. This research opens the door to just that kind of understanding."

"Trying to make sense of what is going on in an exceedingly complex system like turbulence is always a challenge," said Rodolfo Ostilla-Mónico, Assistant Professor of Mechanical Engineering at the University of Houston and corresponding author of the paper. "At every length-scale, vortices are straining and compressing each other to generate a chaotic picture. With this work, we can begin to isolate and watch simple pair interactions, and how these lead to rich dynamics when enough of them are present."

Physicists have been using vortex colliders to understand turbulences since the 1990s, but previous experiments haven't been able to slow down and reconstruct the mechanics of the collision, the moment it descends into chaos. To do that, the researchers synchronized a powerful scanning laser sheet with a high-speed camera -- capable of snapping hundreds of thousands of images per second -- to rapidly scan the entire collision in real time.

They used vortex cannons in a 75-gallon aquarium to produce the vortices. Each vortex was dyed a different color, so researchers could observe how they interact when they violently collide. It takes less than a second for the rings to disappear into a puff of dye after the collision, but within that time, a lot of physics happens.

First, the rings stretch outward as they smash into each other and the edges form antisymmetric waves. The crests of these waves develop into finger-like filaments, which grow perpendicularly between the colliding cores.

These filaments counter-rotate with their neighbors, creating a new array of miniature vortices that interact with each other for milliseconds. Those vortices also form filaments, which in turn form vortices. The research team observed three generations of this cascading cycle, each one the same as before, only smaller -- a Russian nesting doll of disorder.

"This similar behavior from the large scale to the small scale emerges very rapidly and orderly before it all breaks down into turbulence," said Ryan McKeown, a graduate student at SEAS and first author of the paper. "This cascading effect is really exciting because it could point to a universal mechanism for how these interactions work, independent of scale."

"This is a great indication that while this is a different system--for a brief time--it is creating the same conditions of turbulence. It's a starting point," said McKeown.