URBANA – As the Asian carp population grows and the threat of the invasive species entering Lake Michigan through one of the Chicago canals is monitored, a University of Illinois researcher believes using two barrier methods is better than one.

Cory Suski experimented with adding carbon dioxide (CO2) into the water as a supplemental tool to work in tandem with the electric fence, which has been used to divert the carp from entering the canal, with the goal of providing a second line of defense.

Suski found that carbon dioxide is quick and effective in repelling fish from an area.

"In one experiment using tanks, we could actually chase the fish with the gas," Suski said. "Once carbon dioxide reached a threshold, fish would 'choose' to leave the area of the tank that had CO2. The fish initially showed signs of being irritated or agitated after exposure, and eventually they lost equilibrium. If fish cannot leave or are slow to leave the carbon dioxide accumulates to a point where it will act like an anesthetic gas used for patients who are undergoing surgery."

Suski knew that CO2 had already been proven to be effective at fish hatcheries. The CO2 was used to move fish from one area to another, making it easier to harvest them. He wanted to see if the technique could be applied to the Chicago River canals and at other vulnerable entry points into the Great Lakes.

In addition to studies quantifying behavior and stress physiology in response to CO2, Suski used a laboratory tank called a shuttle box that contains two chambers and a connecting canal. The level of carbon dioxide can be controlled on either side of the box. Tests were performed on bighead carp and silver carp as well as bluegill and largemouth bass so the effects on native species of fish could be confirmed. CO2 had the same effect on all four species. 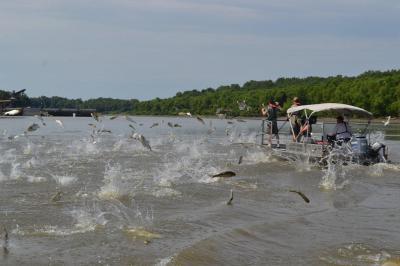 Although Asian carp are known to jump when water is agitated, Suski said the fish did not jump to escape the carbon dioxide.

"What we learned is that CO2 does not appear to be species specific," Suski said. "This is good because there are other species besides Asian carp that we don't want swimming back and forth between the river and the Great Lakes. The electric fence is also a non-species-specific barrier, and all non-physical barriers have weaknesses. The CO2 barrier isn't intended to replace the electric fence. It's another tool, a redundant barrier that further increases the likelihood of stopping fish from getting through," he said.

Because carp are known to jump, Suski was prepared for the possibility that the carp would try to jump out of the shuttle box to escape the carbon dioxide. "We covered the tanks to keep them contained, but they didn't jump," he said.

Suski also conducted an experiment on a larger scale in a small, outdoor pond about 40 feet by 30 feet but without fish. "We wanted to see how easy it would be to put CO2 into a lot of water," Suski said. "As it turned out, it's shockingly easy. We did it with a hose and a gas source and just bubbled it in."

Suski said the next step will be to test it in the field on a larger scale, determining the costs and the effect it may have on non-target species and on the environment. The elevated CO2 makes the water slightly more acidic so Suski wants to learn how the higher acidity affects fish, the water, and other organisms.

"What we're working on right now is seeing how effective CO2 is on small fish," Suski said. "In theory, CO2 could eliminate all fish from an area, regardless of their size, whereas we know that for small fish, 1 to 3 inches, the electrical barrier becomes less effective. If smaller fish don't like the CO2 and choose to swim away, that's a potential shortcoming of the electrical barrier that CO2 can address."

According to Suski, Asian carp grow rapidly and totally disrupt the food chain. All fish depend upon zooplankton (small animals) and phytoplankton (small plants) when they are very small. "Asian carp eat these items that the other fish and other aquatic organisms depend upon, thus pulling the rug out from the bottom of the food chain," Suski said.

Suski said Asian carp are already in the Mississippi River all the way up to Minnesota as well as in South Dakota.

"Once they get into the Great Lakes, there is concern that they could do well there and further spread to other canals throughout eastern North America," Suski said.