Understanding the biological and ecological implications of safe nanotechnology

Nanoscale science and technology has seen exciting advances recently in drug delivery, electronics, energy and environmental applications. According to international scientific conventions, nanomaterials are those whose at least one dimension is less than or equal to 10-9 m. At the same time, there is a great possibility for nanomaterials to enter ecosystems at the points of use or disposal, which could lead to negative environmental implications.

Our recent paper, "Dendrimer-fullerenol soft-condensed nanoassembly" published in The Journal of Physical Chemistry C, showed how the soft nanomaterial dendrimer can be used to remediate the environment from potentially toxic nanomaterials. Here, we used fullerenol – a 60 carbon molecule in the shape of a buckyball and functionalized with hydroxyl groups – as a model system. Such an assembly also has implications for drug delivery.

We found that the assemblies of dendrimers and fullerenols were strong, spontaneous, and thermodynamically favorable at neutral water pH and ambient temperature and pressure. 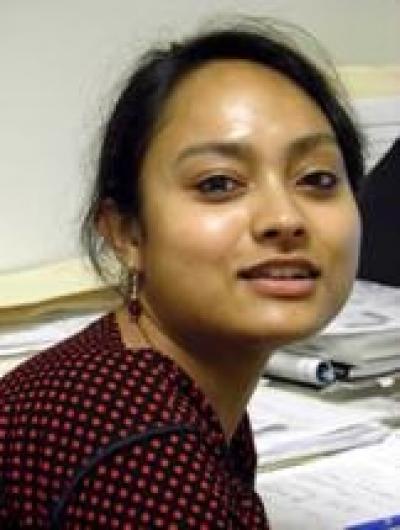 Priyanka Bhattacharya is a Ph.D. student at Clemson Universitys College of Engineering and Science.

With the advent of new technologies, the public often becomes skeptical of their implications on the environment. In our group, we strive to understand the biological and ecological implications of safe nanotechnology. This article was a part of that effort. Fullerenols have shown great potential in nanomedicine as well as in electronics. Dendrimers of generations five and below have been proven biocompatible, and have been used as MRI contrast agents and drug delivery vehicles. In this paper we provided a proof-of-concept on the use of a benign dendritic technology as a robust drug delivery vehicle and a solution to environmental remediation of discharged nanomaterials.

Our group, led by my advisor Dr. Pu-Chun Ke and funded by the National Science Foundation, has delved into a crucial topic of frontier research termed "nanoparticle-protein corona". In short, nanoparticles do not interact directly with living systems but are often coated with biological fluids in the form of a protein corona. Another direction in our group, through collaboration between Dr. Ke and Dr. David Ladner in Clemson's Department of Environmental Engineering and Earth Sciences and funded by the U.S. Environmental Protection Agency is to employ dendritic polymers for remediating oil spills.