Two University of Iowa researchers and their colleagues have advanced scientists' knowledge of the Earth's Van Allen radiation belts by answering a long-standing question about the belts.

Craig Kletzing and William Kurth of the UI Department of Physics and Astronomy note that since 1958 when UI space physicist James Van Allen discovered the doughnut-shaped bands of intense radiation encircling the Earth, scientists have wondered just how and where electrons trapped within the belts get their ultra-high energies.

In a paper published in the July 25 issue of the online journal Science Express, researchers say they examined two possibilities: first, the long-accepted theory that the electrons get their energy as they make their way into the belts from outside them, or that they are accelerated inside the belts. Using measurements from NASA's twin Van Allen Probes mission satellites, the researchers determined that the electrons can also gain their energy inside the belts.

Kletzing says the way in which scientists solved the mystery is similar to the way in which a person might determine whether a woman wearing a strong perfume is standing in the doorway, in this case representing an external electron acceleration source, or if she is in the middle of the room.

"If the woman is in the doorway, then you should detect a decline in the intensity of the fragrance as you move away from the door," says Kletzing. "But if she is in the middle of the room, then the scent will be strongest inside the room, decreasing in all directions away from where she is standing." 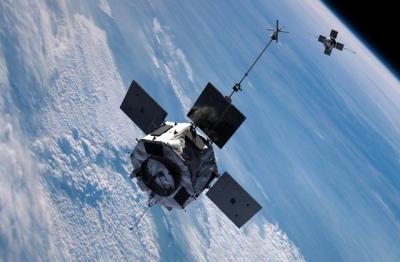 An artist's rendering shows the twin satellites of the Van Allen Probes mission in tandem orbit above the Earth.

Launched Aug. 30, 2012, the Van Allen Probes mission consists of two satellites with slightly different orbits so that over time, one moves ahead of the other. Orbiting the Earth from about 300 miles above the ground to as far as 25,000 miles at apogee, the satellites fly nearly identical orbits during their two-year mission.

The UI-designed-and-built part of the mission is called EMFISIS, for Electric and Magnetic Field Instrument Suite with Integrated Science. The $30 million NASA-funded project to study how various amounts of space radiation form and change during space storms is led by Kletzing, the principal investigator, and Kurth, UI research scientist and co-investigator.

In addition to Kletzing and Kurth, co-authors of the Science Express paper include lead author Geoff Reeves of Los Alamos National Laboratory and researchers from the University of New Hampshire, University of Colorado, NASA Goddard Space Flight Center, UCLA and The Aerospace Corporation in El Segundo, Calif.

The Van Allen Probes mission is the second mission in NASA's Living With a Star program to explore aspects of the connected sun-Earth system that directly affect life and society. The program is managed by NASA's Goddard Space Flight Center in Greenbelt, Md.