Researchers have found the first definitive evidence of how silicalite-1 (MFI type) zeolites grow, showing that growth is a concerted process involving both the attachment of nanoparticles and the addition of molecules.

Both processes appear to happen simultaneously, said Jeffrey Rimer, an engineering professor at the University of Houston and lead author of a paper published Thursday in the journal Science.

He said a second component to the research could have even more lasting impact. He and researcher Alexandra I. Lupulescu used a new technique allowing them to view zeolite surface growth in real time, a breakthrough Rimer said can be applied to other types of materials, as well.

Typically, researchers examine zeolite growth by removing crystals from the natural synthesis environment and analyzing changes in their physical properties, said Rimer, Ernest J. and Barbara M. Henley Assistant Professor of Chemical and Biomolecular Engineering at UH. That has made understanding the fundamental mechanism of zeolite growth more challenging.

Zeolites occur naturally but can also be manufactured. This research involved silicalite-1, a synthetic, aluminum-free zeolite that has served as a prototype in literature for studying zeolite growth. 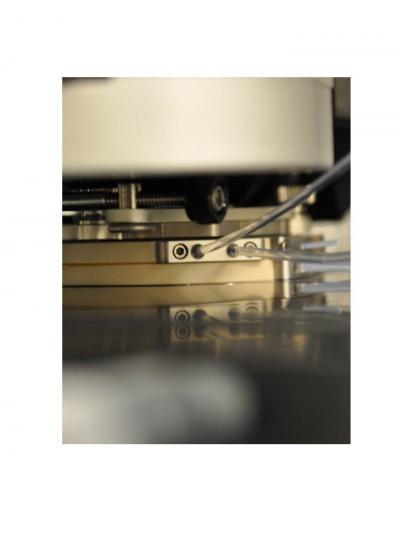 This is a photograph of the high temperature liquid cell attached to the atomic force microscope (MFP-3D-SA, Asylum Research, Santa Barbara, CA). The cell is equipped with inlet/outlet ports for liquid injection and a heating element that regulates temperatures as high as 300 C.

For more than two decades, researchers have theorized that nanoparticles, which are known to be present in zeolite growth solutions, played a role in the growth, but there was no direct evidence. And while most crystals grow through classical means – the addition of atoms or molecules to the crystal – the presence and gradual consumption of nanoparticles suggested a nonclassical pathway for zeolite crystallization.

Rimer and Lupulescu found that both classical and nonclassical growth models were at work.

"We have shown that a complex set of dynamics takes place," Rimer said. "In doing so, we have revealed that there are multiple pathways in the growth mechanism, which solves a problem that has been debated for nearly 25 years."

It solves a mystery in the world of crystal engineering, but how they did it may have a more lasting impact. Rimer and Lupulescu, who did the project as part of her dissertation, earning her Ph.D. in chemical engineering from UH's Cullen College of Engineering in December, worked with California-based Asylum Research. They used time-resolved Atomic Force Microscopy (AFM) to record topographical images of silicalite-1 surfaces as they grew.

AFM provides near molecular-resolution 3-D images of the crystal surface. Rimer said the technology, along with software developed by Asylum Research and his lab, made it possible to study the growth in situ, or in place. While his lab works at temperatures up to 100 degrees Celsius, the instrumentation can handle temperatures as high as 300 C, making it possible to use it for a number of materials that grow in solvothermal conditions, he said.