Split-brain research has been conducted for decades, and scientists have long ago shown that language processing is largely located in the left side of the brain. When words appear only in the left visual field –– an area processed by the right side of the brain –– the right brain must transfer that information to the left brain, in order to interpret it. The new study at UCSB shows that healthy test subjects respond less accurately when information is shown only to the right brain.

While hemispheric specialization is considered accurate, the new study sheds light on the highly complex interplay –– with neurons firing back and forth between distinct areas in each half of the brain. The findings rely on extremely sensitive neuroscience equipment and analysis techniques from network science, a fast-growing field that draws on insights from sociology, mathematics, and physics to understand complex systems composed of many interacting parts. These tools can be applied to systems as diverse as earthquakes and brains.

Fifty years ago, UC Santa Barbara neuroscientist Michael S. Gazzaniga moved the field forward when he was a graduate student at the California Institute of Technology and first author of a groundbreaking report on split-brain patients. The study, which became world-renowned, was published in the Proceedings of the National Academy of Sciences (PNAS) in August 1962. This week, in the very same journal, Gazzaniga and his team announced major new findings in split-brain research. The report is an example of the interdisciplinary science for which UCSB is well known.

"The occasion of this paper is on the 50th anniversary of the first report on human split-brain research reported in PNAS," said Gazzaniga. "That study showed how surgically dividing the two hemispheres of the human brain –– in an attempt to control epilepsy –– allowed for studying how each isolated half-brain was specialized for cognitive function.

"In the present study, new techniques –– not present 50 years ago –– begin to allow for an understanding of how the normal, undivided brain integrates the special functions of each half brain. It is a new beginning and very exciting," said Gazzaniga, professor of psychology in UCSB's Department of Psychological and Brain Sciences, and director of UCSB's SAGE Center for the Study of Mind. 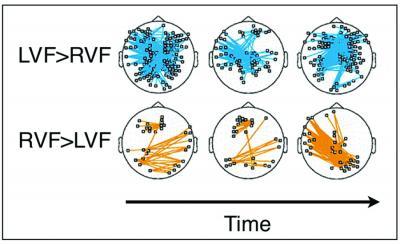 Karl W. Doron, first author and a postdoctoral scholar with Gazzaniga, said: "This study shows that the strength of communication across the brain changes dynamically, when information is exchanged between the right and left hemispheres via the corpus callosum, which connects both sides of the brain. The findings shed light on the neural underpinnings of inter-hemispheric communication first reported 50 years ago in the classic split-brain studies performed by Gazzaniga and colleagues."

Doron explained that years of research –– in both clinical patient populations and healthy individuals –– have shown that the brain is made up of specialized modules that preferentially process certain types of information.

When linguistic information, such as a word or pronounceable non-word, is shown directly to the left brain, people are better at deciding whether or not it is a real word, said Doron.

In the new study, researchers used magnetoencephalography, or MEG, a non-invasive tool that measures the continuous brain activity of nine healthy young adults. The participants were briefly flashed a stimulus that was either a real word or a "word-like" non-word. The stimulus was randomly shown either to the left or right brain, using a split-visual field experimental technique.

MEG allows researchers to peer into brain activity at the rate of 512 images per second, while fMRI only allows for images to be recorded at the rate of one image every two seconds. The researchers processed this temporal data using novel network analysis techniques drawn from the mathematical and physical sciences that enable them to examine the dynamic nature of brain communication. This novel network analysis allows the data to be presented in movie form, rather than as snapshots. The researchers found that the strength of connections between the left and right hemispheres depended on whether the stimulus was shown to the left or right brain hemisphere.

"A larger number of statistically significant connections were present at several time points after the stimulus when the word or pronounceable non-word was shown to the right brain and needed to be transferred to the language-specialized left brain," said Danielle S. Bassett, UCSB Sage Junior Research Fellow in the Departments of Physics and the Department of Psychological and Brain Sciences.

"The results further suggest that brain function measured with MEG can be broken into functional communities that rearrange their organization over time –– based on whether the left or right brain saw the stimulus, and thus whether inter-hemispheric information transfer must take place," said Bassett.

While working on his Ph.D. with Gazzaniga, which he completed in 2011, Doron directed the MEG experiments at the Otto-von-Guericke University in Magdeburg, Germany over a two-month period, with support from Gazzaniga's German Humboldt Fellowship Award. The MEG machine is composed of a vertical cylinder that is positioned over the head and held in place with a type of helmet. 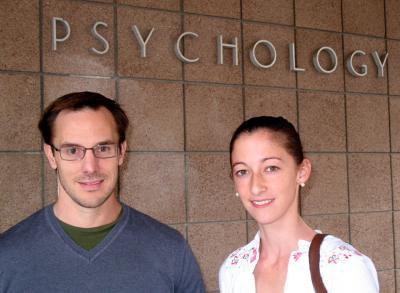 Doron's research combines data from cognitive experiments with a variety of neuroimaging modalities to understanding the neuroscientific underpinnings of the mind, with specific focus on neural oscillatory processes and attention. Doron's current work merges graph theoretical, information theoretical, and complex systems approaches in an effort to describe the large-scale functional connectivity of brain networks.

Bassett's education is highly interdisciplinary, with studies in physics, mathematics, psychology, and neuroscience funded by the Winston Churchill Scholarship and the NIH-Cambridge Scholarship. She received her Ph.D. in physics at the University of Cambridge where she had supervisors in several disciplines, including psychiatry. Her current studies are carried out within UCSB's Departments of Physics, and Psychological and Brain Sciences, and the Sage Center for the Study of the Mind. She was recently recognized with the Alumni Achievement Award for extraordinary professional accomplishment before age 35 from her alma mater, the Schreyer Honors College and Penn State University.

Gazzaniga has contributed remarkable advances in the understanding of functional lateralization in the brain, and how the cerebral hemispheres communicate with one another. He has published many books, which are accessible to a lay audience, such as Mind Matters and Nature's Mind. His many scholarly publications include the landmark 1995 book for MIT Press, The Cognitive Neurosciences, now in its fourth edition, and recognized as the sourcebook for the field. He is the founder and former editor-in-chief of the Journal of Cognitive Neuroscience, and was a member of the President's Council on Bioethics from 2001-2008. 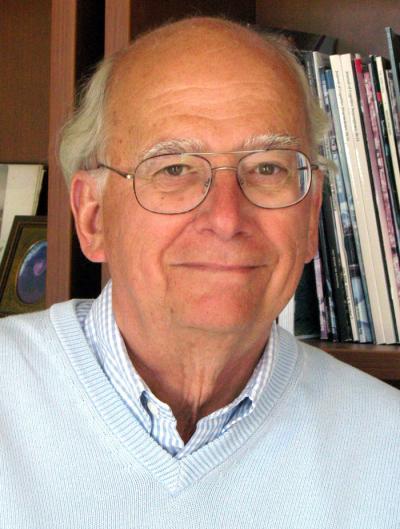 This is an image of Michael Gazzaniga.