(Santa Barbara, California) –– Building on research published eight years ago in the journal Chemistry and Biology, Kenneth S. Kosik, Harriman Professor in Neuroscience and co-director of the Neuroscience Research Institute (NRI) at UC Santa Barbara, and his team have now applied their findings to two distinct, well-known mouse models, demonstrating a new potential target in the fight against Alzheimer's and other neurodegenerative diseases.

The results were published online June 4 as the Paper of the Week in the Journal of Biological Chemistry. As a Paper of the Week, Kosik's work is among the top 2 percent of manuscripts the journal reviews in a year. Based on significance and overall importance, between 50 and 100 papers are selected for this honor from the more than 6,600 published each year.

Kosik and his research team focused on tau, a protein normally present in the brain, which can develop into neurofibrillary tangles (NFTs) that, along with plaques containing amyloid-ß protein, characterize Alzheimer's disease. When tau becomes pathological, many phosphate groups attach to it, causing it to become dysfunctional and intensely phosphorylated, or hyperphosphorylated. Aggregations of hyperphosphorylated tau are also referred to as paired helical filaments. 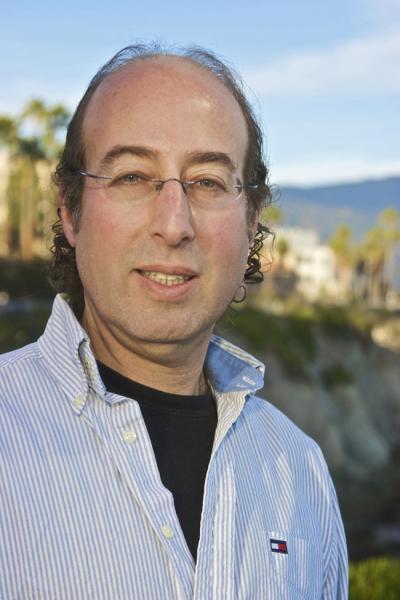 This is Kenneth S. Kosik, University of California - Santa Barbara.

"What struck me most while working on this project was how so many people I'd never met came to me to share their stories and personal anxieties about Alzheimer's disease," said Xuemei Zhang, lead co-author and an assistant specialist in the Kosik Lab. "There is no doubt that finding therapeutic treatment is the only way to help this fast-growing population." Israel Hernandez, a postdoctoral scholar of the NRI and UCSB's Department of Molecular, Cellular and Developmental Biology, is the paper's other lead co-author.

Treatments for hyperphosphorylated tau, one of the main causes of Alzheimer's disease, do not exist. Current treatment is restricted to drugs that increase the concentration of neurotransmitters to promote signaling between neurons.

However, this latest research explores the possibility that a small class of molecules called diaminothiazoles can act as inhibitors of kinase enzymes that phosphorylate tau. Kosik's team studied the toxicity and immunoreactivity of several diaminothiazoles that targeted two key kinases, CDK5/p25 and GSK3ß, in two Alzheimer's disease mouse models. The investigators found that the compounds can efficiently inhibit the enzymes with hardly any toxic effects in the therapeutic dose range. 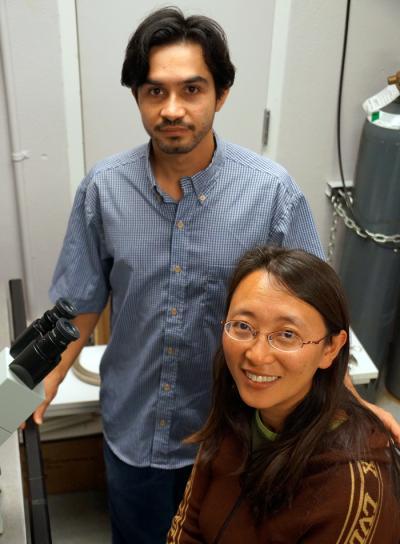 Treatment with the lead compound in this study, LDN-193594, dramatically affected the prominent neuronal cell loss that accompanies increased CDK5 activity. Diaminothiazole kinase inhibitors not only reduced tau phosphorylation but also exerted a neuroprotective effect in vivo. In addition to reducing the amount of the paired helical filaments in the mice's brains, they also restored their learning and memory abilities during a fear-conditioning assay.

Madison Cornwell, a Beckman Scholar with UCSB's Center for Science and Engineering Partnerships who worked in Kosik's lab, added: "As a beginning step, we demonstrated that two of these compounds were successful in clearing the brain of tau tangles in a mouse model, but someday inhibitors of these kinases may serve to ameliorate the symptoms of Alzheimer's disease in patients." 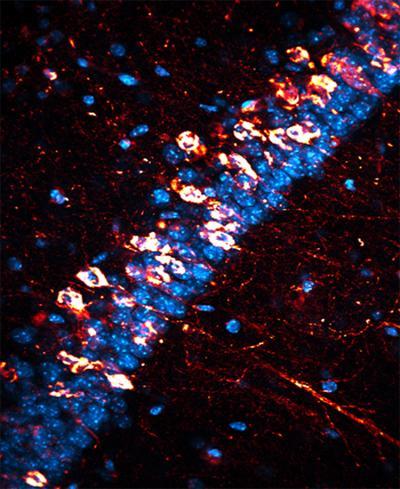 Neurofibrillary tangles, immunostained bright red in pyramidal neurons here, are one of the hallmarks of Alzheimer's disease.