Naturally occurring electricity in our cells is key to how our bodies function, and that includes the healing of wounds.

And externally applied low-amplitude electric fields have been shown to help hard-to-heal chronic wounds, like those associated with diabetes, where there is insufficient blood supply and drug treatments are not effective. The externally applied electric field manipulates the body's naturally occurring electricity, such that the new vessels are formed, and blood supply to the wound is increased.

University of Cincinnati physics and biomedical engineering researchers recently tested for the most-effective magnitude and frequency when applying an external low-amplitude electric field to vascular cells, which are key to healing chronic wounds. Physics doctoral student Toloo Taghian will present the results at the March 3-7 American Physical Society meeting in Denver. The title of her presentation is "Co-Regulation of Cell Behavior by Electromagnetic Stimulus and Extracellular Environment." 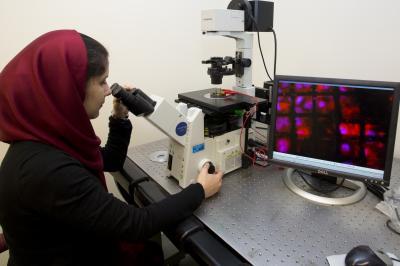 The team discovered that high-frequency electrical stimulus, similar to that generated by cell phones and Wi-Fi networks, increased the growth of blood vessel networks by as much as 50 percent, while low-frequency electrical stimulus did not produce such an effect. As part of their work, the UC team has developed a specialized antenna to apply the electrical signals to a localized wound, and that design is now the subject of a provisional patent.

The high-frequency electrical stimulus is able to change the ionic environment surrounding the endothelial cells, which form the lining of blood vessels. Inside the cells, this stimulus can create links with proteins (proteins have existing charges that react with the applied electrical field) to activate pathway signals leading to growth in the capillary network. The high-frequency electrical stimulus also causes cells to produce chemicals called "growth factors" that help sustain growing vascular networks.

Said Taghian, "Electrical stimulation activates the pathway for angiogenesis (formation of new blood vessels), and the vascular network growth is enhanced. We can expect that, as a result, wound closure would be enhanced, leading to a faster healing." 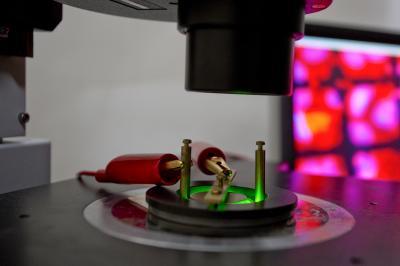 This is a micro-fabricated device for live imaging of single cell response during electrical stimulation.

The potential for electrical-based treatment of wounds is far reaching. Given the targeted, localized nature of such wound treatment, the application of electrical stimulus could replace or reduce the need for drug-based treatments which affect the entire body and may carry side effects. Importantly, such therapy could be applied using a hand-held device without the need to remove the wound dressing.

The stimulus frequency used by the team was as high as 7.5 billion cycles per second (Gigahertz, or GHz), and as low as 60 cycles per second (Hertz, or Hz), which is the same frequency used in 120V power outlets in the United States. The vascular tissue cells were exposed to the electrical fields for one hour per day for seven days, and the rate of wound healing was observed for 24 hours after each treatment. 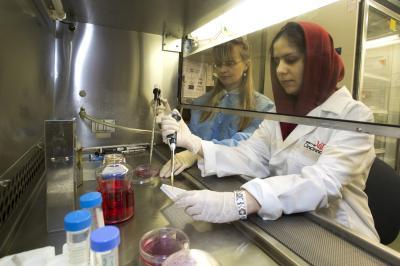