Among the research presented by University of Cincinnati faculty and students at the April 18-22 Society for American Archaeology meeting will be an examination of early agriculture in southern Europe in the 7th century B.C., research on the role of volcanic activity in the rise and fall of the Mayan metropolis of Tikal, and study of hunting dogs in small-scale societies. See more below.

In conducting research on hunting dogs in lowland Nicaragua, UC researchers have found that older and male dogs seem to enjoy better success rates than do younger and female dogs. Also, dogs are more suited to wildlife sustainability than other hunting options. Hunters with firearms tend to disproportionately hunt prey that lives in trees, including slow-breeding primates, whereas hunters with dogs tend to harvest relatively fast-breeding animals such as agoutis, pacas and armadillos.

The research examined variables such as age and sex on the amount of harvested game that dogs contribute from subsistence hunting in an indigenous community where such hunting has had a long and important role in community survival. Community members in the region capture about 85 percent of harvested mammals with the aid of dogs.

Among the specific findings: As both male and female dogs reach three years of age, they tend to increase their hunting success and produce greater harvests. Older, male and female dogs in the study population returned more game to their owners than did younger dogs. And bigger dogs are able to track and corral bigger prey, which increases their hunting return rates, and in general, male dogs are bigger than females.

The UC research was conducted in Nicaragua's Bosawas Biosphere Reserve, which is part of the largest unbroken tracts of Neotropical rainforest in Central America, north of the Amazon Rainforest. The researchers based the study on the hunting activities of the Mayangna and the Miskito, two indigenous ethnic groups, who live along a tributary of the Coco River, not far from the border with Honduras.

EARLY AGRICULTURE IN SOUTHERN EUROPE PART OF A DIVERSE DIET

UC excavations in Vashtëmi, Albania, one of the earliest farming sites in Europe, show that Vashtëmi, was occupied around 6,500 cal BC, making it one of the earliest farming sites in Europe. The location of early sites such as Vashtëmi near wetland edges suggests that the earliest farmers in Europe preferentially selected such resource-rich settings to establish pioneer farming villages. At Vashtëmi, the researchers have found cereal-based agriculture including emmer, einkorn and barley; animals such as pigs, cattle and sheep or goats (the two are hard to tell apart for many bones of the skeleton); and deer, wild pig, rabbit, turtle, several species of fish and eels. What seems evident is that the earliest farmers in the region cast a wide net for food resources, rather than relying primarily on crops and domesticated animals, as is widely assumed. Read more on this research.

VOLCANISM AND THE RISE OF A MAYA METROPOLIS

While others have argued that rapid economic growth, military conquest, and political domination led to the rise of Tikal, inexhaustible fertile soils would have been crucial to the city-state's growth, development, and sustainability. X-ray diffraction and x-ray fluorescence results from natural depressions and reservoir sediments provide the first clear-cut evidence of a long-term explosive volcanic history of the region. Ash fall from explosive volcanic events blanketed Tikal throughout the Late Holocene, providing the Maya with a mechanism to maintain soil fertility on a limestone bedrock surface in a tropical environment. 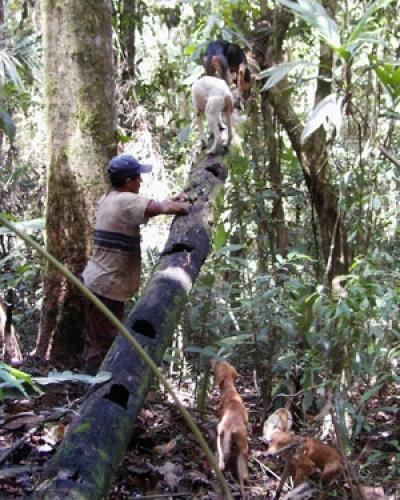 These are Nicaraguan hunters and their dogs on a hunt in the forest.

UC researchers continue to investigate agriculture among the Maya in what are called "bajos," which are – essentially – seasonal swamps where the muds become very deep very quickly when it rains. UC findings at Bajo Akalches near the ancient Maya city of El Mirador suggest that while large areas within bajos were likely poorly suited for agriculture, these widespread depressions included important tracts of arable land and other vital resources, including water and timber.

RESOURCES AVAILABLE TO SECOND-TIER CITIES OF THE MAYA

Excavations at the Classic Maya site of Say Kah, Belize, focus on contextualizing this secondary site within the Three Rivers region, an area dominated by the nearby center of La Milpa. Utilizing a heterarchical model of organization, we explore possible resources – both material and non-material – that may have been focuses of local identity assertion and power for the ancient occupants. We consider burial contexts, subfloor artifact deposits, and architectural organization as avenues for illuminating expressed identities and relationships; these are also fruitful contexts for comparison with other "secondary centers," clarifying the roles such sites played within sociopolitical hierarchies.

A CASE STUDY OF CHERT SOURCING IN THE OHIO RIVER VALLEY