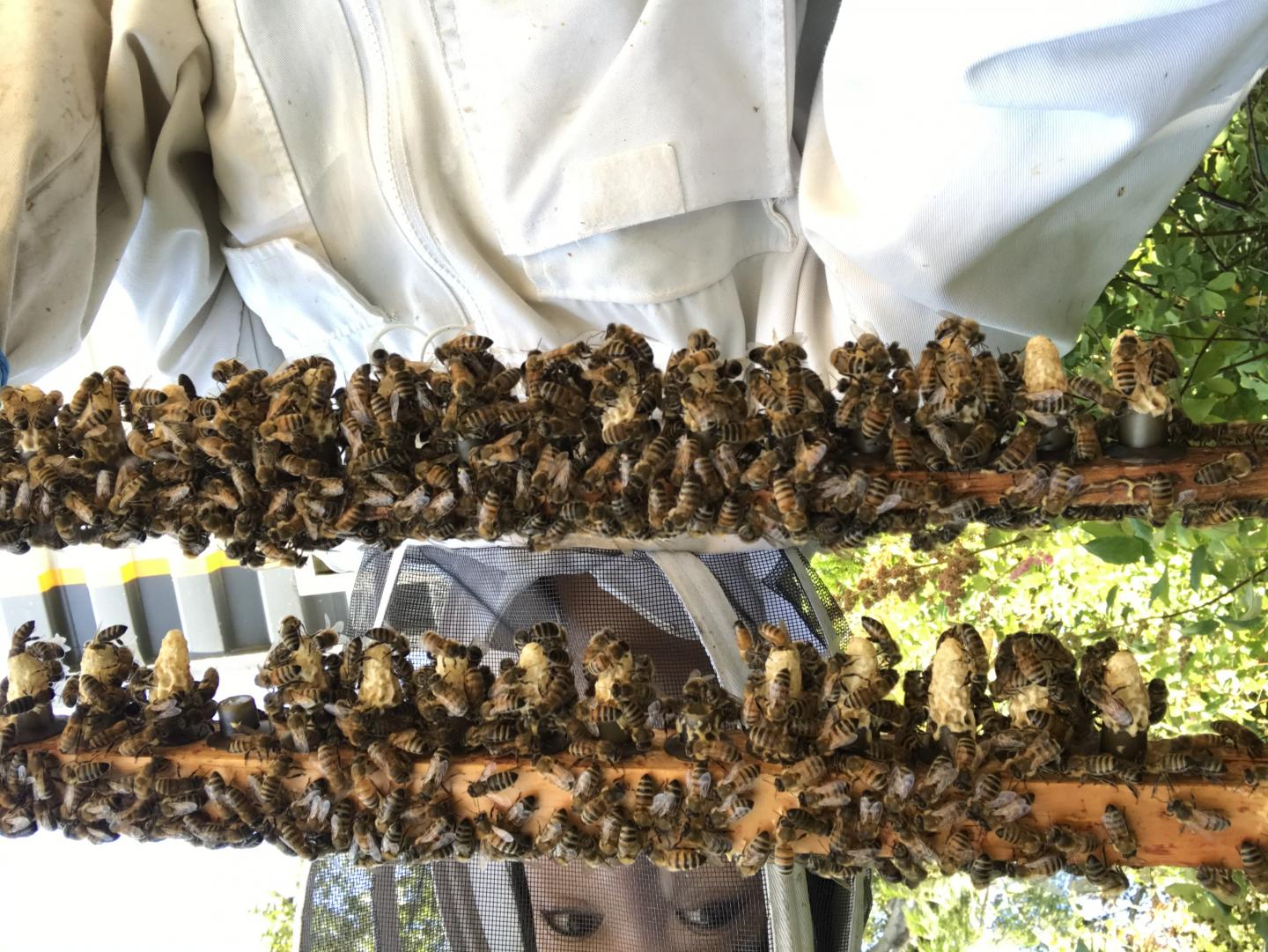 Scientists at UBC are unravelling the mysteries behind a persistent problem in commercial beekeeping that is one of the leading causes of colony mortality--queen bee failure.

This occurs when the queen fails to produce enough fertilized eggs to maintain the hive, and is regularly cited by the Canadian Association of Professional Apiarists as one of the top causes of colony mortality.

In recent research outlined in BMC Genomics, University of British Columbia and North Carolina State University researchers identified specific proteins that are activated in queen bees under different stressful conditions: extreme heat, extreme cold, and pesticide exposure--conditions that can affect the viability of the sperm stored in the honey bee queen's body. If the queen does not have enough live sperm to produce enough fertilized eggs to maintain its population of worker bees, the colony will eventually die out.

Scientists then measured the levels of these markers in a collection of queens in B.C. that had failed in the field, and found that they had higher levels of heat-shock and pesticide protein markers compared to healthy queens. The results pave the way for a future diagnostic test to help beekeepers understand, and prevent, queen bee failure in the future.

"Currently, there isn't any method to actually figure out why the queen has failed in a colony, and that's important because there are quite a few different ways that that could happen," said lead author Alison McAfee, a biochemist at the Michael Smith Labs at UBC and postdoctoral fellow at NC State. "This is a very understudied area."

Previous research conducted by McAfee and her colleagues determined that queens are safest when kept between 15 and 38 degrees Celsius, and identified five protein markers associated with heat-shock in queens. Now, McAfee has confirmed the two most identifiable biomarkers for heat-shock, along with two protein markers useful for detecting cold-shock, and two associated with sublethal levels of pesticides. The findings open the door to testing that will provide beekeepers with information needed to ensure the long-term viability of their hives.

"We want to develop a diagnostic test that we can do on a failed queen, which can provide the beekeeper with information on what happened to her in the past that made her fail now," explained McAfee. "If we can do that reliably, then then the beekeeper could do more to try to prevent that from happening in the future."

Currently, beekeepers simply toss away a failed queen. In the future, said McAfee, "they could ship her to a lab, which would measure the abundance of all these different markers and send a report with information on the likelihood of her being stressed by cause X, Y and Z."

When it came to failed queens from the field in B.C., the researchers were surprised to find elevated markers associated with heat stress and, to a lesser extent, pesticide exposure.

"We didn't have any reason to believe that these queens were heat shocked," said McAfee. "A substantial number of them had elevated levels of those particular markers, which could mean that there is a lot more temperature stress going on out there than we would expect. It could also be that those markers also become elevated due to other kinds of stresses that we haven't looked at yet."

The effect of extreme temperatures on queen bees is a large concern for Canadian beekeepers who import 250,000 queen bees every year, primarily from Australia, New Zealand, and the U.S. Hours spent in the cargo holds of airplanes and warehouses can subject the queens to large fluctuations in temperature during their journey--something McAfee has investigated in past work.

"Every time we put temperature loggers in queen shipments, we have at least some of the shipments coming back is being outside of that Goldilocks zone between 15 and 38 degrees, so I think that happens more frequently than we have been aware of," she said. "There are no rules for shipping queens, such as including temperature loggers in their shipments. Producers just ship them via whatever courier they choose, and beekeepers are at the mercy of the shipper for handling the package properly."