A group of researchers from Austria have sent twisted beams of light across the rooftops of Vienna.

It is the first time that twisted light has been transmitted over a large distance outdoors, and could enable researchers to take advantage of the significant data-carrying capacity of light in both classical and quantum communications.

The results of the experiment have been published today, 12 November, in the Institute of Physics and German Physical Society's New Journal of Physics, and are accompanied by a video abstract, which can viewed here - http://www.youtube.com/watch?v=OEupkfMqKGY&feature=youtu.be (Note: the video is currently unlisted and remains under embargo alongside the story).

Previous research has shown that if a beam of a certain colour, or wavelength, of light is twisted into a corkscrew shape, the number of channels that data can be transmitted through can be drastically increased. Instead of using one wavelength of light as one channel of communication, the light can be theoretically twisted with an infinite number of turns, with each configuration acting as a single communication channel.

This twisting characteristic, known as orbital angular momentum (OAM), has been exploited by researchers in the past, with some showing that it can be used to transmit 2.5 terabits of data per second--the carrying capacity of more than 66 DVDs--through an optical fibre.

Yet optical fibres are not always suitable, or available, for certain types of communication where light is used--such as Earth to satellite communications--so researchers have been trying to send twisted light over free space whilst at the same time avoiding disturbances from air turbulence. So far, this has only been achieved over small distances in the lab.

In the current study, the researchers, from the University of Vienna and the Institute for Quantum Optics and Quantum Information, used a green laser beam to send twisted light through a lens on top of a radar tower at the Central Institute for Meteorology and Geodynamics in Vienna.

The researchers sent 16 different twisted configurations of a specific wavelength of light to a receiver 3 km away at the University of Vienna. A camera was used to capture the beams of light and an artificial neural network was deployed to reveal the pattern and remove any possible disturbances that may have been caused by air turbulence.

After distinguishing and characterising the 16 different patterns, the researchers then encoded the light with real information-- grey-scale images of Wolfgang-Amadeus Mozart, Ludwig Boltzmann and Erwin Schrödinger.

Co-author of study Mario Krenn said: "We have shown for the first time that information can be encoded onto twisted light and sent through a 3 km intra-city link with strong turbulences. 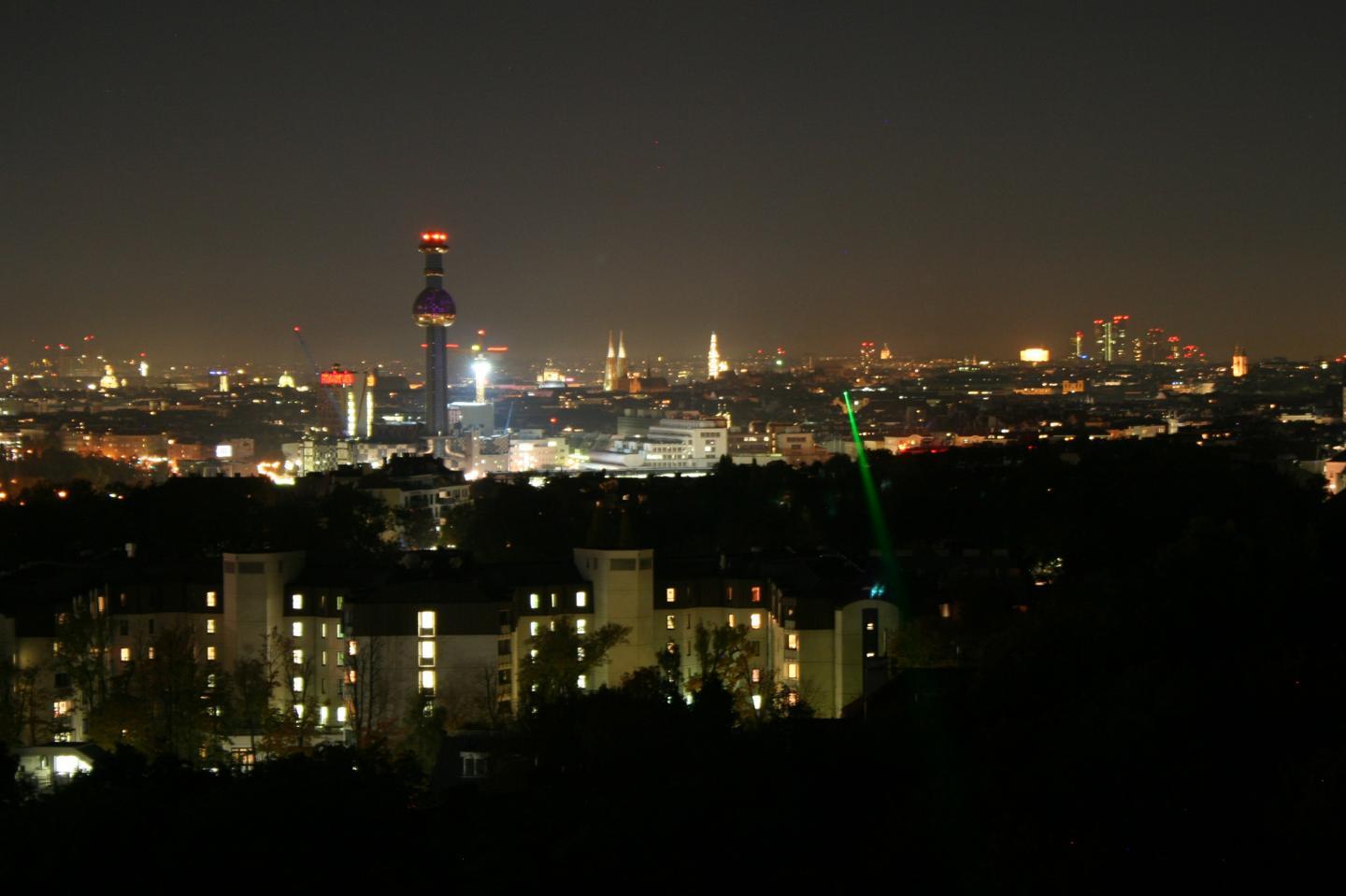 The 3 kilometer free-space experiment wasperformed in the city of Vienna, from ZAMG (Zentralanstalt für Meteorologie undGeodynamik, Central Institute for Meteorology and Geodynamics) to our institute IQOQI. Picture of an alignment laser from IQOQI to ZAMG, captured at ZAMG.

"The OAM of light is theoretically unbounded, meaning that one has, in theory, an unlimited amount of different distinguishable states in which light can be encoded. It is envisaged that this additional degree of freedom could significantly increase data-rates in classical communication."

Krenn and his co-authors also believe that the OAM of light can be used in quantum communication experiments, whereby a secret key made from a string of polarised, or "spinning", photons--individual particles of light--is passed between two individuals to protect data they want to share with each other.

The laws of physics dictate that any attempt by an eavesdropper to intercept the key and try and measure the "spin" of the photons will inherently alter the spin and thus destroy the secret key.

This type of quantum communication has subsequently been labelled as "unbreakable" and Krenn believes that the use of the OAM of light can make secret keys even tougher to crack.

"Quantum communication could profit greatly from the almost infinite number of OAM states. Each single photon can carry an OAM number, thus carrying more information than just one spin, or polarisation, as is common in the most recently proposed quantum experiments," Krenn continued.

"A higher information density could make the secret key more robust against several side-channel attacks by eavesdroppers, which is, of course, a serious problem as we have seen in recent months."

Timeline of the twist

2004: The first successful transmission of data using twisted light in the lab(http://www.opticsinfobase.org/oe/abstract.cfm?id=81642)

2012: Researchers transmit terabits of data per second using the OAM of light(http://www.nature.com/nphoton/journal/v6/n7/full/nphoton.2012.138.html)

2013: Terabits of data per second are transmitted in a specialised optical fibre using the OAM of light(http://www.sciencemag.org/content/340/6140/1545)