Tropical Storm Trami may not be making landfall in the Philippines, but it was close enough to bring heavy rainfall when combined with monsoon rains. NASA's Aqua satellite captured those extensive rains in an infrared image when it passed overhead from space.

The Atmospheric Infrared Sounder instrument known as AIRS that flies aboard NASA's Aqua satellite captured an infrared image of Tropical Storm Trami's cold clouds combined with rainfall from the monsoon on Aug. 20 at 05:05 UTC/1:05 a.m. EDT. Clouds and showers from the combination blanketed the northern half of the Philippines and dropped heavy rainfall. 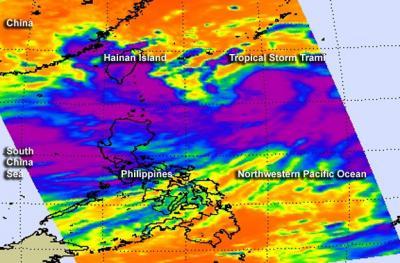 NASA's Aqua satellite captured this infrared image of Tropical Storm Trami (purple) on Aug. 20 at 05:05 UTC/1:05 a.m. EDT when it was blanketing the northern half of the Philippines and dropping heavy rainfall.

Two declarations of "state of calamity" have been issued as a result of heavy rainfall and flooding, according to the Star-online. Those areas include the Cavite province, southwest of Manila, and the town of Santa Rosa in the Laguna province.

After Trami moves across extreme northern Taiwan it is expected to make a final landfall in eastern China.