Tropical Storm Humberto makes an 'A' for Atlantic on satellite imagery

When NASA's Terra satellite passed over Tropical Storm Humberto on Sept. 17, the MODIS instrument aboard took a picture of the storm and it resembled the letter "A" as it moves through the northeastern Atlantic Ocean.

The strongest band of thunderstorms appear in the eastern quadrant of the storm, and the northern and western quadrants also have clouds and showers, but a section of the southern quadrant appears cloud-free, causing Humberto to resemble a letter "A." Forecasters at the National Hurricane Center or NHC noted, however, that the low-level center has been very difficult to locate, in part due to clouds associated a nearby upper-level low that have been masking the lower cloud motions. 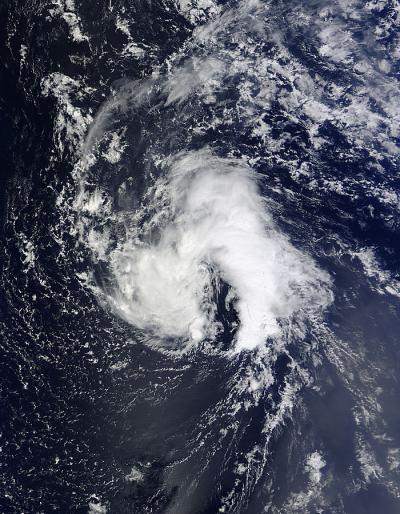 The MODIS instrument aboard NASA's Terra satellite took this visible image of Tropical Storm Humberto in the Atlantic Ocean on Sept. 17 at 13:55 UTC/9:55 a.m. EDT and the storm looked like the letter "A."

At 5 a.m. EDT/0900 UTC Tropical Storm Humberto had maximum sustained winds near 40 mph/65 kph and some strengthening is possible during the next 48 hours, according to the National Hurricane Center. The center of Tropical Storm Humberto was located near latitude 31.4 north and longitude 43.7 west , about 1,050 miles/1,690 km west-southwest of the Azores Islands. Humberto is moving toward the north-northwest near 8 mph/13 kph and is expected to turn north then north-northeast over the next two days.