By using synthetic fibrils made from pure recombinant protein, Penn researchers provide the first direct and compelling evidence that tau fibrils alone are entirely sufficient to recruit and convert soluble tau within cells into pathological clumps in neurons, followed by transmission of tau pathology to other inter-connected brain regions from a single injection site in an animal model of tau brain disease.

The laboratory of senior author Virginia M.-Y. Lee, Ph.D., MBA, director of the Center for Neurodegenerative Disease Research and professor of Pathology and Laboratory Medicine at the Perelman School of Medicine, University of Pennsylvania, published their findings in the Journal of Neuroscience this week.

"Our new model of tau pathology spread provides an explanation to account for the stereotypical progression of Alzheimer's and other related tauopathies by implicating the cell-to-cell transmission of pathological tau in this process," says Lee.

Young mice overexpressing mutant human tau were injected with synthetic preformed tau fibrils. These fibrils were assembled from recombinant full-length tau or truncated tau containing four microtubule-binding repeats. The synthetic tau fibrils caused rapid induction of NFT-like inclusions in the brains of the mice. These inclusions then propagated from injected sites to connected brain regions in a dose- and time-dependent manner. 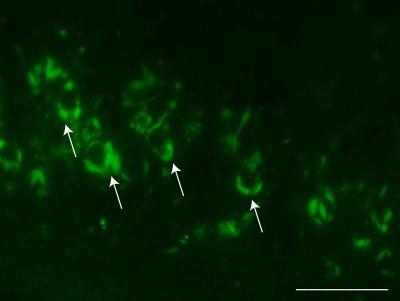 These are neurons filled with tangles (arrows) in medial region of hippocampus one month after injection of synthetic tau fibrils into the hippocampus. Scale = 50um.

Interestingly, injection of the synthetic tau fibrils into either the hippocampus or the striatum and cortex led to distinctly different patterns of spreading, which is reflective of their functional connectivities. The simplest explanation for this phenomenon is that the injected pathological tau is taken up by the processes of normal neurons where it then corrupts the tau in these nerve cells followed by the transport of the corrupted tau along processes where it is released, taken up by other neurons. Then the cycle repeats itself over and over again, thereby driving disease progression, say the researchers.

What's more, unlike tau pathology that spontaneously develops in older Alzheimer's mice, the inclusions induced by the synthetic tau injections in the younger mice more closely resembled Alzheimer's tangles in their physical and biochemical make-up.

"We are also exploring the mechanisms of spreading and the relationship of tau tangles with senile plaques," says Lee. "We believe that this newly described transmission model may more faithfully recapitulate human Alzheimer's pathogenesis than the conventional transgenic mouse models of overexpressing mutant genes that develop aggregates. Exploring if this injection-transmission model is more appropriate for the progression of Alzheimer's, as well as Parkinson's, is another priority."