Transients and synchronization are unified in ecological networks 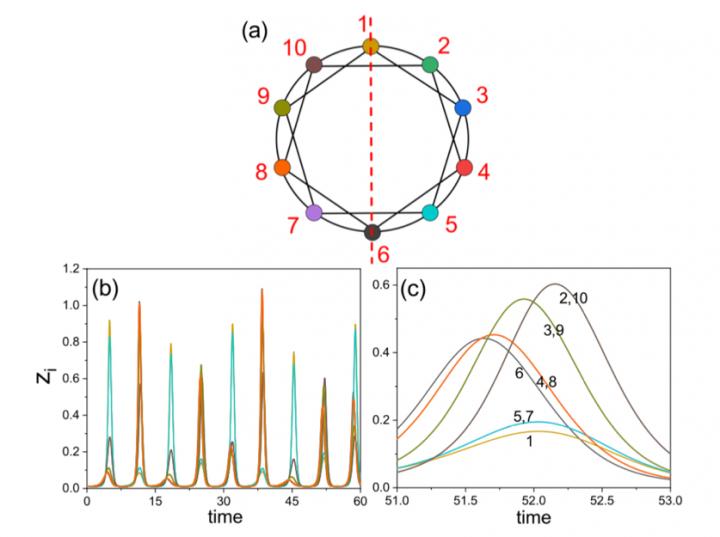 image: (a) The model of ecological network. Vertical dashed line denotes the reflection symmetry. (b) Representative time series of the predator populations. All patches are synchronized in phase. (c) A magnification of the time series in (b). Patches 2, 3, 4 and 5, are completely synchronized with patches 10, 9, 8 and 7, respectively, signifying a state of 4 synchronization clusters.

Synchronization and transients are two fundamental phenomena in nonlinear and complex dynamical systems, and they also emerge ubiquitously in ecology and evolutionary biology. Synchronization is commonly observed in spatially extended ecological systems and is regarded as the dynamical basis for the emergence of ecological cycles and orders, yet there is little understanding of the underlying mechanism. Likewise, transient dynamics are fundamental to the conservation and management of ecological systems, yet the analysis of transient dynamics in spatiotemporal ecological systems remains a challenge. The two phenomena, which have been studied separately in the past, are unified in a recent study by Huawei Fan and Xingang Wang from Shaanxi Normal University, Ling-Wei Kong and Ying-Cheng Lai from Arizona State University, and Alan Hastings from University of California Davis. The paper, entitled "Synchronization within synchronization: transients and intermittency in ecological networks" is published in the Beijing-based journal of National Science Review.

The class of systems studied is a ring-structure ecological network of patches, each with a chaotic predator-prey type of dynamics. Each oscillator describes the local population dynamics of a patch, in which there are three interacting species: vegetation, herbivores and predators. When isolated, the dynamics of the oscillators are chaotic. The oscillators are coupled with each other through the migrations of herbivores and predators. In the presence of couplings, all oscillators are synchronized in phase. The authors found that, enclosed within phase synchronization, complete synchronization in both phase and amplitude of the abundance oscillations can emerge among certain subsets of the patches.

Ecologically, in addition to transients in patch synchronization dynamics, the finding implies that the ubiquitous phenomenon of population cycles can possess a more organized dynamical structure than previously thought: not only do the populations in all patches exhibit the same trend of variation as characterized by phase synchronization, but certain patches can also have the same population at any time even they are not directly coupled and are separated by a large distance. In fact, nearby patches, in spite of being directly coupled, may not be completely synchronized. The results establish the possibility and the dynamical mechanism for the occurrence of spatially "remote" synchronization in ecological systems.

For the field of ecology, the study reveals the fundamental role played by network symmetry in the emergence of dynamical patterns in spatiotemporal ecological systems, which can be potentially used to explain some intriguing, counterintuitive synchronization phenomena. For example, in a previous work on a class of dispersal ecological networks, it was found that randomizing the structure of an otherwise regular network tends to induce desynchronization with prolonged transient dynamics. This contrasts the result in the literature of complex networks where synchronization is typically favored by creating random shortcuts in a large regular network. The paradox is naturally resolved by resorting to symmetry considerations: adding random shortcuts destroys the network symmetries and, consequently, the corresponding synchronization patterns.

For the field of nonlinear dynamics and complex systems, the finding extends our knowledge on the synchronization behavior of coupled dynamical systems. Cluster synchronization and synchronization patterns are widely recognized as the dynamical basis for the functioning and operation of many realistic complex systems. An important feature of the patterns, as revealed by various empirical and experimental studies, is that they are non-stationary, i.e., with time the system can switch dynamically among different patterns. The current study reproduces successfully this non-stationary pattern and, more importantly, provides a general underlying mechanism: transient synchronization.

The finding provides insights into the management and conservation of ecological systems, and the theory developed and the mechanism uncovered can be generalized to broader complex dynamical systems for a deep understanding of the interplay among synchronization, transients, intermittency, and nonstationarity.