A new study published in the June 2013 issue of the journal Education (Vol. 133, No. 4)* shows practice of the Transcendental Meditation® technique was associated with higher graduation rates, compared to controls.

Higher graduation rates affect not only the academic and personal life of the individual students, but also society as a whole. Graduation (versus dropping out) from high school translates into higher earning potential, less crime and incarceration, and less dependence on government assistance programs.

The most recent data shows that only 69 percent of students graduate from our nation's schools. Over the next decade it is estimated that more than 12 million students will drop out of school, resulting in an estimated loss to the nation of nearly $3 trillion.

"While there are bright spots in public education today, urban schools on the whole tend to suffer from a range of factors which contribute to poor student academic performance and low graduation rates," according to lead author, Robert D. Colbert, Ph.D., associate professor, and director of Neag School of Education's Diversity Council at University of Connecticut. "Students need to be provided with value-added educational programs that can provide opportunities for school success. Our study investigated one such program, Transcendental Meditation, which appears to hold tremendous promise for enriching the lives of our nation's students."

Analysis of school records at an East Coast urban high school was conducted with all 235 students enrolled during their senior year to determine on-time graduation. Findings showed a 15% higher graduation rate for the entire meditating group compared to non-meditating controls, after taking into account student grade point average. Subgroup analysis further indicated a 25% difference in graduation rates when considering only the low academic performing students in both groups. 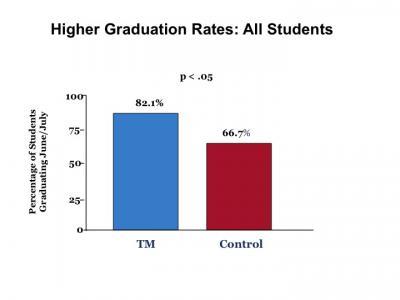 Analysis of school records at an East Coast urban high school was conducted with all 235 students enrolled during their senior year to determine on-time graduation. Findings showed a 15 percent higher graduation rate for the entire meditating group compared to non-meditating controls, after taking into account student grade point average.

According to Sanford Nidich, Ed.D, co-author and professor of education at Maharishi University of Management, "These results are the first to show that the Transcendental Meditation program can have a positive impact on student graduation rates. The largest effect was found in the most academically challenged students. Recently published research on increased academic achievement and reduced psychological stress in urban school students may provide possible mechanisms for the higher graduation rates found in this study."

Findings also showed significant differences for dropout rates and college acceptance. Meditating students were less apt to dropout from school, or enter prison, and were more likely to be accepted to post-secondary institutions. Future studies are being planned. 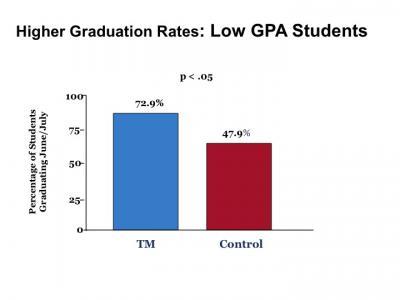 Further analysis comparing only the low academic performing students in both groups indicated a 25 percent increase in graduation rates among the meditating students compared to the non-meditating control group.