AMHERST, Mass. – In the largest regional study of its type to date, marine ecologist Michelle Staudinger and colleagues offer better understanding of the feeding ecologies of two very rare sperm whale species in waters off the southeast U.S. coast, adding baseline data they say are important as climate change, fishing and pollution alters the animals' environment and food sources.

"Understanding what resources support populations of these incredibly rare animals is important to conservation," Staudinger, adjunct assistant professor in environmental conservation at the University of Massachusetts Amherst, says of the pygmy and dwarf sperm whales she studied. "If there are changes in the environment or their prey, we can now hope to better anticipate the potential impacts. There had been quite a knowledge gap about these animals, but this work gives us an idea of their ecological niche and requirements in the current environment."

For the investigation, which used two complementary methods to characterize whale foraging ecology, Staudinger and colleagues at the University of North Carolina Wilmington (UNC) analyzed stomach contents collected by the marine mammal stranding network from 22 pygmy and nine dwarf sperm whales found dead on the mid-Atlantic coast between 1998 and 2011. Study results appear in the April issue of Marine Mammal Science.

These whales in the genus Kogia feed almost entirely on beaked squid, cephalopods whose bodies are digested in whale stomachs except for the hard beaks made of chitin, a fingernail-like substance. Staudinger explains, "All deceased stranded marine mammals are necropsied, and scientists save and evaluate the stomach contents. So the stranding network had a stockpile of stomachs collected over 13 years from two of the most commonly stranded whales along the southeast and mid-Atlantic coast."

She adds, "Here I have to confess that I have a kind of unusual ability I learned in earlier research: I can identify cephalopod species by their beaks, a characteristic similar to birds. So when I heard about this study, I jumped at the chance to study these whales."

Some cephalopod species she couldn't recognize from her own reference samples, the marine ecologist noted, "so I went to the Smithsonian Institution's collection, where there are hundreds of species in collections of whalers and fishermen dating back to the 1800s." 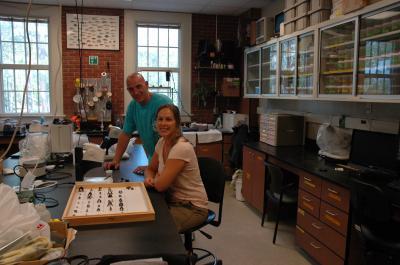 Researchers analyzed stomach contents collected by the marine mammal stranding network from 22 pygmy and nine dwarf sperm whales found dead on the mid-Atlantic coast between 1998 and 2011.

Specifically, Staudinger and colleagues hoped to identify differences, if any, in ecological niches occupied by pygmy and dwarf sperm whales. These smaller cousins of the sperm whale were once thought to be a single species until modern analyses showed they are genetically distinct.

Beak analysis from cephalopod remains showed the diet of pygmy sperm whales to be more diverse than that of the dwarf species, the researchers report, and prey sizes were slightly larger for the pygmy than for the dwarf, but not statistically significantly so.

In the second analysis, they evaluated ratios of carbon and nitrogen isotopes in whale muscle samples, an indicator providing information on which habitats the whales were feeding in. That is, the eco-zone (e.g., mesopelagic and bathypelagic) and approximate depths where whales were feeding and whether their diets contained prey high on the food chain such as fish, or lower such as small crustaceans. Staudinger says, "As far as we know this the first time the isotopic signatures have been published for dwarf sperm whales."

She adds that isotopic tracer data suggest these two rare species, while not exactly the same, showed no significant differences in foraging parameters. "We found the ecologic niche of the two species is very similar in U.S. Atlantic waters, which is consistent with other global studies," Staudinger summarizes. "The pygmy sperm whale consumes a greater diversity and size of prey, which means they may be diving deeper than dwarf sperm whales to feed, this makes sense because pygmy sperm whales grow to larger sizes than dwarf sperm whales, however, this could also be an artifact of small sample sizes."

This is important information, Staudinger says, because if these two species show no evidence of resource partitioning there are likely enough food resources to support both their populations in the region. Though if resources shifted or became limiting, pygmy sperm whales would likely have an advantage over dwarf sperm whales as they show evidence of being able to exploit a wider range of food resources and habitats.

In the future, Staudinger plans to expand her expertise in deep-sea squid ecology through additional studies of marine mammals with UNC Wilmington, and a new investigation of cephalopod biodiversity on the Bear Seamount in the North Atlantic with the Smithsonian Institution, and the National Marine Fisheries Service National Systematics Laboratory.

Source: University of Massachusetts at Amherst