RIVERSIDE, Calif. (http://www.ucr.edu) -- When we think of a galaxy the first thing that comes to our minds is an assembly of stars. Indeed, the stars of a galaxy are one of its most important characteristics.

To understand the physics of the evolution and formation of galaxies it is crucial to know at what rate galaxies form stars, referred to as the star-formation rate. This rate shows how active a galaxy is: young galaxies with large amounts of gas form many stars, while red and old galaxies that have depleted their gas reservoirs do not actively form stars.

Cosmological events such as mergers between galaxies can also boost the star-formation rate. However, unless we are observing the Milky Way and very close local galaxies, we cannot detect individual stars and star-forming regions in distant galaxies. Therefore, we need to rely on global observable characteristics to estimate the star-formation rate of galaxies located far away. 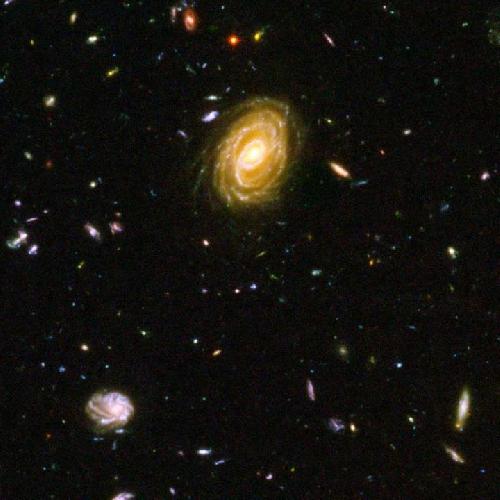 The best way to fully understand the properties of galaxies is by studying them at a broad range of wavelengths; as each type of light is emitted from a different actor in a galaxy. For example, the ultraviolet light comes from the youngest and most massive stars, while the optical and near-infrared continuum light is emitted mostly from more evolved stars. Infrared light, on the other hand, traces dust in a galaxy, and emission lines that are detected in spectral lines trace the gas clouds.

In paper published online March 22, a group of researchers, led by Irene Shivaei, a University of California, Riverside graduate student, observed 17 bright distant galaxies with the MOSFIRE high-resolution near-infrared spectrometer at the W. M. Keck Observatory telescopes. Then, they combined the spectra with infrared images of the Spitzer Space Telescope, the Herschel Space Observatory, and optical images of the Hubble Space Telescope, to create a complete multi-wavelength picture of their galaxies: from rest-frame ultraviolet to rest-frame far-infrared.

They looked at various observables that are commonly used to estimate the star-formation rates in galaxies and compare them with each other. These star-formation rate estimators include the ultraviolet light that is emitted from young stars, the infrared light that shows how much of the ultraviolet light was absorbed by dust, and the nebular emission lines that are caused by young stars making the clouds of gas around them glow and radiate. These diagnostics have been observed and tested for local galaxies extensively in the past decade, but for distant galaxies it is challenging to acquire complete multi-wavelength datasets.

This study makes the first direct comparison between the optical emission line and the ultraviolet and infrared tracers of star formation and indicates that, despite the underlying uncertainties, astronomers can trust the nebular emission lines as robust indicators of the star-formation rate and the amount of light that is obscured by dust in distant galaxies.

These results help to build the foundations of galaxy evolution studies, in other words, help predict a physical quantity (in this case, the star-formation rate) of a distant galaxy from the light that our telescopes capture.

This analysis is part of the MOSFIRE Deep Evolution Field (MOSDEF) survey, which is conducted by astronomers at UC Riverside, UCLA, UC Berkeley, UC San Diego. The MOSDEF team uses the MOSFIRE spectrometer on the the W. M. Keck Observatory telescopes to obtain spectra for many galaxies that are located at 1.5 to 4.5 billion years after the Big Bang, the interval in which the universe formed the highest amount of stars in its history. The goal of the survey is to study the stellar, gaseous, and blackhole content of galaxies at this important era in the history of the universe.

The paper was published in the Astrophysical Journal Letters. It was authored by researchers at UC Riverside, UCLA, UC Berkeley, UC San Diego, Harvard University and the National Optical Astronomy Observatory in Tuscon, Ariz.