Swift predators are common in the animal world but are rare in the plant kingdom. New research shows that Drosera glanduligera, a small sundew from southern Australia, deploys one of the fastest and most spectacular trapping mechanisms known among carnivorous plants.

The study, published Sep. 26 in the open access journal PLOS ONE, is a collaboration between the Plant Biomechanics Group at the University of Freiburg and private sundew cultivators from Weil am Rhein, and provides the first experimental demonstration of fast-moving snap tentacles in sundew plants propelling prey into the plant's leaf trap, where they are captured and digested. The authors also provide a biophysical explanation for the quick motion of these touch-sensitive tentacles.

Glue-covered tentacles and leaf traps in sundew species work like flypaper to trap insects, but this is the first study to show how fast-acting 'snap' tentacles are involved in prey capture. The researchers found that insects walking on the snap tentacles trigger a touch-sensitive catapult action, propelling prey onto the nearby glue tentacles. Glue tentacles then gradually move the prey down to the leaf trap for digestion and assimilation.

The authors suggest that these catapulting snap tentacles could help increase the reach of a leaf trap beyond just the glue tentacles, and perhaps allow the plant to capture larger insects that may be strong enough to struggle free of the glue tentacles alone. Catapulting prey towards the center of the plant could also improve digestion of the insect and prevent theft of the captured prey by other predators.

"Such plants are of particular interest to plant biologists because of their sophisticated and complex structural and mechanical adaptations to carnivory", says Thomas Speck, lead author on the study. 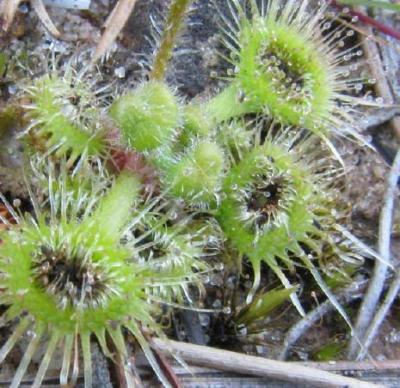 This shows snap tentacles in sundew. 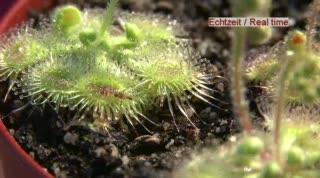 This image shows how snap tentacles capture an insect.