To speed up reproduction, there's no substitute for the tender touch of a live cockroach.

That's the major takeaway from a North Carolina State University study examining whether artificial antennae – in this case, duck feathers – can mimic a cockroach antenna's capacity to hasten reproduction in cockroach females.

Pairing two cockroaches together – even roaches of different species – speeds up reproduction the most.

"To understand the mechanisms behind tactile stimulation and reproduction, we devised a motor-driven system using duck feathers as stand-ins for cockroach antennae. We found that these artificial antennae worked to stimulate certain hormones that speed up reproduction in the female German cockroach," says Dr. Coby Schal, Blanton J. Whitmire Professor of Entomology at NC State and the senior author of a paper describing the research. "We also found that the shape of the artificial antenna doing the 'touching' and the speed and duration of the stimulation were key factors that influenced reproduction speed." 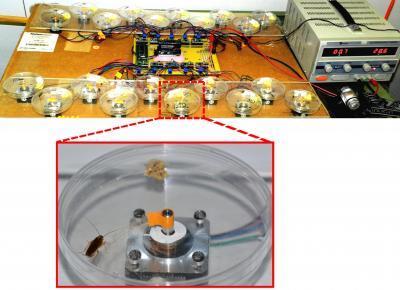 To elucidate the role that tactile sensation plays in reproduction, the researchers, led by first author Adrienn Uzsak, a former Ph.D. student in Schal's lab, performed a number of experiments. Throughout all the experiments, the researchers showed that isolating female roaches, or exposing them to dead roaches, slowed the reproductive process.

Isolating a female cockroach in a Petri dish while allowing another cockroach's antennae to protrude into the dish sped up reproduction greatly, but cutting the interloper's antennae down to nubs stifled reproduction speed to that of roaches in isolation.

"In studies over the years, we've learned how challenging it is to pinpoint the role of tactile stimulation in reproduction, although we knew from the start that it was important," Schal said. "Now we've learned that, under the right conditions, artificial antennae – including some that are quite different from cockroach antennae – can speed up reproduction, clarifying the importance of antennal contact and the role of antennal movement. Now that we have an experimental approach for consistent tactile stimulation, our next challenge is to understand how these stimuli cause females to produce more of the hormone that accelerates reproduction."