Singapore, 11 September 2013 – By binding multiple molecules of a common leukemia drug with nanodiamonds, scientists from the National University of Singapore (NUS) and University of California, Los Angeles (UCLA) managed to boost the delivery of the drug to leukemic cells and retain the drug within the cells to combat the cancer.

This novel discovery, reported for the first time, addresses one of the major challenges in the treatment of leukemia where the cancer cells develop ways to pump drugs out of the body before they can do their job, particularly after they are exposed to chemotherapeutics.

Dr Edward Chow, Principal Investigator at the Cancer Science Institute of Singapore and Assistant Professor at the Department of Pharmacology, Yong Loo Lin School of Medicine at NUS, in collaboration with Professor Dean Ho of the UCLA School of Dentistry, this innovation shows promise for greater efficacy in treating leukemia, particularly in non-adherent cells.

The findings were first published online in the medical journal Nanomedicine: Nanotechnology, Biology, and Medicine.

Daunorubicin is currently one of the most common drugs used to treat leukemia. The drug works by slowing down or stopping cancer cells from growing, causing many of them to die. It is also common, however, for leukemia to become resistant to this drug after treatment.

One mechanism by which this opposition, commonly known as chemoresistance, happens is through the expression of drug transporter pumps in leukemia cells that actively pump out chemotherapeutics, including Daunorubicin.

Innovative use of nanodiamonds

Current approaches to neutralising chemoresistance have centred on developing competitive inhibitors. These efforts have limited success, with challenges like high toxicity levels and less-than-promising results during clinical trials. 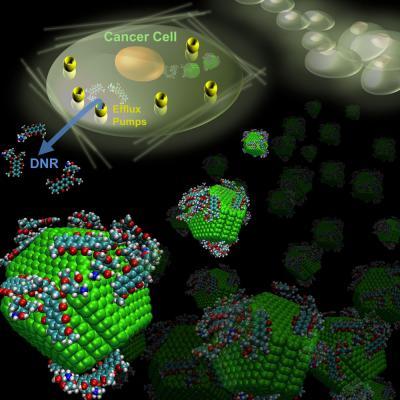 By binding multiple molecules of Daunorubicin with nanodiamonds, scientists from NUS and UCLA managed to boost the delivery of the drug to leukemic cells and retain the drug within the cells to combat the cancer.

The team of scientists from NUS and UCLA turned to nanodiamonds, which are tiny, carbon-based particles that are 2 to 8 nanometers in diameter, as an option to address chemoresistance. Dr Chow studied the biological basis of how nanodiamonds can potentially overcome chemoresistance.

The scientists bound the surfaces of nanodiamonds with Daunorubicin, and the hybrid nanodiamond-drug complexes were introduced to leukemic cells. The research team found that nanodiamonds could carry the drug to the cancer cells without being pumped out. Due to their non-invasive sizes and unique surface features, nanodiamonds can be easily released without blocking up blood vessels.

Dr Chow said, "The use of nanodiamonds offers a promising combination of biocompatibility and the capability to enhance therapeutic efficacy. Furthermore, our initial safety tests both in vitro and in vivo indicate that they are well tolerated which is a promising step towards continued translational development."

"Nanodiamonds are promising therapeutic vehicles, and one of our current goals is to determine which drugs would be optimally delivered by the nanodiamond towards specific disease models that would best benefit a patient in the future," added Prof Ho, who is with the Division of Oral Biology and Medicine and is also Co-Director of the Jane and Jerry Weintraub Center for Reconstructive Biotechnology at the UCLA School of Dentistry. Dr Ho is also a Professor of Bioengineering at UCLA.

The team noted that further development and safety evaluation of nanodiamond systems are necessary to realise their full potential. To further the research, the multi-disciplinary team of collaborators will be evaluating the drug-delivery complexes in clinical settings. They hope that their work can be translated into the clinic for use against leukemia that does not respond to Daunorubicin treatment. They are also look at applying the binding properties of nanodiamonds to other drugs.