SAN FRANCISCO -- While some dream of the day that aerial drones deliver their online purchases, scientists are using the technology today to deliver data that was never available before.

About 5,000 meters high in the Peruvian Andes, the scientists are mapping glaciers and wetlands in the Cordillera Blanca mountain range with 10-centimeter precision to gauge how climate change will affect the half-million local residents who rely in part on those glaciers for their water supply.

Their strategy provides a template for research teams that are investigating water security in other areas of the world with much larger populations, including China and India. 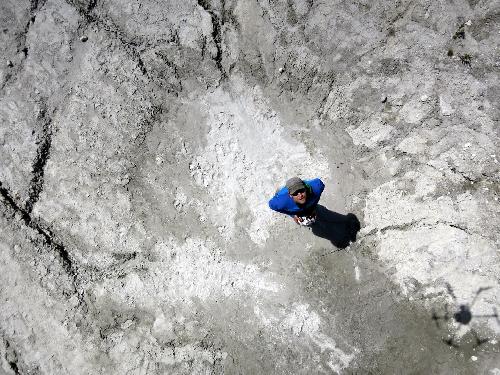 Though the study is just beginning, one early finding is that the Cordillera Blanca has a healthy groundwater system, said Oliver Wigmore, a doctoral student in geography at The Ohio State University.

"In this area, glacier melt provides up to 50 percent of the water during the dry season, and people use it for farms, hydroelectricity and to drink," he explained. "We know the glaciers are disappearing, so there will be less water available for the dry season in the future. But what my colleagues and I have found is that the groundwater system is storing some of the glacier melt as well as precipitation. There will still be a significant drop in water supply eventually, but there may be some potential for the groundwater to buffer it."

He presented the results in a poster session on Thurs., Dec. 17, 2015 at the American Geophysical Union meeting in San Francisco.

Wigmore also presented measurements that suggest a key glacier in the region's Llaca Valley is changing rapidly. He recorded an average of 0.7 meters of thinning in one year with a maximum of 18 meters of loss in some locations. For example, an ice cliff at the leading edge of the glacier collapsed over a two-week period early in 2015.

That's the bad news. But the good news about the groundwater system would have been very hard to obtain without special high-altitude unmanned aerial vehicles (UAVs) that Wigmore designed and built, and time-lapse thermal camera systems that colleague Jeffrey McKenzie at McGill University developed.

"UAVs offer some of the best technology available today for gathering data on a scale to inform local water management decisions," Wigmore said.

With Ohio State Associate Professor of Geography Bryan Mark, Wigmore, McKenzie and their team are using technology to overcome the clouds, rough terrain and thin air that prevent easy access to ice on the Cordillera Blanca.

Mark explained why the glaciers of the Cordillera Blanca are important.

"All glaciers are a really important source of information about climate, whether it's the amount that they are receding or past history from ice cores," he said. "But right now, we're acutely concerned for the water resource that they contain. All over the world, glaciers are close to rapidly expanding urban areas and extensive agriculture, both of which need water."

"Additionally, in Peru, glaciers are both a major international and domestic tourist draw, and have important spiritual significance for Peruvians. People in Peru are very worried about what the future brings," said McKenzie, an associate professor of earth science at McGill.

In the Cordillera Blanca, clouds block satellite views for all but a few weeks a year, and the terrain is too irregular to take reliable ice surface measurements by hand. Traditionally, scientists' only other option would be to fly remote sensing equipment over the ice in an airplane -- an endeavor that is not only expensive, but dangerous given the mountains' sharp changes in elevation.

The Ohio State UAVs have a 10-centimeter resolution, work despite frequently cloudy conditions in the mountains of Peru and cost a few thousand dollars each. In contrast, satellites provide a half-meter resolution at best, work only during the two months a year when the region is relatively cloud-free and cost millions of dollars.

Wigmore equipped the large, lightweight drones with high-speed motors and extra long propellers to carry them through the thin air. (Should he try to fly one at sea level, the motors would immediately burn up, he explained.)

Flying about 100 meters above the ice and wetlands, the UAVs take hundreds of pictures that overlap, providing 3-D imaging the way a pair of human eyes provide depth perception.

"It's like hundreds of eyes looking from different perspectives all across this landscape," Wigmore said. He controls part of every flight from a laptop computer, and then lets the UAV fly autonomously while it's gathering data.

As to the early data, which researchers are still processing, Wigmore described the Llaca Glacier's ice loss and collapse of the calving front as more dramatic than he would have expected.

"This glacier is usually stable, but according to the locals the collapse happened really quickly, over a couple of weeks," he said. "In March 2015 it was there, and in April 2015 it wasn't."

McKenzie's research team is using thermal infrared cameras to monitor glacier in Peru over time. These cameras, which essentially take pictures of temperature, allow his team to carefully observe what sections of glaciers are melting fastest.

"In traditional glaciology fieldwork, researchers would just record data at one or two spot locations, and extrapolate this data across a whole, huge glacier. With the new infrared camera technology, we can now instantaneously measure the temperature of the glacier everywhere, repeatedly, which is giving us new insights," she said.

"These new technologies, combined with the UAV mapping, are allowing us to observe glaciers in ways that we would never have thought possible even a couple of years ago. It is really an exciting time to be involved in this research," McKenzie added.

In recent years, scientists all over the world have started custom-building UAVs for mapping purposes. Wigmore credits the boom to new advancements in computer vision, open source software and low-cost hardware.

Whereas airplane surveys cost hundreds of thousands of dollars, and satellites cost millions, he can build a UAV for around $4,000.

The low cost is definitely a good thing, he added.

"I've crashed my equipment many, many times--sometimes catastrophically. I take spare parts and repair them in the field. If you have an off-the-shelf UAV and something breaks, you have to send it back to the manufacturer. And if you're working in the Peruvian Andes and the manufacturer is in China, you can't do that."

Wigmore adds on-board sensor systems that map the earth in visible light, near infrared and thermal infrared. Most of the cameras cost around $400 each. One thermal camera costs 10 times as much, but was donated to the project by electronics company DRS Technologies. A differential GPS system -- very important for accurate ground control data -- would normally cost tens of thousands of dollars, but the nonprofit consortium UNAVCO provided one for the portion of the study done in 2014. In 2015, Wigmore was able to borrow a differential GPS from Ohio State's Byrd Polar and Climate Research Center.