The quest for spin liquids

Post-doctoral researchers, Karim Essafi, Owen Benton and Ludovic Jaubert in the Theory of Quantum Matter Unit at the Okinawa Institute of Science and Technology Graduate University (OIST) are on a quest to find out as much as they can about unusual states of matter called spin liquids and if these spin liquids could generate advances in the field of physics. The results could lead to the development of quantum computing, which require an exploration of new materials to become a reality.

An important component of spin liquids is the rotational motion of tiny magnets carried by some atoms, also called spins. When billions of these tiny magnets in a material are nicely aligned with each other, they create an electromagnetic force. This force is the one responsible for explaining how magnets stick to a fridge.

Although the word magnet implies that a material will have an electromagnetic force, not all magnets can produce this force. However, as you cool them down, the magnets tend to form patterns, in varying degrees of complexity, but almost always in an ordered form. 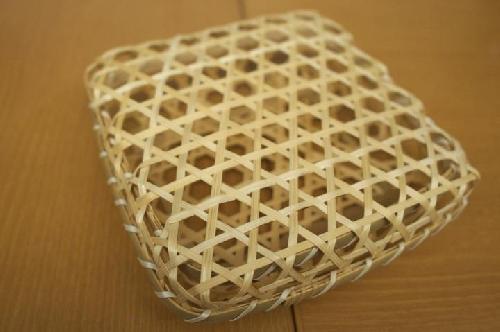 This kagome basket displays the kagome structure that inspired the name of the family of materials studied and mapped by the OIST research team. Credit: OIST

Spin liquids are the rare phenomenon that occurs when the magnets inside the atoms of a solid do not order when they are cooled, that is to say they do not exhibit the same structured state as normal solids at very low temperatures. Instead, the magnets inside of these solids continue to have movement, much like a regular liquid. In an ordinary material like water, the state of the substance becomes very disorganized at a high temperature in the gas form, but gains more of a pattern as the temperature decreases until it turns into ice - an ordered solid - at low temperatures.

"Scientifically it is completely counterintuitive. You cool down, you want to think order," Jaubert said. "For example, if you cool down water and continue cooling it down and it does not freeze. It would be so unusual."

One step in learning more about spin liquids is to create maps that categorize the spin liquids and help to understand what is happening in them. The team of researchers recently published a paper in Nature Communications, outlining a kagome map of spin liquids that demonstrates "a global picture about spin liquids," Jaubert said. Kagome refers to the lattice structure of the materials that the team studied, which is named for the Japanese woven bamboo pattern.

They show that it is possible to map one of the most studied spin liquids, onto two different and mostly unexplored models, or in other words, other potential types of materials. The unexplored models are the non-matching mirror images or chiral counterparts of each other. This shows that the two other models are also spin liquids, but with new exciting magnetic properties.

Therefore, it could be possible to find spin liquids in new materials corresponding to these two new models. The group's research suggests that it is very promising to continue the quest for spin liquids in these models, and in particular to search for the corresponding materials where spin liquids can be found. By finding the similarities that exist between the models, the team believes that this could be a step in finding similar patterns between the different branches of physics.

"We want to connect different aspects of physics together because they are all controlled by the same mathematical equations," said Jaubert.