The Neanderthal in us

Although Neanderthals are extinct, fragments of their genomes persist in modern humans. These shared regions are unevenly distributed across the genome and some regions are particularly enriched with Neanderthal variants. An international team of researchers led by Philipp Khaitovich of the Max Planck Institute for Evolutionary Anthropology in Leipzig, Germany, and the CAS-MPG Partner Institute for Computational Biology in Shanghai, China, show that DNA sequences shared between modern humans and Neanderthals are specifically enriched in genes involved in the metabolic breakdown of lipids. This sharing of genes is seen mainly in contemporary humans of European descent and may have given a selective advantage to the individuals with the Neanderthal variants.

The researchers analyzed the distribution of Neanderthal variants in the genomes of eleven contemporary human populations of African, Asian and European descent. They found that genes involved in the lipid synthesis contained a particularly high number of Neanderthal variants in contemporary humans of European origin, but not in Asians and Africans. "These sequences show signs of recent positive selection", says Philipp Khaitovich of the Max Planck Institute for Evolutionary Anthropology in Leipzig, Germany, and the CAS-MPG Partner Institute for Computational Biology in Shanghai, China. "This may indicate that they give modern humans carrying the Neanderthal genotype a selective advantage." 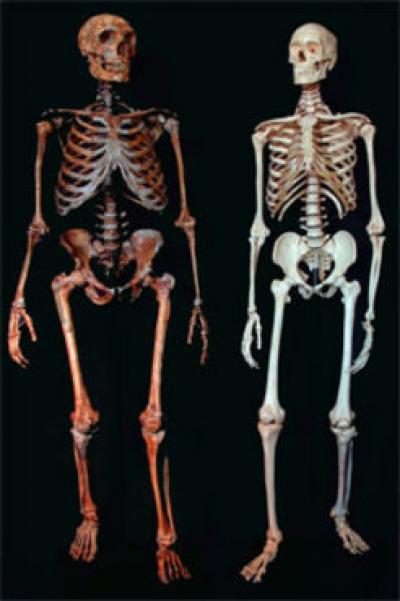 This is a skeleton of a Neanderthal (left) and a modern human (right).

Analyzing the influence of Neanderthal variants on lipid processing in modern humans, the researchers further found recent evolutionary changes in lipid concentration and expression of metabolic enzymes in brains of humans of European origin. "We don't know what these lipid concentration changes do to the brain, but the fact that Neanderthal variants might have changed our brain composition has interesting implications", says Philipp Khaitovich. Further work is needed, however, in order to fully assess the potential functional effects of these changes.