The eyes have it! How box jellyfish avoid banging into things

Box jellyfish are much more active swimmers than other jellyfish – they exhibit strong directional swimming, are able to perform rapid 180 degree turns, and can deftly move in between objects. So how do they manage to manoeuvre the obstacle course that is in the sea bed? Given that they possess an impressive 24 eyes one would think they would be well equipped for this challenge! Dr Anders Garm (Lund University, Sweden) will present data demonstrating that it is one particular sub-set of eyes that performs this job, at the Society of Experimental Biology’s Annual Meeting in Glasgow (31st March – 2nd April). 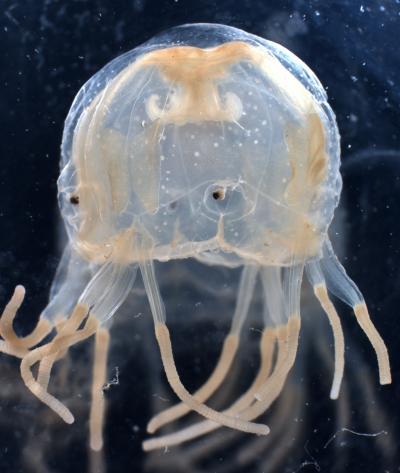 Box jellyfish have four morphologically different types of eye. Two of these eye types, called the upper and lower lens eyes, are camera type eyes with spherical fish-like lenses. Scientists measured the role of these camera eyes in obstacle avoidance in two species of box jellyfish – Tripedalia cystophora and Chiropsella bronzie. T. cystophora displayed stronger obstacle avoidance than C. bronzie which correlates well with the differences in their habitats: T. cystophora originates in the Caribbean and lives in between mangrove roots, thus their habitat is filled with relatively small vertical obstacles. C. bronzie hails from northern Australia and their habitat holds, larger obstacles, such as large stones and fallen over trees.

Results demonstrated that obstacle avoidance was visually guided and likely mediated by the lower lens eye, as it was found that the jellyfish did not respond to objects above the surface of the water which are detected by the upper lens eye. Importantly, the strength of response correlated with the intensity contrast between the obstacle and its surroundings. “Contrast is important because without contrast the object cannot be detected by any eye.” Says Dr Garm. However, there are two kinds of visual contrast; colour contrast and intensity contrast. “Obstacle avoidance is governed by intensity contrast which fits with our other data which strongly suggest that the jellyfish are, in fact, colour blind”.

Written from a news release by Society for Experimental Biology.